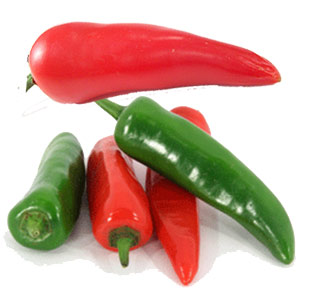 Peppers come in all sizes and colors. Their heat factor is gauged on the Scoville heat units. Read up on the beneficial properties of chili peppers.

Hot peppers can spice up any dish is a terrific way. And peppers come in all shapes, sizes and colors ... Unless you know the hotness level of a specific pepper, you could end up with an inedible meal. By and large, peppers are split into two groups - sweet and the other hot. The second group is referred as chilies or chili pepper. This was first noted by the Europeans during Columbus' voyage to the West Indies.

Peppercorns or piper nigrum, ground for use on the table and in cooking originally came from India but is now cultivated in Indonesia, Malaysia, China, Sri Lanka, Madagascar and South America, Central America and Mexico.India is still a major producer of this spice with over half of the product coming from there.

The bell pepper is the most popular of sweet peppers. These peppers are green or red or even yellow or multi colored. The hot peppers are classed by their degree of heat and Scoville heat unit scale helps to measure how hot the pepper is. Hot Cherry variety resembles a tomato more than the oblong shape associated with peppers. Removing the seeds can reduce some heat but the spiciness is in the white membrane that attaches the seeds to the inside.

In general the small pepper is more likely to be hot. Ornamental varieties tend to have high Scoville heat unit ratings. Some peppers like the Anaheim and Paprika are mildly hot, about 1000 to 8000 Scoville heat units. The Pablano with a 5000 or less rating is excellent for use in salsas. There are some peppers that are mild to hot, depending upon whether the seeds are used. Their rating would be from 5000 to 60,000. Jalapenos with a similar rating fall into the medium heat class. So too is Serranos. By far the hottest peppers are Asian and Habaneros.

True, there are thousands of varieties of peppers worldwide. While black pepper is the 'King of Spice'. Pepper fruit also known as pepper corn, is a drupe, measures about 5mm in diameter and contains one big seed at its center. Peppers can range from being so compact to gigantic, an inch to a foot in length, and they come in myriad hues.

All chile peppers are various species of the genus Capsicum plant family. Red chili peppers are available throughout the world and while they are related to egg plants and tomatoes, surprisingly they are not related to the black pepper. The latter hails from the Piperaceae family.

Like cayenne pepper, red chili peppers are available throughout the year to add zest to flavorful dishes around the world and health to those brave enough to risk their fiery heat.

This is the plant that puts fire on your tongue and maybe even a tear in your eye when you eat spicy Mexican, simmering Szechwan, smoldering Indian, or torrid Thai food. Chili peppers belong to the family of foods bearing the Latin name Capsicum.

There are currently over thirty known species of chili pepper. Most of them are wild pepper species found in South America. These include C ardenasii, C eximium and C chacoense.

Of the several types, only five of the pepper species are widely domesticated. They are:

C annum, meaning 'annual', is by far the largest domesticated species both in the number of different varieties and widely cultivated worldwide. With typical white flowers, when ripe, these peppers turn from green to red. Sometimes they can be seen in other colors as well. Most common and best known are Jalapeno, Poblano, Serrano, Cayenne, Bell pepper, Peperoncini and Anaheim peppers. The most unique pepper varieties include Peter Pepper and the magnificent Bolician Rainbow.

C baccatum, meaning 'berry-like' is referred locally as 'Aji'. Diffused yellow or green spots on the base of the corolla are characteristic of this variety. The peppers range in size from small berries for some wild varieties to over a foot in length. Peppers such as Aji Amarillo, Aji Colarado, Aji Andean and Lemon Drop come under this category.

C chinense, meaning 'from China' is a misnomer as it originated in the Amazon, and includes some of the world's hottest peppers with distinctive tropical flavors.The flowers are typically small and white with a fruit scent. These peppers show a greatest variance in heat levels based on environmental growing conditions. This species include the Habanero, Scotch Bonnet, Datil, Fatalii, and Billy Goat.

C Frutescens, meaning 'bushy' are characterized by compact growth, these grow upright rather than pendant and are in red, orange and yellow hue. They include the world famous Tabasco Pepper, Zimbabwe Bird Pepper, the Cambodian Angkor Sunrise and the Brazilian Malagueta.

C Pubescens, meaning 'hairy', are rare peppers characterized by furry leaves and unusually shaped black or dark brown seeds. They grow in the mountainous regions of Central and South America. Unusual with thick-walls and resembling the shape of small apples, Pubescens grow in temperate climates. Their flowers are typically purple. These species include Peruvian Rocotos, Bolivian Locotos and Mexican Manzonos.

The Scoville Scale is the measurement of the pungency or spicy heat of chili peppers. Invented by Wilbur Scoville, this Scoville Heat Index helps ranks peppers in order from the mildest to hottest. The number of Scoville heat units indicates the amount of capsaicin present per unit of dry mass. An active component of chili pepper, Capsaicin is an irritant which can produce a burning sensation in human beings and animals. Starting with zero, being the mildest and goes over to 1000,000 to indicate the hottest peppers.

There are dozens of different kinds of peppers and some widely used pepper types include:

Bell pepper: These are red, yellow, green or orange and are not hot. They are sweet peppers and its Scoville Heat Index is Zero. Bell pepper can be cooked in a variety of ways although it does not spice up the food.

Cherry peppers, also known as pimento peppers are heart shaped and are very mild, scoring about 500 on the Scoville Heat Index. These are perhaps best known to be the red filling found inside of olives.

Anaheim pepper is another mild type which is long, skinny and maroon in color. Anaheim usually has a Scoville Heat Index around 1000 with some varieties rating as high as 5000.

Arguably one of the most famous of chili peppers, Jalapeno is enjoyed for its warm, burning and spicy taste. Jalapenos are usually either red or green and their Scoville Heat Index is around 5000, however they can range anywhere from 2000 to 8000. Discerning use of Jalapenos in dishes can make it both palatable and immensely enjoyable at once.

Serrano pepper, similar to Jalapeno in its look is much hotter with the Scoville Heat Index between 10,000 and 25,000. This pepper is usually small and green in color – and the pepper thumb rule says, the smaller the Serrano pepper, the hotter it will taste.

Cayenne pepper is another hot pepper, between 25000 and 50000 on the Scoville Heat Index and popular with those looking to add heat to food. Cayenne pepper is red in color and generally dried and used in powder form. This is also used in natural medicines for hundreds of years as a suitable herbal remedy for various health problems.

The pepper that is used to make the famous 'Tabasco sauce' the pepper of the same name exhibits a Scoville Heat Index between 30,000 and 60,000.With about 4 cm long tapered fruit, Tabasco pepper is initially pale yellowish-green and gradually turn into yellow and orange before they ripen into bright red color.

Known variably as Bird's eye chili, bird's chili, the Thai chili is commonly found in Southeast Asia. With Scoville Heat Index of 50,000 to 100,000 Thai chili is valued for its extreme spiciness and is added to rev up several traditional dishes. Interestingly, this is one of the smallest in the pepper family, with less than an inch in size.

Cultivated in Bolivia and Peru for several thousands of years, Rocoto is an amazing pepper appearing with thick walls like bell pepper but is extremely hot. Between 100,000 to 250,000 in the Scoville Heat Index, this pepper is the size of a bell pepper but is rounder and typically only red or green and used to make very spicy sauces.

Ghost pepper, also known as Naga Jolakia is literally the hottest pepper in the world. Certified once in 2006-7 by the Guinness World Records as the world's hottest pepper, about 400 times hotter than Tabasco sauce, Ghost pepper exhibits a Scoville Heat Index of over 1,000,000. Even one seed from this pepper can have her mouth burning for up to half an hour.

All peppers, by and large, show health benefits as they contain such high Vitamin C and A and exhibit antioxidant properties. Black pepper stimulates the taste buds in such a way that an alert is sent to the stomach to increase hydrochloric acid secretion, thereby improving digestion.

Capsaicin has anti bacterial and anti carcinogenic, analgesic and anti diabetic properties. It is found to reduce LDL cholesterol levels in obese individuals.

Fresh Jalapeno peppers are a rich source of Vitamin C and ripe fruits have more of this vitamin than raw greens. Vitamin C is a potent anti oxidant and it is required for collagen synthesis of the body. Regular consumption of food with Vitamin C helps the body protect from scurvy, and develop resistance against infectious agents.

Vitamin E and Vitamin K are also found in peppers. Vitamin K especially increases bone mass by promoting osteotrophic activity in the bones. It has a beneficial effect in Alzheimer's disease by limiting neuronal damage in the brain.

Red pepper in various forms show promise in enhancing metabolism, increase satiety and potentially stimulating fat burning too.
Cayenne and crushed red pepper and paprika can spice up hummus, guacamole, cottage cheese and even mashed potatoes. It can give marinades or dressings a kick and with a little cayenne or sprinkle paprika to fish for a tasty change.

In Chinese restaurants especially, it is quite common to find a number of dishes spiced up with Asian peppers. Be it Mongolian Beef or Kung Pao Chicken, it can pack quite a punch if one accidentally eats a whole one. In a menu which claims that a dish is spicy, beware the tiny Asian pepper.