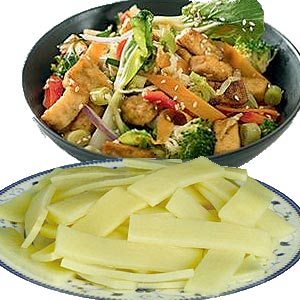 Bamboo shoots have been extensively used in Asian cuisine and are hailed for their nutritive value coupled with their low fat and cholesterol levels. Pick up simple bamboo shoots recipe and tips on cooking them.

Bamboo is a woody grass from the family Poaceae. It is often grown for ornamental use and the wood is used for various household goods. As bamboo grows it becomes harder and develops a series of joints. Hence, bamboo is preferred as a sustainable source of raw wood for things like paper and furniture.

Bamboo shoots are the extremely young growth of the bamboo plant and have a tough exterior, but a tender inner core with a faintly sweet flavor.

Bamboo shoots are a good source of potassium, a heart-healthy mineral that helps maintain normal blood pressure and a steady heart beat. One cup of bamboo shoots a day provides 640mgs of potassium, which is 18% of the recommended amount. Including bamboo shoots in your diet can provide you with zinc, phosphorus, riboflavin, niacin, thiamine and iron.

Bamboo shoots are low in fat and calories. One cup of half-inch long slices contains a mere 14 calories and half a gram of fat. The shoots are also a good source of fiber and a serving of one cup of the grain provides about 2.5gms of fiber, which is approximately 10% of the recommended amount needed a day.

Fiber helps keep cholesterol levels in control and plays a vital role in preventing colon cancer. Containing no fat or cholesterol and yet providing you with plenty of health benefits, tender bamboo shoots ensure healthier bowel movements and enhance your skin. Little wonder that bamboo shoots are popular with those trying to lose weight.

Bamboo shoots are rich in phytochemicals containing lignans and phenolic acids. Lignans, a component of fiber, exhibit a number of important properties - anticancer, antibacterial, anti-fungal and antiviral activity. Phenolic acids have mild anti-inflammatory properties and are potent antioxidants, which help prevent cancer and the blood vessel injury or atherosclerosis.

Peel the bamboo shoots before cooking. Peel off the outer leaves and trim the roots. Remove any tough flesh of the shoots before cooking. However, tender leaves can be left attached and eaten. Do not eat the shoots raw as they might taste bitter and can be hard to digest. Cut them into the patterns you like or slice them into one-eighth inch slices.

Cook the grains in boiling water for 20 minutes. Use an uncovered pan to allow the bitterness of the bamboo shoots to dissipate into the air. If you still find the shoots tasting bitter after cooking, boil them in fresh water for 5 more minutes. Alternately, you can microwave the shoots in an uncovered shallow pan of water for four minutes. Remove the shoots from microwave once they are crispy and crunchy.

Overcooking bamboo shoots destroys their taste and nutritive value. To retain their crunchy texture, add bamboo shoots as the last ingredient in dishes. You can serve bamboo shoots as a vegetable side dish with a bit of butter and pepper or soy sauce. Add them to salads, soups, vegetable combination dishes or stir-fry. Marinate bamboo shoots in rice vinegar, sesame oil and soy sauce for several hours. Then use it in gravies or stir fries.

(Adapted from THE BOOK OF BAMBOO, David Farrelly, Thames and Hudson, 1984)

Place the cooked bamboo in a greased shallow baking dish. Melt the butter in a saucepan on medium heat. Stir in flour. Blend in milk and heat to thicken. Stir in cheese and add salt to taste. Pour Sauce over the bamboo and bake in an oven at about 350 F for 30 minutes. Sprinkle paprika on top and serve.

½ lb mixed vegetables – any of the following

Buy bamboo shoots that indicate shoots in/with bai vanang leaves for this recipe, where the shoots will be partially shredded. However, shred the shoots fully to produce independent strands. Boil the shredded shoots in water or its juice and remove from heat once boiled.

Add all the ingredients and bring to a boil over high heat in a saucepan. Reduce the heat and simmer for 10 minutes. Serve the hot soup.

How to store bamboo shoots

Fresh bamboo shoots can be refrigerated for up to two weeks. A bitter taste develops if kept longer, or if the shoots are exposed to sunlight. Ensure to store whole, unpeeled bamboo shoots in the crisper drawer of the refrigerator. Fresh shoots can also be cooked and then frozen.

Where to find bamboo shoots