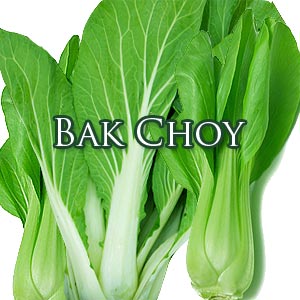 Bok Choy or white cabbage lends itself easily to many a dish, as it complements the other ingredients and condiments. The health benefits of bok choy are plenty. Use it in salads, stir fry and soups.

Often referred to as white cabbage or Chinese cabbage, bok choy is a cruciferous vegetable used in Chinese cooking. It is mainly used in soups, stir fries, appetizers as also in main dishes. This vegetable belongs to the cabbage family and is referred to as pak choi by the Chinese.

The mild sweet taste of bok choy makes it a versatile vegetable that can be adapted for cooking in a variety of dishes. It has thick, white stalks and dark green leaves that are round. In Hong Kong there are twenty varieties of bok choy. Baby bok choy is famous in Asian markets. Bok choy can be stored in the crisper section of the refrigerator by wrapping in paper towels or plastic bags. It can last up to a week when stored properly.

Bok choy is usually cooked much like cabbage. Baby bok choy should be cooked as a hole. While cooking a full grown bok choy, first remove the leaves from the stalk and chop the stalk. Then chop the leaves, both the stalk and the leaves are edible. The stalk can be eaten in raw form too. If the bok choy is over cooked it would become too soft and might not taste good. Use bok choy as a healthy alternate to cabbage.

A low calorie vegetable, bok choy is rich in calcium, vitamin-A and vitamin-C. Bok choy provides nutrients such as folate, fiber, calcium and potassium. Benefit from indoles - phytochemicals in bok choy that aid in deactivating potent estrogens that contribute to stimulating breast tumors. While buying bok choy, ensure to:

Cooking bok choy
Each part of the vegetable can be used to cook or enhance the flavor of a dish.

Mix bouillon granules, soy sauce, pepper, water and garlic powder in a large saucepan. Bring to boil. Add the bok choy. Reduce the heat and cook for about 5 minutes. Blend the light cream and cornstarch and stir into bok choy. Cook until the mixture gets thick and bubbly. Serve warm.

In a frying pan, pour cooking oil. Add garlic and ginger and allow it sizzle in oil until golden brown. Add bok choy, and toss well until each leaf is coated well with the ginger and garlic. Pour in the water. Cover and cook for 1 minute. Season with salt and add a drop of sesame oil on top.

Over medium heat, heat oil in a saucepan. Add bok choy, ginger, garlic and pepper. Stir fry for about 3 minutes. In another bowl, mix the water, dissolved bouillon, soy sauce, cornstarch and sugar. Mix well. Stir in this mixture to the bok choy and stir fry until the mixture thickens and the bok choy gets tender. Serve hot.

In a bowl, mix beef, green onion and spices (katakuriko, sugar, sesame oil, sake, soy sauce, garlic and ginger) in a bowl. Mix the spices for sauce in a bowl (soy sauce, oyster sauce, sake, sugar). In a frying pan, heat oil and stir in the beef mixture over high heat. Add bok choy and mushroom, stir for another 3 minutes. Add mixed spices for sauce and stir for 2 minutes. Serve hot.

Baby bok choy is the tender version of bok choy. It is usually used as a whole piece in salads, soup and stir fry. Baby bok choy cooks fast and is considered conducive to digestion.

Cut the bok choy in half lengthwise. Heat oil in a large skillet over medium heat and fry garlic until fragrant. Add bok choy and 3 tbsp water. Cover and steam until tender-crisp for about 5 minutes.

In a large sauté pan, heat olive oil on medium heat. Add the garlic, onions and the bok choy. Drizzle the sesame oil and add salt as required. Cook for 3 minutes until the bok choy softens. Lower heat and mix the cashew.

Preheat oven to 450 degree F. In a roasting pan, toss bok choy, garlic, oil and salt. Roast until wilted and tender crisp. In a small bowl, stir in the lemon zest and juice, pepper and mirin. Drizzle this mixture over the roasted bok choy.

Offering a crunchy and slight bite, bok choy when used in salad enhances the flavor of the salad.

Sauté sesame seeds, garlic powder and almonds in some butter. Add the raw noodles. In a separate bowl, mix the oil, soy sauce and sugar in a little water. Mix the bok choy with the noodle mixture and add the dressing.

In a mixing bowl, mix the rice vinegar, soy sauce, sesame oil and sugar. Toss in the bok choy. Top with cashews.

Marinate the chicken with ginger paste, light soy sauce, corn flour, egg and oil, set aside. Boil the bok choy with oil and salt for a few minutes. Drain and keep the bok choy aside. Heat oil in a wok on high flame and add the marinated chicken along with the chopped garlic, salt, chilies and dark soy sauce. Toss well and stir fry for 3 minutes. Add the rice wine and remove from fire. Transfer the chicken over the bok choy mixture and serve hot.

In a wok, add 2 tbsp of canola oil and swirl to coat all sides. Add the ginger and garlic and toss well. Add the chicken pieces and cook for about 2 minutes, until it turns white, set aside. Pour the balance canola oil and add the bok choy, stir for 2 minutes. Add the scallions and cook until the vegetables are tender. Add the chicken to the bok choy mixture and add the soy sauce and chicken broth. Cook for about 2 minutes. Serve with steamed rice.

Over medium heat, heat oil in a wok. Add garlic when the oil is hot. Sauté and then add chicken, sauté until lightly browned all over. Add the bok choy and stir fry for about half a minute until it softens. Add the soy sauce and sherry. Cover and cook until the chicken is done. Serve with steamed white rice.

Mash potatoes and add a bit of oil or margarine. Season the potatoes with nutmeg, salt, pepper and the grainy mustard. Add the bok choy and tofu pieces and mix well. Season the dish with salt and pepper and a pinch of cayenne pepper.