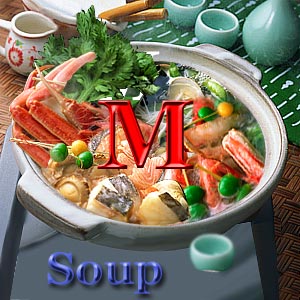 Soup revives and restores anyone and is one of the easiest to cook. See how you can put together a quick and nutritious mushroom soup from our mushroom collection here.

Soup revives and restores anyone and is one of the easiest to cook. You can make a clear soup or thick soup depending upon your fancy and the available ingredients. Soups have been with us for over 6000 years and it is another great leveler – for you can make a soup with any legumes or vegetable at hand or you can make the most out of the exotic ingredient by making a broth.

Soup has worldwide base – from the Asian miso soup to the South American Fanesca Soup, Bouillabaisse – a fish soup from France to the Mulligatawny Soup of the south Indians. Incidentally the Anglicized the Mulligatawny Soup originally referred to a thin liquid broth called as 'milagu rasam' in Tamil – a standard accompaniment to cooked rice.

We have covered several dozens of soups in our labyrinthine collections in Targetwoman. Yet we are tempted by the freshly brewed broth which goes under many names. This time we present a clutch of Soup recipes – with mushroom.

Cook the carrots, parsley, celery and onion in four cups salted water for about 20 minutes. Strain. Cook the mushrooms and second onion in another cup of water for about 10 minutes. Add salt and pepper. Combine vegetable broth and add the flour mixed with ¼ cup of vegetable stock. Boil and then remove from heat. Add sour cream, parsley. Add noodles and fine macaroni.

Micro cook uncovered on 100% power for 4 minutes till thickened and bubbly stirring twice. Combine hot mushroom mixture and dairy sour cream in a blender container. Cover and blend till the mixture is nearly smooth. Pour back into a 4 cup measure. Micro cook uncovered on 100% power till the mushroom mixture is heated through. Do not boil. Garnish with additional parsley.

Sauté mushrooms in margarine until tender in a large saucepan over medium flame. Add flour, salt and pepper and cook for a minute. Gradually add broth and milk. Stir occasionally until thickened. Add spinach and heat through.

Slice the chicken breast meat thin. Bring the chicken stock to a rolling boil and add the chicken and mushrooms. When the soup starts to boil again and all of the ingredients float to the top, remove from heat. Add the sesame oil and sherry and taste for seasoning. Add salt and pepper. Sprinkle parsley on top while serving in individual bowls.

Morels or Morchella are a genus of edible mushrooms and closely related to cup fungi. They appear honey comb like. Morels are well known for their delicious taste and they bear similarity in taste to fish.

Melt the butter and add in the flour and brown it in the frying pan. Rehydrate mushrooms for half an hour and simmer in the water used for the rehydration. Add the flour butter mixture to the simmering mushrooms and stir until it thickens.
This recipe can be used for many dishes and it is excellent with sauerkraut and perogies.

Soak fresh morel mushrooms for a day in salt water and then cut them into halves. Put the eggs in a mixing bowl and whip them with a fork like for making scrambled eggs. Start heating the oil on medium heat at 250 degrees in a large skillet.

Place the mushrooms into the eggs just long enough to coat them lightly. Place them in a gallon size zip lock bag with the flour and shake gently. After mushrooms are covered with flour place them in the skillet and cook in oil until golden brown. Add salt and pepper to taste.

Wash and clean the mushrooms. Cut them into halves or quarters depending upon the size. Mix all the ingredients except the mushrooms. Add yoghurt mixture and marinate for at least half an hour. Heat the pan and add mushrooms along with the yoghurt during serving time. Cook till yoghurt dries and coats the mushrooms. This dish is most suitable for diet watchers as it is a zero oil dish and mushrooms are fat free too.

Slice a handful of potatoes about a centimeter thick and boil them in salted water until just tender. In the meantime fry roughly the same amount of sliced portabella mushrooms in olive oil with a crushed garlic clove until cooked. Remove them from the pan. Fry the cooked potatoes in some olive oil until golden and then add the mushrooms back to the pan and heat through. Season well with salt and add a good handful of chopped flat leafed parsley.

Shell shrimp. Remove stems from mushrooms. Melt butter and add oil and sauté shallots for about 2 minutes. Add mushrooms. Cook for 10 more minutes stirring frequently. Add parsley and wine. Let it come to a boil. Now add the shrimps. Cook for five minutes till the shrimp turn pink. Season with salt, pepper and paprika to taste. Stir in sour cream and heat thoroughly. Do not boil.

These are large brown strain of the same fungus left to mature and take on a broader and more open shape before picking. They have a distinctive musky smell and because of their size and thickness of their fleshy caps they can be cooked in a range of different styles and ways including grilling and frying.

In a small bowl combine cheese and bread crumbs in equal portions. In another bowl melt one stick of butter in microwave and add minced garlic to taste. Wash mushrooms and place one at a time in butter coating both sides. Roll in bread crumbs.

Place in casserole dish and sprinkle cheese overall. Cover dish and bake at 375 degrees for about half an hour until the cheese is golden and bubbly. Serve with baby spinach and radicchio salad with honey mustard Dijon dressing. It is better to serve immediately on preparation.

Preheat in medium heat. In a large bowl mix the red bell pepper, garlic, oil, and onion powder, salt and ground black pepper. Spread mixture over gill side of the mushroom caps. Lightly oil the grill gate and place the mushrooms over the indirect heat. Cover and cook for about 20 minutes.

Crumble sausage into a wok. Cook over medium high heat until browned stirring occasionally. Drain off the droppings. Remove sausage to paper towels and set aside. Heat oil in the same wok until hot. Add onion, mushrooms, chopped red pepper and garlic. Cook and stir until vegetables are soft. Stir in sausage, spinach, cheese, salt and black pepper and cook until tender.

Set aside to cool. Preheat oven at 375 degrees and place one Phyllo sheet on work surface. Brush entire sheet with some melted butter and sprinkle ¼ of bread crumbs. Repeat layers three times. Spread sausage mixture over top and roll up starting at one short side until roll forms.

Place an ungreased baking sheet and brush with remaining butter and bake for 15 minutes till golden. Let stand for 5 minutes. Cut into 1 inch slices and garnish with thyme and pepper strips if desired. Serve hot. Refrigerate leftovers.

This mouthwatering yummy mushroom salad is healthy to eat but simple to prepare.

Take a nonstick pan and add vinegar, water, wine and garlic in it. Now heat them on a medium flame until small bubbles begin to form. Add mushrooms to it and stir properly for about ten minutes. Add margarine and pepper and stir continuously. Place mushrooms on the lettuce leaves and sprinkle with chopped parsley. Delicious warm mushroom salad is ready.