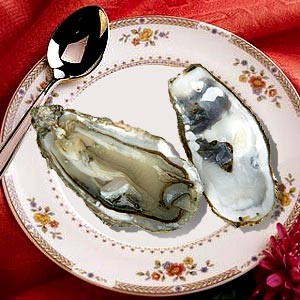 Oysters are hailed as aphrodisiacs and the prime health food in a closed shell. Learn why oysters are treated as delicious delicacies for many centuries and pick up a couple of recipes on Oyster stews.

Oysters are one of the favorite exotic foods for a long time - eaten raw or cooked in many ways - Oyster Stew one of the most popular methods. Many consider oysters as one of the aphrodisiacs possibly owing to their rich content of Zinc - a mineral essential for the production of testosterone. Zinc coupled with other essential minerals and amino acids found in edible Oysters make them one of the healthiest sea foods.

Otto von Bismarck, the 19th century Prussian and German statesman was purported to be very fond of Oysters and used to consume large quantities of them at a time.

You don't need to be an ostreaphile - an oyster lover to relish Oyster. It would suffice that you care much for health and prefer healthy diets to include Oysters in your menu. Apart from fruits, vegetables, dairy products, meat and poultry food, inclusion of two servings of oysters, rich in vitamins, proteins and Omega 3 fatty acids every week make for a healthy diet regime.

The different dietary sources of omega-3 fatty acids include fish oil, certain plants and nut oils. Amongst these sources, fish oil contains both DHA or docosahexaenoic acid and EPA or Eicosapentaenoic acid while vegetable based sources contain only ALA or alpha-linolenic acid. There is a growing body of evidence, which suggests that foods with high concentration of ALA may lead to higher risk of prostate cancer.

Pacific, Olympia and Atlantic are the three broad classifications of oysters. Though there are more than seventy edible species, only a few are grown commercially. Not all oysters taste alike. The tastes of oysters are much determined by water temperature, salinity and the vegetation on which they feed. The taste and the texture do not remain constant but differ at different times of the year.

The Olympia oysters: Are very small in size, usually not exceeding 2 inches.

There are passionate Oyster lovers who will not let any foreign substance come in the way of eating their prized food. They slit open the shells with a special knife and some cultivated skill to match - for it is not easy to pry the closed shells against the adductor muscles of the live oyster. Some add a dash of lime to enhance the taste.

Opening the shell with a shellfish fork or shucking knife and eating it raw is the simplest way of eating oysters. Especially, fresh, young oysters taste delicious raw on the half shell. If you relish eating oysters raw and uncooked, pick fresh oysters alive just before you eat them. Check if they are tightly closed for if they are already opened. It just means they are dead and need to be discarded.

Eating raw oysters is an art by itself. An oyster knife or a shellfish knife is the perfect oyster cutlery. As you set out to relish a raw oyster, use the shellfish fork and detach the oyster from its shell. Hold the oyster shell firmly and look out for the best 'sipping lip' on the shell. Bring the shell to your lips and in one swift move, slurp the oyster and the juice (liquor).

For oyster delicacy preparation use larger oysters and choose any of the cooking methods. Oysters can be cooked anyway you want as long as it is brief. Most shell fish tend to turn rubbery if overcooked. Again shell fish require little spices or other add-ons to flavor them. Oysters are akin to Wine. Select carefully your choice.

Take a wide-bottomed saucepan and warm cleaned oysters over medium heat. Transfer butter to the container and wait until the butter is milted. Transfer milk and allow it to warm. The milk need not reach the boiling temperature. Oyster stew is ready; add salt and pepper to taste. Serve oyster stew with oyster, oyster cracker or any other common cracker.

1 can fresh oysters (undrained 12 ounce can)

Chop the green onions and keep aside. Melt butter and sauté onion in butter until tender. Add the other entire remaining ingredients one after the other. In low heat, cook the ingredients until the edges of oysters begin to curl up. The mixture should not reach boiling temperature. Oyster stew is ready, serve with crackers and garnish with sliced green onion.

Shuck the oysters and place in a colander to drain. Or use shucked oysters, which are stored in vacuum-packs. Crack the eggs and beat well with a fork. Dip the drained oysters in beaten eggs. Salt and pepper may be added to breadcrumbs. Keep the breadcrumbs on a large plate. Roll the oysters dipped in beaten eggs in breadcrumbs. Coat well on all sides. Let it dry. Keep aside for 30-45 minutes.

Heat oil in a wide-bottomed frying pan. Add oysters to the oil and fry until golden brown. Fry few oysters at a time. Do not overcrowd the pan. Turn from one side to another after it becomes totally golden brown and the edges are curled. Take care not to overcook the oyster. Fried oysters are ready. Serve with hot sauce and squeeze lemon for extra flavor. Or spread fried oysters over a plate of Caesar salad.