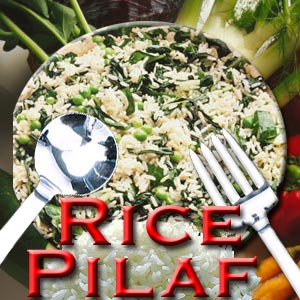 Simple rice pilaf comes to rescue with its ease in cooking and subtle flavor. Rice pilaf recipes offer well-balanced meals that are packed with nutrition and health.

Various countries in the world have rice as their basic food. Studies point out that half our planet is dependent on rice for continued existence. Though rice can be consumed plain, cooking rice along with other condiments enhances the taste. Rice pilaf is a popular rice recipe.

Is it pilaf, pilau, perloo, peelaf or perlau? Call it what you may but each region has its own rice pilaf recipe. Pilaf implies delicious grain mix cooked in a mixture of daintily chopped herbs, meat, vegetables, fruits, nuts and aromatic stocks. Rice is tossed for a short time in butter, then cooked in stock or water with an assortment of seasonings.

Rice pilaf has its origin in the Middle Eastern and Central Asian countries. A basic rice pilaf will contain any grain such as cracked wheat or rice. The broth can be seasoned with spices such as cloves, cinnamon, cardamom, bay leaf etc. Depending on the region, rice pilaf may also include an assortment of meat and vegetables.

As early as the 17th century, rice pilaf was talked about by the British writers. In the 18th century the British Empire spread through the Middle East and India and by then rice pilaf had become one of the favorite recipes in Britain. Spice trade and the Southern crops made rice pilaf popular in America too. Florida, Louisiana and South California have been relishing this dish for the past 300 years. If you been invited for supper in any church in Florida, you will never miss out on being served rice pilaf.

Every region has its own recipe to cook pilaf. Depending on the region, the ingredients vary and the blend of spices is different. Chicken, mutton, seafood or plain vegetarian, rice pilaf blends very well with any of them. Looking for a main dish or a side dish, there is almost certainly a rice pilaf recipe for you. Pilaf can be cooked in a variety of interesting combinations.

A vegetarian rice pilaf can be cooked with a combination of onions, carrot, beans, cauliflower, turnips and tomatoes with a dash of spices. A variety of meat, poultry items or sea food can also be chosen to cook rice pilaf. A Middle Eastern recipe contains chickpeas, onions, vermicelli and cumin. Or you may try out a combination of onions, carrots, cinnamon and rose water.

Yet another interesting variety of rice pilaf would be with chicken, almonds, pistachio and saffron. Another popular variety away from the Middle East is the Indian variety of rice pilaf that is made from green ginger, bananas, mangoes, cinnamon and seafood. Almond, pistachio, saffron cinnamon and citrus varieties were introduced by the Moors from Spain. Rice pilaf is called pilav by the Turkish, Bosnian, Serbian and Romanians. Indians call it pulao, Americans call it pilaf while the Persians call it polow.

Rice pilaf is easy to cook and can be easily tried by novice cooking enthusiasts too. Each region has a special way to cook rice. Pilaf tastes the best when made from long grain rice well known as basmati rice from India, Pakistan or Southern rice from the US. Cooking rice pilaf in your kitchen can be fun and. Just follow these instructions:

Read the packaging on the rice and wash the rice accordingly. Enriched rice should not be washed, whereas rice encrusted with talc should be washed thoroughly. Fry the rice lightly in butter or oil till it turns light brown. Too much browning of rice will let the rice break or get soggy while cooking further. As the rice is fried, the swelling decreases and adds on to the flavor and color.

Season the rice with a variety of spices and herbs. Dried fruits and nuts, vegetables of any type and meat too can be added to enrich the flavor of rice pilaf. All these ingredients steamed in the best stock bring out the best of rice pilaf. When cooked, the rice becomes soft and every single grain carries the taste of the recipe.

Fry the rice. Add the seasonings and choice of vegetables or meat and finally the stock. Add a little more liquid to cook - about 2 cups of liquid for 1 cup of rice. Set the rice pilaf in a baking dish covered. Bake at 350 degrees for 35 minutes. Rice pilaf is ready to serve.

Rice pilaf can by itself constitute a whole meal when it is cooked with meat. It can go very well together with grilled chicken or roasted lamb and vegetable stew. Combined with yogurt, rice pilaf makes a perfect quick snack. Leftover rice pilaf can be dressed with vinaigrette for a perfect salad.

Preheat oven at 350 degree Fahrenheit. Warm chicken broth in a pan and keep aside. Melt butter in a deep pan and sauté onions and pepper. Add rice and let it brown. Stir well while adding stock. Put into a dish and cover with wax paper.

Ensure wax paper touches the rice when placing in the oven. Bake for 20 to 30 minutes until the rice is tender and a little firm. Add parsley before you serve.

Preheat the oven to 375 degree Fahrenheit. In an oven proof sauce pan, heat oil on medium heat. Add rice and fry till brown. Add hot chicken stock, bring to boil and place in oven after covering it. Bake for 20 minutes till the moisture is absorbed. Rice pilaf is ready to serve.