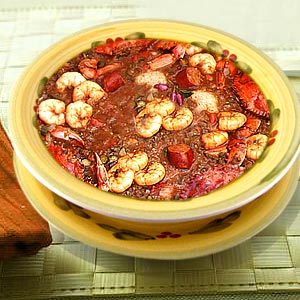 Gumbo can also be termed as the spicy Louisiana soup or stew. Gumbo recipe speaks volumes plus perfectly combines the rich cuisines of the provincial Indian, Spanish and African cultures.

Call it a soup or stew, gumbo derives its name from the word kigombo, a term used in Africa, kigombo means okra. Gumbo has its origins deep rooted to Louisiana though it is equally popular in the Southern parts of the United States and in the Gulf Coast of the United States. Gumbo can also be termed as the spicy Louisiana soup or stew. This soup or stew speaks volumes plus perfectly combines the rich cuisine of the provincial Indian, Spanish, and African cultures. Check out simple gumbo recipes for seafood gumbo, chicken gumbo and shrimp gumbo.

Gumbo is made using a thick stock, a thickener, meat and/or shell fish and vegetables like bell pepper, celery and onions. This soup is traditionally with rice. The rice served along with gumbo is cooked separately. Just before serving, gumbo is ladled over a heap of rice kept in a serving bowl. Gumbo is very popular during winter - ideal to beat the biting cold.

The stock or broth is prepared very rich and is prepared with whatever blends well with that particular variety of gumbo (chicken stock for chicken gumbo and seafood stock for seafood gumbo). Okra or roux is used as a thickener for this soup. Roux is often used as a thickening agent. Roux is prepared by heating up oil in a pan and roasting flour to it till it turns brown.

A traditional gumbo broth is made from either one or more kind of poultry, shellfish and smoked pork. Poultry chosen for preparing gumbo is usually chicken, duck or quail. For seafood gumbo, shellfish is the popular choice though freshwater crawfish, crabs and shrimps are also used to make gumbo. A vegetarian variety of gumbo is prepared during Lent where mashed greens are used instead of meat. Gumbo Z'herbes (with herbs) was a traditional dish was served on Good Friday containing at least seven herbs. Seven was considered lucky thus seven different types of greens like spinach, mustard leaves etc were used to prepare this dish.

Cut the chicken pieces to desired serving pieces and cook in salted water until tender. Fry the ham. Fry the onions until brown in the ham fat. Mix ham, chicken, cooked onions, and oyster juice, cover it with boiling chicken stock. Add chili pepper and the rest of the seasonings and cook for about two hours. Just before serving the soup, wet the file powder with a little soup and add it to the soup along with the oysters. Once file is added to the soup, the soup should no longer be simmered. Keep a heap of cooked rice in each of the serving dishes and ladle gumbo on the top.

Heat oil in a pot and add the flour and stir till brown roux is formed. Add onions, garlic, bell peppers, and celery and sauté till vegetables become tender. Add tomatoes and tomato puree and sauté for about 10 minutes. Add pepper and salt and simmer for another 10 minutes. Add okra and cook for another 10 minutes, add the stock. Bring it to a boil, reduce the heat and cook for another thirty minutes on reduced flame. Add the crab after breaking it into two. Cook the gumbo on very low heat. Add the shrimps just 10 minutes before serving.

Gumbo is usually made from chicken because chicken is available aplenty and is also less expensive when compared to seafood. Old chicken makes the best gumbo so use old chicken to get the traditional flavor in your gumbo. Chicken gumbo can either be served as an appetizer or as a meal by itself. While preparing chicken gumbo remember to cook the chicken just until it is done and be careful not to blacken it. Limitless variations can be introduced while preparing chicken gumbo. During olden days whole pieces of chicken was used to make gumbo along with the bones. Modern day's gumbo uses small pieces of boneless chicken and either dark meat or white meat is used.

Fry chicken and when done cover it with boiling water and simmer until it falls apart. Leave it on a plate to cool, take the broth in which the chicken was cooked and pour it into a soup pot. Add the chicken after either mincing or shredding it. Fry the onion with either the salt pork or bacon. Boil the tomatoes in water.

During summer add corn, cut and scrape the corn into the gumbo, it tastes fantastic.

In a medium pan cook the sausage till it turns brown, remove it from the pan and remove the fat from the sausages. In large pan heat oil over a high flame, brown the chicken pieces in them. Ensure the chicken is uniformly cooked on all sides. Heat oil, add flour and prepare the roux, and let the roux be dark brown in color this adds on to the flavor of the gumbo. When the roux is ready add the sausage, green onion tops, parsley, onion, green pepper and garlic. Cook on low heat until the vegetables are done.