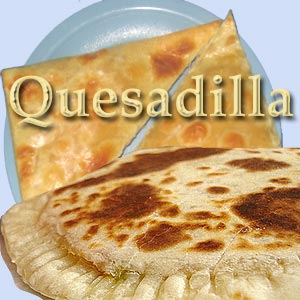 Cheese Quesadilla is simple to make, the tortilla is folded over the filling and both its sides are browned. Check out how to use a quesadilla maker and pick up some simple quesadilla recipes.

Quesadilla is made using a toasted tortilla (made from flour or corn meal) and queso (cheese). Quesadilla is a Spanish word meaning 'cheese tortilla', Queso in Spanish means cheese. The snack is prepared either using wheat flour or a corn meal tortilla; cheese is used as the filling.

Quesadilla is simple to make, the tortilla is folded over the filling and both its sides are browned. They are cut into wedges and served. The cheese filling can be replaced with tomatoes, chicken, beef, seafood, onions, turkey, olives and mushrooms, though this might not equate the authentic cheese flavor. Quesadilla is either grilled or fried and is served with sour cream and guacamole.

Originally quesadilla was made with masa (cornmeal dough) dough. In the traditional version of quesadilla, Chihuahua cheese is used. This cheese is a white and mild Mexican cheese, this cheese is also popular as queso menonita. Quesadilla varies in taste in the southern regions of Mexico. Oaxaca cheese (similar to the mozzarella cheese), potato and pork sausage (chorizo), mild to hot chilies, etc are used for fillings. Quesadillas are often served as an appetizer. Read up more on how to use quesadilla makers.

There are a variety of cheese that can be used to prepare quesadillas, few of the popular varieties are:

Pre-heat the pan. Apply sauce on the tortilla and spray the cheese. Fold over. Place the tortilla over the pan and cook on each side for about 3 minutes. Cut into wedges and serve

Cheese quesadilla with mangoes for kids

On a stove top, heat a skillet. Spread butter on one side of the tortilla. Place the non-buttered side of the tortilla on the skillet. Flip over, reduce heat and add the onions, mango slices. Spray cheese over this and wait until the cheese melts. Fold the tortilla and flip over to cook the other side. The tortilla should be browned evenly on both sides. Cut into wedges and serve

Cook the shrimp in boiling water for about 3 minutes. Rinse the cooked shrimp in cold water. In a mixing bowl blend the lime juice, zest, green onion, jalapeno, cilantro, cumin, pepper and salt. Add the shrimp to this mixture; allow it to stand for about 30 minutes.

Melt butter in a pan. In the pan, place a tortilla and rub it so that the butter coats around well. Heat the tortilla until air pockets are formed. Drain the excess liquid from the shrimp. Place some shrimp and the mixture over the tortilla. Spread cheese above this. Cook the quesadilla until golden brown on both sides

Sauté pepper, onion, and cilantro in butter. When the onions turn transparent, add the shrimps. Cook the shrimps until they turn pink. Keep aside. Heat the flour tortilla in a large pan. Place the shrimp mixture on the tortilla and spray both the cheeses on top. Just as the cheese begins to melt, fold and flip. Cook until the cheese melts completely. The tortilla should be browned evenly on both sides. Cut into wedges and serve

Mix sliced jalapeño, cilantro, lime juice, water, and olive oil using a blender. Blend until smooth. Season with salt and pepper. Put the chicken tenders in a shallow baking dish. Marinade with the prepared mix, it should be coated completely. Cover it and refrigerate for 4 hours. Preheat Grill.

Remove the chicken from marinade and grill it until cooked, for about 6 minutes. Coat the eggplant and onion with oil. Sprinkle little salt and pepper and grill for about 4 minutes. Keep turning in between. Wrap the tortillas in a foil and put it on the top rack of the grill as the other ingredients get cooked.

Remove from grill. Mix the cheese in a bowl. Place cheese on the tortilla. Place a slice of chicken, onion and eggplant each. Cover it with another tortilla. Put it on the grill and cook over low heat until the cheese melts. The tortillas should turn into nice golden brown. Wedge them and serve with sour cream.


Top of the Page: Cheese Quesadilla