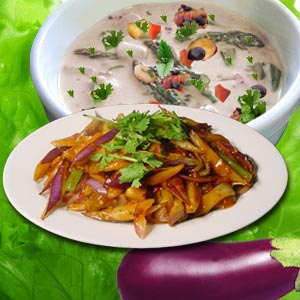 Eggplants are rich in fiber and minerals and vitamins. Being low in cholesterol and sodium, they are ideal for those on healthy diet or seeking weight loss. Find out ways to cook eggplant, be it baking, grilling or in casserole.

Eggplant is a popular 'fruit' that lends itself to preparing simple, creative, delicious savory dishes, as if it were a vegetable. Appetizers, salads, soups, main courses, casseroles and more, eggplant is a perfect choice.

Found aplenty in supermarkets, farmers markets and produce stores round the year, eggplant comes in a variety of colors and sizes - with dark shiny skin known in the US as Purple Globe, Black Beauty, Black Magic and Black Bell. Eggplant also comes in white, red and green colors. Popular varieties include Chinese, Italian, Sicilian, White, Baby, Indian, Japanese, African and Thai. The size can range from 2 to 4 inches wide and 5 to 9 inches long. The smaller varieties tend to have fewer seeds.

The skin of the eggplant should be shiny and free of blemishes. The fruit should bounce back into its original shape when pressed gently.

Depending on the recipe, the skin of the eggplant can be removed or retained. Although most of the skin on eggplant is edible, there are some varieties where the skin is not palatable. The skin can be removed before cooking with a vegetable peeler or after cooking, the flesh can be removed from the shell and the skin discarded.

The exteriors of the eggplant should be washed before cooking, preferably with warm water. The calyx on the top of the eggplant has to be cut off and also remove a small portion of the base. The eggplant can be halved or cut into a number of smaller pieces. Sprinkle coarse salt and place in a colander to drain, to reduce the moisture in the eggplant slices. The salting technique helps decrease the likelihood of moisture before cooking and also reduces the bitterness that may be present in some varieties.

Eggplant can be prepared in a variety of ways including steaming, baking, sautéing, roasting, grilling, stuffing and broiling. Eggplant pairs well with tomato, garlic and onions.

Eggplant is low in saturated fat, sodium and cholesterol. It is high in dietary fiber, potassium, manganese, vitamin C and K and Thiamin, Niacin, Vitamin B6, Pantothenic acid, magnesium, phosphorus and copper. The nutritional value and health benefits of eggplant make it an ideal choice for maintaining optimum health and weight loss.

Eggplant contains over eighty different nutrients and contains numerous vitamins and minerals. It also contains phytonutrients, antioxidants and free radicals that can protect from certain types of cancer. Eggplant contains thirteen phenolic compounds. These add to eggplant nutrition but also have a couple of negative effects on the eggplant as well. This lends the plant to have a bitter flavor and also to brown quickly after being cut open. Eggplant helps in reduction of cholesterol and improves heart health. It is also helpful in the treatment of rheumatoid arthritis.

Eggplant can be cooked using several methods such as frying, grilling, baking, stuffing and roasting. When cooking eggplant, ensure that it is cooked sufficiently to a creamy smooth texture.

Preheat grill and drizzle each eggplant slice with olive oil, salt and pepper and cumin, Repeat on the other side. To make this easier, one could combine all ingredients in a bowl and allow to marinate for about 5 minutes. Grill eggplant for 5 minutes.

Slice eggplant in half. Sprinkle salt over each half and let sit for at least 20 minutes and then rinse and gently pat dry. Preheat oven to 350 degrees. In a small bowl, whisk together 2 tablespoons of the oil and the hot sauce and spread over the eggplants. Bake for 10 minutes and then turn eggplants and bake for another 5 minutes. Broil for an additional minute per side. Eggplants should be browned and tended by now. In a small bowl, whisk together the remaining one tablespoon of oil with the remaining ingredients and gently brush this mixture over the broiled eggplants.

Preheat oven to 425 degrees with racks on top and bottom of the oven. On one rimmed baking sheet toss together tomatoes, carrots, garlic and 2 tablespoon of oil, 1 teaspoon salt and ¼ teaspoon pepper. Spread out on the baking sheet in a single layer with tomatoes cut sides down.

On another rimmed baking sheet, toss together eggplant, chickpeas and curry powder and remaining 2 tablespoon of oil, 1 teaspoon salt and ¼ teaspoon pepper. Spread out in a single layer on the baking sheet. Place both sheets in oven and roast until tender for about 45 minutes tossing the mixtures halfway through.

Using tongs, peel off and discard the tomato skins. Puree tomato mixture in a blender until smooth. Transfer the mixture to a large pot and stir in the eggplant mixture and thin with 3-4 cups of water. Bring to a simmer over medium heat. Season with salt and pepper. Serve sprinkled with cilantro and garnish with toasted bread if desired.

Cook rice. Now cut eggplant in half lengthwise and scoop out center from each half leaving a shell. Dice the eggplant meat and place eggplant shells cut side down in a large skillet with boiling salted water. Cover and steam for 3 minutes. Drain and reserve. Heat oil and cook diced eggplant, tomatoes, green pepper, onion and garlic until tender. Add cooked rice and seasoning and stir to combine. Stuff mixture into the eggplant shells and dot with butter. Bake in a preheated 350 degrees oven for about 30 minutes until the eggplant shells are tender.

Peel and slice eggplant in ¼ inch slices. Sprinkle with salt and pepper. Place eggplant slices on a lightly greased cookie sheet, brush lightly with oil, cover with foil and bake in a 400 degree oven for about 15 minutes. Remove from oven and set aside. Combine eggs, cheeses, basil and mix together until blended. Set aside.

Grease a 9 x 13 inch lasagna pan and layer tomato sauce, eggplant and cheese mixture in prepared casserole, starting and ending with tomato sauce. Sprinkle top with additional parmesan cheese. Bake at 375 degrees for about 45 minutes. The eggplant can be prepared the day before and refrigerated and the entire casserole can be assembled the next day and cooked in the evening.

Preheat oven to 375 degrees and in a large sauté pan add olive oil. Add the eggplant and cook halfway through. Add red pepper, celery and onion and cook for about 3 to 4 minutes. Add the basil leaves and remove from heat. Add parmesan, cream, bread crumbs and salt and pepper and toss to combine. Place skillet in the oven and cook until heated through about 20 minutes. Serve with grilled lamb chops.

Cut the eggplant in rounds thinly sliced, and lay on paper towels and slightly salt. Lay another paper towel on top and continue layering with eggplant rounds, salt and paper towel. Place a heavy pan on a cookie sheet on top of stack and let sit for at least ½ hour to 2 hours. This helps to make the eggplant softer and tastier. Wilt spinach and drain out water with a colander. Cook lasagna noodles until tender. Mix cottage cheese with spinach in a bowl and salt and pepper and season to taste.

In a casserole pan, spread a light layer of sauce. Add a layer of noodles, layer of eggplant, sauce, layer of cottage cheese, spinach mix, another layer of noodles, and repeat the process until pan is full or desired height is achieved. Top with remaining mozzarella cheese, tomato sauce, and cover evenly with thinly sliced peeled tomatoes. Sprinkle with parsley flakes. Bake at 350 degrees for about an hour until the eggplant is soft. Serve with salad.

Preheat oven to 350 degrees and spray a 2 ½ quart baking dish with cooking oil. Heat olive oil in a large skillet over medium heat and cook and stir the garlic, onion and eggplant with garlic until the vegetables have begun to soften. Stir in the zucchini, bell pepper, tomatoes and basil, parsley salt and black pepper and bring the mixture to a boil stirring frequently.

Reduce the heat to medium low and simmer until the vegetables are tender. Cook the frozen ravioli as directed on the package and drain. Spread the cooked ravioli in a layer into the bottom of the prepared baking dish and spoon the hot vegetables over the ravioli, Sprinkle with the cheese. Bake in the preheated oven until the casserole is bubbling and the cheese is melted in about 20 minutes.

Keep the eggplant immersed in a bowl of water until ready to make the curry to prevent discoloration. Drain when ready. Heat 4-5 teaspoon of oil in a non stick skillet. Add the turmeric powder and curry leaves and fry for a second. Add the onions, eggplant, and salt and stir well. Cover and cook on medium high heat for about 5 minutes stirring frequently until the vegetables are tender.

Remove the lid and stir fry on high heat until the pieces are lightly browned. Reduce the heat to medium high and add the red chilli powder along with 2 more teaspoon of oil and sauté until the raw flavor is gone and the eggplant and onions are well browned. Sprinkle chickpea flour and sauté for a minute more.


Top of the Page: Eggplant Casserole