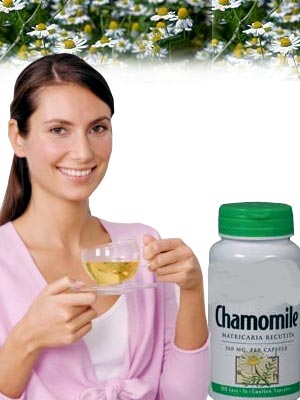 A simple and informative guide to using chamomile for its myriad benefits. Learn how to brew chamomile tea for it's curative properties.

From the time of the early Egyptians and Greeks, chamomile has been regarded as a sacred herb - one that was packed with curative and healing properties. Chamomile is enriched with soothing relaxing properties that work against stress, menstrual cramps and pains. Chamomile is available in oil, tincture, dried tea or capsule form. From digestive problems to blisters, headaches to irritable bowel syndrome, chamomile flowers can provide relief. Read on to find out the benefits of chamomile tea.

The chamomile herb and flower has been hailed since ancient times for its medicinal and curative properties. The word chamomile finds it's origin in the Green words - chamos (ground) and melos (apple). The gentle apple-like aroma of chamomile is used in beauty products. Lotions and oils infused with chamomile are used to reduce eczema itching and other skin inflammation. Chamomile preparations are used for treating sensitive young skin of infants suffering from skin conditions.

You can mix chamomile flowers with cream and create an infusion as a facial cleanser. Treat your tired eyes with a cool compress of chamomile tea. A tincture of chamomile flowers is used to treat summer diarrhea in children and the essential essence of the flowers can be use in poultices for curing inflammatory pain, congested neuralgia and swelling. Use chamomile lotions for relief from toothache and earaches.

Chamomile is widely used to relieve women from menstrual cramps. The antiseptic and muscle relaxant properties of chamomile promote relaxation and relieve stress. It can be of help to insomniacs. Use chamomile mouthwash for soothing mouth sores and gum disease. The many uses of chamomile are listed below:

Drinking chamomile tea before bedtime has been followed for centuries on account of its ability to calm the nervous system and soothe gastrointestinal disorders. It's mild flavor makes chamomile tea a favorite beverage with many. You can brew hot chamomile tea in a pot of boiling water for about 3 - 7 minutes. If you prefer to drink iced chamomile tea, strain the hot brew and top up with cold water. Garnish for choice. Tea made with Roman chamomile is stronger.

A tisane of chamomile is caffeine free and boasts of many benefits much like green tea. Ensure that you cover the pot in which you are brewing chamomile tea since the medicinal value of the flowers is lost on evaporation. Let the tea decoction stand for a few minutes before straining it. Add ginger to chamomile tea and you can seek relief from indigestion and gout and periodic headache.

Mild chamomile tea in large doses is sometimes given to those suffering from fever and sore throat. The usual dosage for an infusion is about three grams of the flower heads in one half cup of hot water, taken three to four times a day between meals.