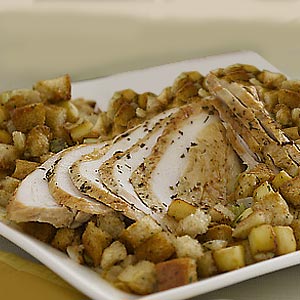 Preheat oven to 300 degrees. Arrange bread cubes in two 13x9 inch baking pans. Toast bread cubes at 300 degrees for 45 minutes stirring occasionally. Remove from oven and cool. In large mixing bowl, mix onion, seasoned pepper, oil, garlic salt, parsley flakes and sage. Toss bread cubes with seasoning so that the bread cubes are coated. Place in a large airtight container and refrigerate, use within 2 months. If you freeze the mix, you can use up to 6 months. This mix can be used in any recipe that uses stuffing mix as an ingredient.

Cube bread, arrange on cookie sheet and allow it to dry over night. Turn oven to 325 degree and allow the bread to brown. Transfer to paper bag and add all the seasonings. Spin the bag to coat the bread cubes with the seasoning mixture. Store in an airtight container on cooling.

Arrange bread crumbs on a cookie sheet and bake at 350 degrees for 8 to 10 minutes, allow it to brown evenly. Toss bread cubes with balance ingredients until the cubes are evenly coated. Store in an airtight container for 1 to 4 months or in the freezer for 1 year.

Preheat oven to 250 degrees. Arrange bread cubes in 2 rimmed baking sheets. Bake until bread is dry for about 1-1/2 hours. Transfer bread to large bowl. Sauté bacon in large skillet until crisp. Transfer bacon to paper towels. Discard all except 1 tablespoon of fat from skillet. Add butter to the skillet and melt over medium heat.

Add onion; sauté until soft. Add chives, tarragon, pepper, salt, and bacon to bowl with bread; toss well. Butter a 9x9x2-inch baking dish. Stir in chicken broth to bread mixture and toss to moisten. Transfer stuffing to the prepared dish. Cover stuffing with a foil and bake for 40 minutes. Uncover and bake until lightly browned on top, for about another 20 minutes.

Preheat oven to 325° F.Butter a baking dish. Dry corn bread for about 20 minutes in oven. Remove corn bread from oven and leave oven at 325° F. In a large, deep skillet, sauté bacon over moderately high heat for about 10 minutes.Add celery and onions and sauté, until vegetables soften. Add herbs and salt and pepper to taste and cook for a minute.

Bread stuffing with sausage and herbs

Preheat oven to 350 degree F. Arrange bread cubes in a single layer on a large baking sheet. Bake at 350 degrees for 5 to 7 minutes, until evenly toasted. Transfer toasted bread cubes to a large bowl. Cook the sausage and onions over medium heat, in a large skillet. Cook until onions get brown. Add the sage, celery, rosemary, and thyme; cook, for about 2 minutes. Pour sausage mixture over the bread and toss lightly.Add the dried cranberries, chopped apples, and parsley.Sprinkle the turkey stock and melted butter, and mix lightly. Stuffing is ready.

Cook sausage in a large skillet over medium heat until browned. Transfer the sausage to a large bowl and throw away the excess fat. Melt butter in the same skillet. Add onion and celery and cook over medium heat until soft and translucent. Stir in the dried herbs and pepper and cook for another minute. Transfer the mixture to the bowl with sausage. Add the apricots, parsley, pecans, and salt and mix well. Add the bread cubes. In a small bowl, beat the stock and eggs together. Pour the mixture over the bread cubes. Gently toss.