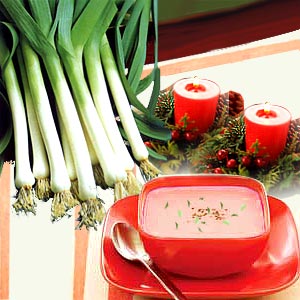 Leek is a member of the onion family and is less pungent when compared to garlic and onion. Try out this simple potato leek soup recipe for a tasty and nutritious appetizer.

Popular among chefs as the 'poor man's asparagus', leek is considered a treasure in the European and Mediterranean kitchen. Leek is a well-known garden vegetable and is abundantly found in many parts of Texas. Leek is a member of the onion family and is less pungent when compared to garlic and onion. It is sweeter and milder in flavor when compared to onions and garlic. Leeks enhance the flavor of any dish without altering the flavor of other ingredients that make the dish. Leeks are mainly used in soups.

Leeks can be consumed raw, cooked or can be added to a salad. Never overcook leeks, as they become very tough and lose their original taste. Leeks have to be washed thoroughly before use. A lot of grit and sand gets accumulated in the outer layers. Leeks grow into long round stems measuring 2 inches in diameter and 6 to 10 inches in length. Though they belong to the onion family they do not grow into bulbs as onions and garlic do.

While picking up leeks, ensure that they are firm and straight with dark green leaves and white necks. Do not go in for leeks that are yellow or wilted. Do not wash or trim fresh leeks before storing them in the refrigerator. Wrap them loosely in plastic bags and refrigerate them as this will help retain the moisture in the leeks. Alternatively you can blanch and freeze them. Leeks can be stored in the freezer for about three months.

Mix all ingredients and cook for about eight to ten hours on low fire. Add evaporated milk and cheese during the last thirty minutes of cooking. Adjust the seasonings as per taste. Mash with a potato masher to get a thicker and smoother consistency, add milk or broth if required.