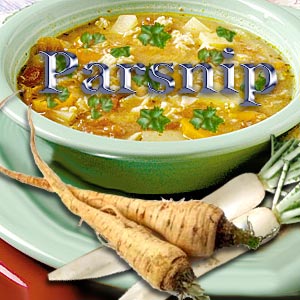 A traditional American vegetable, parsnip is used extensively by the Europeans too. Learn how to incorporate parsnips into your recipes.

Parsnip is a root vegetable that belongs to the family of carrots. Parsnips look a lot like carrots but are much paler in color and stronger in flavor. A traditional American vegetable, parsnip is used extensively by the Europeans too. Parsnip derived its name from the French word pastinaca, the nip in the word pointing out that parsnips are like turnips. Parsnips can be eaten raw or cooked. Learn how to incorporate parsnips into your recipes. Take note of a simple parsnip soup recipe.

Parsnips were cultivated and consumed in Eurasia since ancient times and were used very frequently in all dishes until potatoes replaced them. In medieval Europe sugar was an uncommon and expensive commodity and parsnips were used as they were both starchy and sweet. With the growing popularity of sugar and potatoes in the 18th century, parsnips slowly started to lose their significance. In America, parsnips were brought in by the early European settlers. They used parsnips as a sweetener until the 19th century after which the sweet beets replaced the parsnips as sweeteners.

Parsnips are winter vegetables because the complete flavor for parsnip is developed only when it is exposed to close to freezing temperatures for about 2 - 4 weeks during fall and early winter. This exposure converts the starch in the root of the parsnip into sugar thus giving it a sweet, strong and special taste. Parsnips have a sweet nutty flavor. This flavor is fully developed only if the parsnips are exposed to the winter properly.

Fresh parsnips have a buttery-soft texture when cooked whereas old parsnips become very fibrous and taste bitter when cooked. Over-cooked parsnips get sticky and turn into a paste. If stored in a clean and cool place parsnips can stay fresh for weeks together. Parsnips must be cleaned just like carrots by scrubbing them well. Leave muddy parsnips as they are till you decide to cook them. The mud protects the parsnips.

Small parsnips are sweeter than the large ones and they are less woody too. Pick a parsnip that is firm and that is less damaged at the root. Parsnip and its leaves are known to cause skin allergy to some. Parsnip is a staple winter vegetable used in soups, stews etc. Parsnips can be boiled, used in soups, stews and casseroles, or roasted. Roasted parsnip is an important dish in Christmas dinners and in traditional Sunday roasts too.

Parsnips are rich in vitamins and minerals. They have high potassium contents of nearly 660 mg per 100 g. Parsnips have good fiber content and make for excellent dietary fiber. 100 g of parsnip contains about 55 calories of energy. They also provide moderate amounts of Vitamins A, B and C.

Heat a large pan without oil and add cumin, fenugreek and coriander seeds. Roast for about 2 minutes. Wait until they pop, remove from heat and crush them using a pestle and mortar or in a grinder. Heat oil in a pan and sauté onion, garlic, chili and ginger until they become soft. Now add the ground seeds and sauté for another 2 minutes. Scrub or peel the parsnips and cut them into ½ inch cubes. Add it to the pan and stir well until the mixture coats well on the parsnips. Cover and cook for 5 minutes.

Add tomatoes, chick peas, and stir well, cover and cook on low fire for about 20 minutes. Cook until the parsnips are tender. Remove from heat and sprinkle the coriander leaves.

Melt butter in a heavy bottom saucepan to cook onion, garlic, carrot, celery, gingerroot and the thyme over low heat. Stir continuously while cooking until the onions get soft. Add parsnips and the broth and bring the liquid to a boil. Cover and cook the mixture for about 15 minutes, until the vegetables are tender. Puree the soup using a blender and pour it in the pan. Add the nutmeg and add enough water to get the desired consistency for the soup. Add salt and pepper.