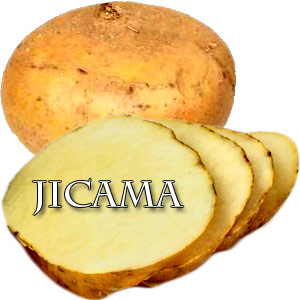 Jicama is a nutritional storehouse of vitamins, fiber and trace minerals. Look up simple jicama recipes, tasty yet low in calories.

Jicama, a crunchy root vegetable is a native of Mexico but is slowly finding a spot in many kitchens of America and Asia. Also known as yam bean or Mexican turnip or Mexican potato, jicama has an apple-like texture and can easily replace water chestnuts in a recipe.

Jicama is a healthy alternative to potatoes in taste, but with much lesser starch and plenty of fiber. So, diabetic patients who miss their favorite potato can binge on Jicama without guilt. This humble vegetable has enormous health benefits, yet it was not so widely known and consumed. But awareness of the nutritional benefits of jicama has increased its usage.

Jicama is a bulky vegetable and normally weighs around two to five pounds. Choose jicamas that are firm and round. Don't pick up one that is soft or bruised. This vegetable has crisp juicy flesh inside and is covered with brown thick and coarse peel. Jicama needs to be peeled thoroughly before using it. You may even slice off the peel with knife as the thick skin is harder to peel with peeler. Ensure that the outer peel is discarded as it can be poisonous.

Once peeled it can be diced, grated or cut into cubes or sticks to suit the preparation. It has a sweet nutty flavor and it is equally delicious whether eaten raw or cooked. Jicama is highly adaptable and adapts to the flavor of the dish it is cooked in effortlessly.

Apart from its wonderful culinary uses, Jicama is a nutritional power house containing large amounts of vitamin A, Band C. It is also a rich source of phosphorus and calcium. Jicama is quite low in calories and hence is a weight watchers delight. One cup or 120 grams of Jicama has only about 49 calories. It also fills you up faster as it contains generous amounts of fiber.

Jicama contains 6.4 g of fiber per one cup, which is almost 1/4th of the daily recommended dosage of fiber per day. It is nearly fat free and has low sodium and cholesterol. A cup of Jicama provides 40 percent of the daily value of vitamin C and is also a good source of folic acid. It is rich in inulin, a zero-calorie inert carbohydrate that works well with diabetics. Jicama is also a rich source of copper, manganese, iron and magnesium.

Nutrients in Jicama per 120 grams

Jicama is highly versatile and can be used in various preparations. It tastes great when eaten raw, it can also be stir fried, baked, boiled or steamed to suit the recipe. One good thing about jicama is that it never turns brown no matter how long it's kept out and also does not get soggy when prepared. Add it to fruit salad or a vegetable salad.

It goes very well with bean salad, particularly with black bean salad. One cup of cubed jicama added to green salad with a dash of lemon juice, chili powder and salt is a wonderful way to start your meal. Replace cabbage with shredded jicama in coleslaw recipe to give it an interesting dimension. It will enhance the crunch factor.

Here is one more interesting way to prepare Jicama. Take two cups of shredded Jicama, 2 crushed garlic cloves, 1/4th cup of red pepper, 1/2 a spoon of paprika, 2 tsp of olive oil and salt. Heat olive oil in a wok and once heated add garlic followed by all other ingredients one after the other. Stir fry the mixture for 5 to 8 minutes serve.

Try adding diced Jicama in your favorite salsa and you will be delighted. Combine 2 tsp of fresh cilantro, 1 tsp of lime juice, salt(as per taste) 2tsp of chopped jalapenos, 1/2 tsp of chili powder, one tsp of red sauce and 1 cup of diced Roma tomato with 2 cups peeled and chopped Jicama. Experiment with fruits like mango or diced apple pieces or some oranges. Jicama sits pretty on a veggie tray along with other vegetables like carrots, cauliflower, broccoli, cilantro and French beans.

Forget potato French fries. Replace it with the sticks of Jicama. Cut the Jicama into long strips; toss them in olive oil and your preferred spices; mix of paprika, onion and garlic powder and salt works wonderfully for Jicama fries. Then bake them in a preheated oven for 10 minutes or until they turn golden brown.