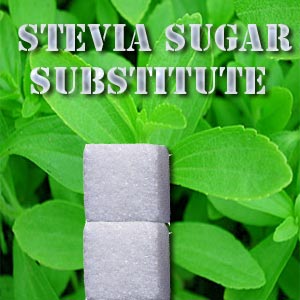 There is incredible sweetness found in stevia due to the glycosides in its leaves and 10% stevioside in the plant. Stevia rates a 0 on the glycemic index. It contains no carbohydrates or sugars.

Stevia is an extremely sweet, remarkable non caloric herb; native of Paraguay and Brazil. This shrub belongs to the Chrysanthemum sunflower family. There is incredible sweetness found in Stevia due to the glycosides in its leaves and 10% stevioside in the plant. It is truly unique among the nearly 300 species of Stevia plants.

Stevia was first used by the natural scientist Antonio Bertoni, who recorded its usage among native tribes in the year 1887. Stevia is not only a sweetener but flavor enhancer. After the Dietary Supplement Health and Education Act, Stevia is sold legally in the US as a dietary supplement.

Stevia is used as a prepackaged replacement for sugar and artificial sweeteners. It is used in various food products, including Japanese sugar free versions of Wrigley's gums, and in food yogurts and in diet Coke. Japanese style pickles, dried sea foods, fish meat products, vegetables and sea foods boiled in soy sauce use Stevia. It is also used in confectioneries and a host of other products.

Stevia is completely non-toxic and an all-natural herbal product used for centuries by native Indians in Paraguay. Refined sugar, as such, is devoid of nutritional benefits. And Stevia is much sweeter than sugar; with none of the unhealthy drawbacks of sugar.

While the crude Stevia leaves are reported to be 10 to 15 times sweeter than sugar, refined extract of Stevia is incredibly sweet and needs to be diluted for proper usage. But both of these products leave a slight bitter after taste, which is characteristic of licorice.

Stevia can replace artificial sweeteners in the diet, and it is significantly, non-caloric.

Stevia as a flavored sweetener is available to greatly change the flavor of any drink. It is extremely safe to use flavored Stevia although it tastes so good. Flavors such as vanilla Crème liquid Stevia, Stevia mango flavored liquid Stevia and sweet leaf chocolate liquid Stevia are available.

A liquid extract can be made from the whole Stevia or from the green herbal Stevia powder. Usually a measured portion of Stevia leaves or herbal powder is combined with pure grain alcohol, such as Scotch. This mixture is left to sit for about a day and then the liquid is filtered from the leaves or powder residue and diluted to taste using pure water.

The alcohol content can be suitably reduced by slowly heating, and not boiling the extract and allowing the alcohol to evaporate off. A pure water extract can also be similarly prepared, but this may not extract as much of the sweet glycosides as will the alcohol. The liquid extract can either be cooked down or concentrated into syrup.

If you are trying to replace Stevia measure for measure with sugar in a regular recipe, you will surely over-sweeten the dish. In fact, one teaspoon of powdered Stevia extract is equivalent to a cup of sugar.

Baking with Stevia can get tricky as Stevia does not caramelize like sugar. So there is no browning here. Sugar keeps the baked good moist and so you have to make other adjustments when Stevia is used for the missing sugar.

And using Stevia for cooking completely sugar-free recipes is tough as there is no sugar being used. You need to find something to replace the bulk that the sugar provides. One can use granulated sugar alcohol called erythroblast to replace sugar and this works quite well. Stevia is then added to increase the overall sweetness of the recipe.

It is essential to look at the Stevia conversion chart/guidelines before cooking. For most Stevia recipes, a simple conversion is enough to replace the sugar by the correct amount of the Stevia sweetener.

Stevia rates a 0 on the glycemic index. It contains no carbohydrates or sugars to illicit any effect.

However it should be remembered that most of the products that contain Stevia indicate a small amount of glycemic index. Usually very little of pure unadulterated stevia is needed to sweeten food and drinks as stevia is many times sweeter than sugar.

Another stevia blend is marketed as Truvia, with is yet another sweetener. This is not purely chemical but developed by an agribusiness interest. Although truvia is similar to stevia, it is not the same. Some feel that it tastes better, but truvia is not allowed on the original protocol. This is because truvia has other things added to it. Truvia contains erythritol, rebiana and other natural flavors.

On a comparison, both stevia and truvia are sweeteners; truvia is made up of Stevia and erythritol while stevia is made up of extracts of the stevia leaves and steviosides. While truvia does not exhibit any effect on blood glucose levels and blood pressure, stevia does exhibit side effects in some. Truvia is sweet, but Stevia aside from being sweet, has a licorice flavor.

Stevia was banned in the US as a sweetener. It was only in 1995 that it was allowed as a 'dietary supplement'. In late 2008, highly purified Stevia extract, Rebaudioside A, became available as a food additive. Now it is available in multi trade names including Only sweet, PureVia, Reb-A, Rebiana, Sweet leaf and Truvia.

Guideline for cooking with Stevia

Liquid Stevia or packet forms are available for smaller amounts, which need to be added to a recipe. In case powdered stevia is being used, it is better to check it for food additives such as maltodextrin which may contain carbohydrates and calories.

While stevia improves the taste of strong flavored food types, it can dull the effects when used in combination with other delicately flavored ingredients. For instance, in a crème brulee, you need to add a small amount of sugar to get a crusty topping as stevia does not caramelize whereas, stevia can be used in a custard with no problem.

In canned fruit preserves like applesauce and purees, stevia has a shorter shelf life and therefore it has to be frozen. In syrups, a gelling agent called pectin has to be added for effect.

Other than some exceptions, baking and cooking with Stevia is pretty simple. Stevia powder is soluble in water and pH neutral, remains stable in temperatures up to 200 C.

While using Stevia powder, it is important to use pure stevia extract product and not the one with fillers as available in the market today; fillers such as maltodextrin. The product should contain the label 'pure stevia extract'. It has no aftertaste, which most of the other products do.

Preheat the oven to 350 degrees and lightly oil an 8 inch square pan with coconut oil or butter. Melt chocolate squares, butter and coconut oil over low heat in a heavy bottom saucepan. Add erythritol and stevia powder and stir until erythritol is dissolved. Let the mixture cool to room temperature. Now add vanilla and beat for about 30 seconds using a hand or mixer.

Beat eggs one at a time. In a separate bowl mix the flour, baking soda, and salt together. Stir the dry ingredients until blended. Add the walnuts. Spoon the batter into the oiled pan and bake for about 30 minutes. In case you do not like the flavor or the texture, you can add erythritol instead of Sucanat.