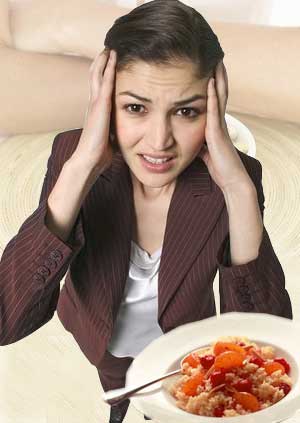 Food poisoning can surface as mild vomiting and diarrhea or take on severe proportions with dehydration and renal complications. Find out about different causes of food poisoning.

Have you been affected by bouts of abdominal cramps, vomiting or dizziness after consuming food? These could be symptoms of food poisoning that results from contamination of the food by virus, bacteria or toxins. Though most instances of food poisoning clear up in a few days, sometimes it can take an alarming turn. Find out more about salmonella food poisoning and e coli food poisoning.

Bacteria multiply rapidly in the presence of moisture, food and warmth. Typically bacteria multiply in temperatures between 5oC and 63oC. Food poisoning is caused by consumption of food that has been contaminated by bacteria, bacterial toxins, virus or natural poisons.


Botulism (Clostridium botulinum) is yet another form of food poisoning. Signs of this form of food poisoning begin with blurred vision and lead to subsequent weakness of the entire nervous system. This form of infection is transmitted by honey, sausages and seafood. Toxic agents such as wild mushrooms can cause symptoms of food poisoning such as nausea and vomiting. Sometimes it can even lead to shaking and hallucinations. Food poisoning caused by pesticides passes toxins through unwashed fruits and vegetables. Typical symptoms range from weakness and cramps to increased saliva to shaking of legs and arms.


Listeria is a form of food poisoning that usually causes no symptoms. But it can be harmful to pregnant women and elderly persons. The toxin is found in shellfish, pate, processed meats, and soft cheese. Pregnant women should avoid eating these foods because listeria can be fatal for the fetus.

Young children, elderly persons and pregnant women must take special care when they notice signs of food poisoning. Treatment for food poisoning is needed if symptoms persist and lead to severe vomiting, dehydration, and blood in stools or severe abdominal cramps. Patients on medication, particularly for heart conditions and diabetes should seek prompt and early medical advice. Young children and babies are very susceptible to rapid and dangerous dehydration. Treatment for food poisoning in such cases must not be delayed.

Salmonella bacteria are usually found in poultry, eggs, unprocessed milk and meat. This type of bacteria causes infection to the stomach and intestines. Salmonella is an important cause of food poisoning. Insufficient cooking and contamination of cooked foods can lead to salmonella food poisoning. The bacteria are destroyed at cooking temperatures over 150o F.

Food poisoning during pregnancy can be avoided by carefully monitoring your diet. Do not consume ham, turkey and salami unless they are steaming hot. Refrigerated pates and meat spreads and pastes can harbor Listeria bacteria. Ensure that the milk is pasteurized before consumption. Hard cheeses are safer than soft cheeses like Feta, Roquefort, Camembert and Brie.

E Coli is usually found in the gut of humans and animals. E Coli O157 is found in raw and undercooked meat, raw vegetables as well as milk that has not been pasteurized. Typical symptoms of e coli food poisoning develop within a couple of days. E coli food poisoning cases are noticed with eating undercooked and contaminated ground beef as well as consuming milk and daily products from unpasteurised milk.

Mild fever, severe diarrhea and abdominal cramps are symptoms of e coli food poisoning. A small percentage of persons suffering from this form of food poisoning develop hemolytic uremic syndrome. This is a condition where the red blood cells are destroyed and the kidneys fail.