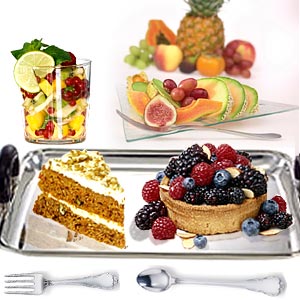 Don’t deny yourself the dessert routine. Instead opt for healthy dessert recipes that tickle your taste buds yet don’t burden you with unwanted calories.

Awareness about mounting calories and unhealthy weight is making people further conscious and cautious about what they eat. Little wonder that most people are counting calories whenever they eat! It’s not often that one can say no to a sinfully tasty dessert but it leaves you with a feeling of guilt once you have partaken of it. Too much of sugar, carbohydrates and saturated fat in the desserts can cause harm to your body if consumed a lot.

People having a sweet tooth tend to desert their diet plans for the sake of tempting desserts. Eating healthy does not mean quitting eating your favorite desserts. Eat what you want but choose a healthier option is the criteria behind eating right. You can always eat desserts if you prepare them in a healthy manner. There are scores of dessert recipes that are low in fat but rich in taste. Go in for healthy dessert recipes.

Cheesecake in a jiffy

Spread each of the crackers with 1tbsp part-skim ricotta cheese and 2tsp jam. Ready to serve as a nutritious dessert option.

Preheat oven to 375 degrees. Ready an 8” square pan with cooking spray and flour. Arrange the apples in this pan, keep aside. Mix nutmeg, flour, cinnamon, and brown sugar. Crush the margarine using a pastry blender. Add the walnuts and stir. Spread this mixture evenly over the apples. Bake for 30 minutes until the apples are done and the top layer gets crispy.

Keep a bowl in the freezer to chill. In a mixing bowl, add soy milk, yoghurt, honey and canola oil and whisk well. Pour this mixture into an ice cream maker and prepare the ice cream. Once the ice cream is firm, transfer it to the already chilled bowl and top with nuts. Serve immediately or store in freezer until you serve. This is an easy to prepare dessert. You can make ice cream using vanilla soy milk and chilled yoghurt.

Heat a broiler pan or a gas grill and coat it with cooking spray. For the marinade, in a small mixing bowl, mix olive oil, honey, lime juice, cinnamon and cloves. Blend them well. Keep aside. Chop off the crown and the base of the pineapple. Pare off the skin of the pineapple using a knife; leave alone the small brown eyes. Remove all the eyes of the pineapple.

Pour the coffee into a bowl and add the gelatin; let it stand for few minutes so that it softens. In a medium sized mixing bowl, blend cocoa, corn syrup, whole egg, and ½ cup milk into a smooth paste. In a heavy saucepan, add the remaining milk and allow it to steam. Slowly and steadily whip the hot milk into the egg mixture. Cook this over low heat until the mixture thickens slightly, for about five minutes. Remove the pan from heat and add the gelatin, let the gelatin dissolve. Add chocolate and stir until it melts and blends well. Add the vanilla and stir thoroughly. Transfer to a big bowl and allow it to cool to room temperature.