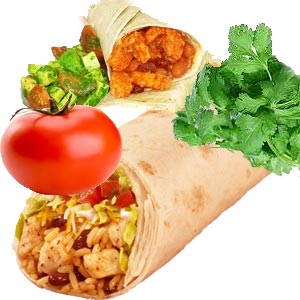 Use large flour tortillas, spread delectable ingredients over them, fold them and you have a burrito ready. Pick up easy burrito recipes, for breakfast or for a snack on the go.

Burrito is a Mexican classic containing a delectable mix of healthy delights. Though they originated in Mexico, Burritos have now become an integral part of American cuisine. A burrito is a flour tortilla filled with beef, chicken, or pork. Traditionally, burritos were filled with beef and other seasonings, but black beans, pinto beans, rice, eggs and salsa are also popularly used. Burritos are highly adaptable; as ingredients for filling can be as varied as your imagination allows.

Burritos are somewhat similar to tacos but they make use of large tortillas, sufficient enough to hold considerable amount of filling. Burritos transform the humble bean, rice or beef mixture from routine fare to an interesting and delicious meal in itself. Burritos not only taste good but they are convenient food to pack and carry. Burritos are healthier than fast food. Leftovers can be cleverly used in a burrito and you have a snack in a jiffy. Burritos freeze well - so they are ideal for those who are starved on time.

Burritos have amusing tales associated with the origin of the word. In Spanish, the word burrito means 'little donkey'. The folded burritos resembled donkey's ears thereby earning the name. There is one more version to how it gained its name as burrito. During the Mexican Revolution in the 1900's, burritos were sold on the streets and donkeys were used to carry them around. Food was stuffed in a flour tortilla to keep it warm. People came from other places to taste the food of the burrito, and thus the dish came to be known as burrito.

Filling: Heat oil in a pan and sauté the onions for a minute. Add ground beef, salt, chili powder, cumin powder, pepper to taste and stir fry for 2 minutes. Stir in diced tomatoes and salsa and fry it until the beef is browned. Remove from the heat and mix the shredded cheese.

Place the tortillas in a microwave and warm them. Spread the tortillas on a flat surface and spoon the filling in the center of the tortilla. Garnish with finely chopped cilantro. Now fold the burrito. Fold in the top and bottom edges to the center and also overlap the sides in a similar manner to make a neat cover.

Sauté garlic in butter and on turning golden, add black beans and flavoring powders. Let it simmer for about 5 minutes. You can top each tortilla with cooked rice, beans mixture, salsa and sour cream. You can choose to add a dollop of guacamole if you so desire.

Heat olive oil in a pan and add chopped bell peppers, onions, tomatoes and sauté lightly. Add corn to the vegetables and sauté a bit more.

Take a mixing bowl and whisk the eggs along with the milk and add to the pan. Add enough milk to make for a light mixture. Season with salt and pepper. Warm the tortillas in a microwave. Place the tortillas on a flat surface. Add 2-3 tablespoons of the egg mixture to the tortilla. Sprinkle shredded cheese. Then wrap up the tortilla into a burrito shape and serve

Heat the oil in a skillet over a medium high heat. Add chilies and sauté until they become soft. Add chicken, crushed garlic, cumin powder, chili powder salt and keep stirring until chicken is well coated with dry spices. Cook the chicken until it becomes tender.

Mix in the tomato sauce and cook for another 3 to 4 minutes. Heat tortillas in a microwave for few seconds on high. Place the tortilla on a large plate and put the chicken mixture in the center and top it with salsa and grated cheese (optional). Fold into burritos and enjoy.

How to fold the burritos

Burritos lose their charm once they start leaking. They need to be wrapped tightly to keep the filling intact. Follow the steps given below to fold a burrito efficiently.