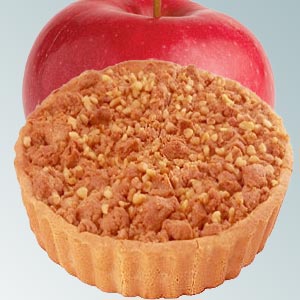 Sign off your meal with a healthy yet delicious dessert, the apple crisp. Look up simple recipes for warm apple crisp, cinnamon apple crisp and apple crisp toppings.

Sign off your meal with a healthy yet delicious dessert, the apple crisp. This dish could be as effective as an apple in keeping doctors away. Apple crisp, as it is known in the United States is a dish of baked apples with a crispy crust topping.

A baked dessert recipe, apple crisp is called so because of the crisp top layer. Apple crisp is also known as apple crumble as the top layer is crumbly. Apple crisp is very popular during the fall and winter months as these months mark the harvesting season for apples.

Preheat oven to 375 degrees. Spray cooking spray in a flat casserole dish or large pie plate and set aside. Peel and slice apples and arrange it in a heaped fashion in a casserole. Sprinkle a pinch of salt a bit of nutmeg and cinnamon. Pour water and lemon juice into the bottom of the casserole over the apples or along sides. With a pastry blender, combine butter or margarine with flour, oat cereal and brown sugar.

The topping should be mixed until crumbly. Stir in the walnuts. Arrange the topping over the top of apples. Spray the cooking spray over the topping, this encourages browning. Bake at 375 degrees until golden brown and apples are bubbling. Allow to cool and serve

Peel the center and chop the apples. Toss in a bowl with lemon juice. Mix brown sugar, cinnamon, and nutmeg in a separate bowl. Add to the apples and toss. Mix flour, sugar and oats in another bowl. Cut the butter into the flour until the mixture is crumbly.

Stir in the chopped nuts. Butter a 9-inch square baking dish and sprinkle the flour mixture. Bake at 375 F for 35 to 40 minutes. The apples have to get tender and the topping crisp. Serve with vanilla ice-cream

Place the apples in the baking dish and pour the cherries over the apple mixture. Toss lightly to blend. Sprinkle the oat topping over the fruit mixture. Bake until apples are tender. Serve warm

Preheat the oven to 375 degrees F. Lightly butter 6 (6-ounce) ramekins. In a medium-sized bowl, beat the brown sugar, flour, oats, pecans, and salt. Rub in the butter until it is in even, pea-size pieces. Peel, core and coarsely chop the apples. Divide evenly among the ramekins. Spread the crisp topping evenly over the fruit in each of the ramekins.

Transfer the ramekins to a baking sheet and cook until the fruit bubbles around the sides, the top should get golden. Preheat a broiler. Place the crisps about 4 inches from the broiler and cook until golden brown, for about 30 seconds. Allow it to cool for about 15 minutes before serving. Serve warm with whipped cream.

Mix together and sprinkle over apples and bake

Mix sugar, butter, and flour together, until crumbly. Add cinnamon, salt, and pecan pieces. Do not over mix. Store in refrigerator. Use as topping for apple crisps

Mix the sugar, brown sugar, flour, salt, oatmeal, slivered almonds and butter in a bowl. The mixture should reach the consistency of soft dough. Use a stand mixer until the butter is in the size of peas.

Melt butter and drizzle over the apples. Bake at 350 F until the apples are tender. The top should get brown. Serve hot or cold along with ice cream or whipped cream

Bake about 40 minutes or until topping is golden brown and fruit is tender. Serve with a scoop of low fat ice cream or fat free frozen yogurt.