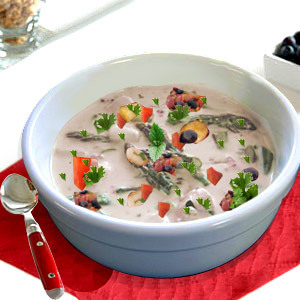 Having originated as a poor man's dish, chowder has grown to be the favorite food of scores of people all over the world. Clam chowders, corn chowders and seafood chowders are especially popular in the U.S.

Chowder is a thick soup enriched with salted pork layer of fat commonly called as fatback. The soup is thickened by adding flour; traditional chowder usually contains crushed saltine crackers or ship biscuits and milk along with other ingredients. The soup has fish or shellfish, clams and vegetables such as onions, potatoes, in either milk or tomato base.

Originally chowders were made with seafood but of the late any kind of thick and rich soup that has chunks of ingredients in it is termed as chowder. The most commonly used ingredients to prepare chowder are potatoes, onions, cream or milk, clams and flour (to thicken the soup). Having originated as a poor man's dish, chowder has grown to be the favorite food of scores of people all over the world. Clam chowders are especially popular in the U.S.

The word chowder originated from the Latin word claderia, meaning a place for warming things. Chowder has a French connection too, in French chaudiere means a caldron or a three-legged pot in which fishermen prepared their stew with fresh seafood. Chowder is a common word in New England, related to Newfoundland where the fishermen community at the end of the day threw their share of the day's catch into a big pot.

Along with seafood the fishermen threw food ingredients like vegetables, slat pork, crackers, and milk into the pot and brewed it into a thick hot soup or stew. The most popular varieties of chowder are clam, New England Chowder (made with cream or milk), and corn chowder.

Steam clams in a kettle retaining the balance water (to use as stock) after the clams are cooked. Cook potatoes separately and keep aside. In a large pot sauté onion, paprika, celery and bell pepper using butter till vegetables get tender. Add flour and stir the mixture continuously, taking care not to burn it. Add clam stock, clam base, clam and potato. Allow to simmer for 15 minutes. Add tomatoes and simmer for about 10 minutes. Serve steaming bowls of clam chowder.

Corn chowders were initially prepared by the farming community during and immediately after the yearly fall harvest of sweet corn. Currently corn is available throughout the year thus corn chowder can be prepared anytime. Corn chowder is generally prepared using potatoes, bacon, onions, milk, and corn. It has a thick and creamy consistency; it is a rich soup and is prepared like any other chowder except for the addition of corn. Along with corn vegetables like potatoes, onions, celery are added, spices and herbs are added too. If you wish to give the corn chowder a chunky and juicy flavor add smoked chicken to it.

Cook pork and onions for about 5 minutes, taking care not to burn them. Strain the fat into a sauce pan and cook the potatoes by adding enough water.
Add corn and milk and bring it to a boil. Season with salt and pepper. Serve hot.

For people living in cold climates, New England clam chowder is a warm option. New England clam chowder has a creamy base and is pale white in color. Traditionally this chowder is made from either a milk or cream base and has chunks of clam and vegetables like potatoes, celery and onions. Spices and herbs are added to enhance the flavor of the soup. At times sherry and clam juice is also added in this chowder to enhance the taste of the chowder.

Wash clams thoroughly, clean and steam. Add chopped salt pork in a stockpot and cook in minimum heat, add chopped bacon too. Cook until done. Remove from heat and cool for about 15 minutes and add olive oil and 1 tbsp butter. Sauté celery and sliced onion along with the pork and bacon. Add the garlic when the onions are turning brown and sauté. Add clam liquor or water, bay leaves and celery seeds. Also add green onions or leeks and simmer for 15 minutes. Add potatoes and simmer on reduced heat. Add flour to thicken the chowder and cook for a minimum of 30 minutes.

Once potatoes are cooked, add corn, add the clams and the balance clam liquor. For a richer consistency, add milk and cream. Simmer for another 15 minutes and add the balance butter, minced parsley, salt and pepper and chopped green celery leaves. Remove the bay leaves before serving. Serve in warmed bowls, sprinkle paprika, and garnish with fresh parsley. Serve milk crackers along with the chowder.

Fish chowder was consumed by people even before they started consuming clam chowder. Clam chowder was served only during a particular season (when clams were available in plenty). When clams were not found it was usually fish that found its place in chowders. Fishermen brought in their own contribution of fish for the day and cooked it in a common chowder builder.

Ship's biscuits and salt pork added to the fish chowder gave it a different taste when compared to other fish soups. The main ingredient of fish chowder was either fish or shell fish. Fish chowder is very popular and is well liked by people from all cross sections.

This is Ireland's most popular and traditional dish. Chowder prepared using seafood is very popular all over the world. Vegetables such as potatoes, celery, onions can also be added to the chowder. Any kind of seafood can be used to make this chowder, commonly used seafood are shrimps, mussels, cod, clams etc.

Heat a soup pot over medium heat and add butter and oil to it. Once oil and butter heat up add onions, carrots and celery. Season with pepper and old bay seasoning. Add garlic and bay leaves, cook until vegetables become soft. Stir continuously while adding in clam juice, tomato juice and tomatoes and bring to a boil. Add potatoes, parsley, and corn and cook till potatoes are done well.

Season with old bay seasoning. Remove the bay leaves. Add seafood to the chowder and cook, keep the pot covered while the sea food is getting cooked. The mussel shells have to open after they are cooked; remove closed mussels from the chowder. Serve hot.