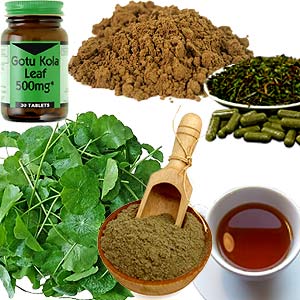 Gotu Kola or Centellar benefits range from collagen promotion to anti-bacterial and anti-inflammatory properties. The effects of Gotu Kola on calming the mind and increasing oxygen to the brain make it a popular herb to promote memory and intelligence.

Its fan shaped leaves are said to resemble the structure of a human brain. Since the leaves are about the size of an old British Penny, Gotu Kola is also called as the Indian Pennywort, marsh penny and water pennywort. Gotu Kola has three main chemical constituents:

The Centella plant is also a source of Vitamin K, Magnesium, Calcium and Sodium. Centella is used as a leafy green in Sri Lankan Cuisine, where it is called Gotu Kola. In Sinhalese, Gotu means conical shape and Kola stands for leaf. The entire plant when cooked or used as a medicine is said to promote memory and intelligence. It is a good strengthening tonic for adrenals, and purifies blood when treating skin impurities. Gotu Kola is considered as food for brain, due to its ability in combating stress, depression and nervous breakdown.

Clinical studies reveal that Gotu Kola improves concentration and creates a calming effect on individuals prone to anxiety. A preliminary result in a clinical trial with mentally challenged children, conducted in 1992 has shown to increase the scores on intelligence test. Gotu Kola is also found to increase the brain's oxygen supply by protecting the blood vessels that supply oxygen to the brain.

Brahmi, another famous Indian herbal adaptogen is said to possess similar properties as Gotu Kola. They both are often used interchangeably. Nevertheless, a recent scientific study has revealed that these two adaptogenic herbs belong to two different species.

Since times immemorial, Indian Ayurvedic treatment has been using Gotu Kola as a rejuvenating herb. The herb is said to develop the crown chakra (the energy center at the top of the head), and to balance the right and left hemispheres of the brain.

Scientific studies indicate that Gotu Kola regulates collagen production and minimizes the scar formation on skin. It is also found effective to promote healing from episiotomy, and to relieve the red welts of psoriasis. Centella also acts on the skin to maintain a youthful appearance. Scientifically, Gotu Kola is used as an

While tested in lab with rats that live in stressful conditions, Gotu Kola is found to benefit the adrenals by preventing their enlargement while also limiting excessive Corticosteroid production. In a laboratory setting, the herb is also found effective in destroying cultured tumor cells.

Gotu Kola is available in liposome tablets or tinctures. It is also included in many commercial topical creams that promote wound healing, collagen production, or reduce the appearance of cellulite.

Gotu Kola is also available in all supermarkets as dried or powdered herbal tea. It is believed that one can get the benefits of Gotu Kola by drinking the herbal tea made from the herb. Traditional Chinese medicine argues that consuming Gotu Kola tea would be the ideal method of consumption. Following is the general recipe for preparing Gotu Herbal tea.

Boil 8 ounces of boiling water. Add 1 teaspoon of Gotu Kola tea, steep it for 5-10 minutes, strain and serve the tea hot. It is said that two cups of Gotu Kola tea each day can help relieve anxiety. However, remember as with any herb, it takes up to three weeks to see the results.

Gotu Kola side Effects and Warnings

Women who are pregnant or nursing women should avoid Gotu kola. Gotu Kola may lead to miscarriage in pregnant women if taken internally or externally. Avoid Gotu Kola if you are taking tranquilizers or blood pressure lowering medications since the herb may have a narcotic effect.