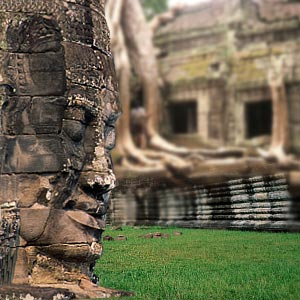 The charm of Cambodia is not restricted to artistic sculptures, ancient temples, sandy beaches, wildlife watching or just enjoying its sights and sounds. Travel to Cambodia to experience its diversity.

Cambodia has all the endorsement for a fulfilling travel and leisure destination. The largest religious monument in the World, the Angkor Wat Temple is in Cambodia. Besides the Angkor Wat temple, all ancient temples in Cambodia reflect its cultural opulence. The National Museum is stocked with the world’s foremost masterpieces. Cambodia is endowed with several pristine beaches that reveal Cambodia’s real inner beauty.

Adventure tourism in Cambodia is in its nascent stage. Yet, exploring the jungles of Cambodia and a speedboat journey through the swathes of jungle make for a thrilling experience. The ravages caused by decades of war and political strife is fast cemented by rapid changes aimed at attracting tourists around the world to explore and experience its wealth of beauties, the incredible landscapes, vibrant culture and rich heritage. Travel to Cambodia to experience this and more!

Preahreacheanacha Kampuchea is the national name of Cambodia. Situated on the Indochinese peninsula, Cambodia shares borders with Thailand and Laos on the north and Vietnam on the east and south. Rivers, lakes and forests, animals and bird life co-exist in a total area of about 181,040 square kilometers.

The land area amounts to 176,520 km and water area including inland water bodies such as lakes, reservoirs and rivers constitute 4,520 square kilometers. The coastline is around 443 kilometers. The medium depth tropical sea rich in aquatic creatures, uninhabited islands, white sand in virgin beaches along with immense cultural and historical attractions attract tourists around the world all through the year.

The Khmer or Angkor Civilization came into existence during 802 to 1431 A.D. For Centuries, Cambodia flourished and remained rich and powerful. Even today the remnants remind tourists of the most prolific period that existed during the Khmer Empire. Hundreds of monuments were built in a matter of 40 years. The Angkor Wat temple built in the early the 12th century and Bayon are world-renowned examples of the Khmer civilization. Exemplary pieces of Angkor civilization are products of display in Phenom Penh and Siem Reap.

After repeated wars, the Chams brought an end to the Angkor Civilization. This was followed by repeated invasions, the Chams from Champa, Thais and the Vietnamese. In 1840-41, the Vietnamese and the Thais struggled to gain power and control over Cambodia. The French and the Japanese too have fought for power in Cambodia. The tussle for power continued for years. And finally, the Paris Peace Accords in 1991 paved way for establishing a constitutional monarch. After a brief guerilla war by the Khmer Rouge, in 1996, peace and stability returned to Cambodia.

After decades of agitation and confusion, today Cambodia is rapidly making efforts to revive its economy. In the recovering economy, particular importance is given to the tourism Sector. Specific plans are designed and implemented to attract tourists around the world. Tourist friendly reforms and facilities such as access to International airport, new pubs, cafes, restaurants, hotels and guest rooms are fast developing primarily aimed towards making Cambodia more pleasant and relaxed. Next to Tourism, the clothing sector is the fastest growing industry in Cambodia.

Angkor Wat: The Angkor Wat is a temple in southwest Cambodia. The UNESCO has recognized Angkor Wat Temple as a world heritage site. The temples of Angkor were built during the Khmer Civilization between 802 and 1220 AD. The complex was constructed over a period of 30 years in order to serve both as a sepulcher for King Suryavarman II as well as in recognition of his status as an incarnation of the Hindu god Vishnu.

Spread over 40 miles around the village of Siem Reap, the complex houses 100 stone temples. The Angkor Wat temple is surrounded by a moat, which measures 570 feet wide and about 4 miles long. Besides the temples, the complex included other buildings such as palaces, public buildings and houses, which were originally built of wood. Today, there is hardly any ruin to justify their presence.


The interior hallway of Angkor Wat is significantly famous for having the longest running bas-relief, a method of sculpting. The word relief signifies a form of sculpture wherein the final object almost looks like a painting as it employs the technique of drawing and sculpture. An art form that dates back to nearly 20,000 years back, the sculptured objects project from a supporting background, which is usually a plane surface and results in sculptures that are both realistic and emotionally expressive. The galleries contain large-scale scenes depicting the history and mythologies of the Angkor World.

Every morning, enthusiastic tourist throng Angkor Wat complex mainly to view the spectacular sunrise. As the sun rises slowly, an outline of the five towers of the central sanctuary appears on the wall. The exuberance of the intricate stone carvings offers a spectacular artistic fulfillment.

Royal Palace: The Royal Palace in Phnom Penh was built over a century ago. The Royal Palace was built to serve as the official residence of the royals, the King of Cambodia, his family and to entertain other foreign dignitaries. It is also a venue for all official ceremonies pertaining to the court. Today, the present King Norodom Sihamoni lives in the Royal Palace.

A miniature Angor Wat temple adorns the entrance to Royal Palace. Other places of tourist interests in the Royal Palace include the Throne Hall, ‘Silver Pagoda’ overlooking the riverfront park, Chan Chaya Pavilion and the monuments nearby. The attractions in Silver Pagoda are the silver tiles on the floor, and the Emerald Buddha.

The chan chaya pavilion is the front gate to the Royal Palace. Earlier classical Cambodian dance performances were held here. Today it is used to hold many public events. You may require a minimum of two hours to cover the entire area. The Royal Palace is closed to public viewing on National Holidays.

National Museum: Located near the Royal Palace, the National Museum was built in 1917. Great deal of archives was destroyed during the incessant turmoil in Cambodia. Yet, the priceless collections available today include the foremost collection of ancient Khmer archeological, religious and artistic artifacts dating back to the 6th century up to the 14th century.

The collection at the National Museum is close to 5,000 pieces. It includes magnificent sandstone and sculptures removed from ancient Buddhist or Hindu temples. The display includes old bronze and pottery objects from the Funan and Chenla period.

Tuol Genocide Museum: Not a pleasant place to visit by the softhearted, the Tuol Sleng Museum is a testament to the crimes of the Khmer Rouge. It was once used as a detention and torture-afflicting center. The Tuol Sleng genocide Museum is also in Phnom Penh. Initially a high school, the site was converted in 1975 into a notorious security prison by the Khmer Rouge regime.

The classrooms were converted into cells. The prisoners, usually members and soldiers accused of betraying the Khmer party, were chained to and tortured before burning them alive. The merciless Rouge leader would then order to take pictures of each victim. The photographs are on display in each room.

Wat Phnom: Wat Phnom or the Hill temple is located atop a hill and lies in the center of Phnom Penh. The locals frequent Wat Phnom who come and pray for good fortunes. The hill and a small temple were initially built around 1373. Restoration work is often carried out here and the current temple was rebuilt in 1926. Climbing up to the top of the hill, tourists can enjoy great views of the city around.

Amongst these, popular beaches frequented by the tourists are Victoria Beach, Independence Beach, Hawaii Beach and Serendipity/Ochheal Teal Beach. The Sihanoukville International Airport facilitates easy movement to and from Sihanoukvile. It is either car or bus travel from or to the airport.

Some beaches are rocky and some are smooth sandy beaches. Swimming, sunning, snorkeling, fishing, scuba diving or trips to islands are the varied holiday activities tourists like to experience. Standing on the shores and hilltops that surround the beaches, one can take picturesque view of the small islands. Getting around the town is very convenient. Tourists usually prefer to take swift walks. Motorcycle taxi’s and tuk tuks are other options.

The charm of Cambodia is not restricted artistic sculptures, ancient temples, sandy beaches, wildlife watching or just enjoying its sights and sounds. Vacation or trip to Cambodia is incomplete without visiting the large choice of entertainment venues, especially around Phnom Penh and picking souvenirs, or tasting authentic Cambodian food.

Some bars and casinos in some parts of Cambodia are open even during day time. Nightlife in Cambodia starts around 10.30p.m. Live entertainment by jazz pianists and vocalists, music bands, discos, bars, cinema, Cambodia offers varieties to match many different tourist preferences.

Royal Air Cambodge, Vietnam Airline, Thai Airways, Bangkok Airways, silk air and Lao Aviation connect most of the major cities in Cambodia with other countries. There are direct flights to the capital of Phnom Penh from Bangkok, Hanoi, Hochiminh City, Hong Kong, Kuahlupur and Singapore. Options to use internal air travel to many different parts of Cambodia such as Siem Reap, Battambang, Rattanakiri and Mondulkiri helps to save time and makes travel comfortable.