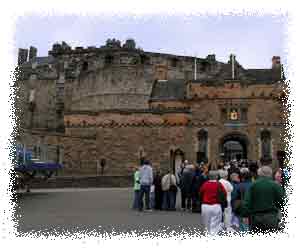 Scotland is not only famous for the heavenly brew of Scotch alone. This informative guide to a weekend break in Edinburgh gives you the low down on budget accommodation, cheap flights and the tourist haunts.

Edinburgh - the capital of Scotland sits on a series of volcanoes. For those looking for a weekend break in Edinburgh, this Scottish city with its fifteenth century buildings, ancient churches and monumental Victorian masterpieces will not disappoint you. You can fly down to Edinburgh from most airports in England and Europe.

Edinburgh is connected by high-speed inter-city trains along Britain's East Coast main line. International trains leave from Edinburgh Train Station making it an ideal weekend break. The public transportation throughout Edinburgh is inexpensive and convenient. Edinburgh is not only about tartan and bagpipes. A weekend break in Edinburgh is just what a golf enthusiast will be looking for, what with some of the world's finest links and parkland courses.

You can spend a leisurely weekend in Edinburgh pursuing mountain biking or walking through the city's streets. The cafes and pubs are open till the wee hours of the morning and the restaurants offer the most cosmopolitan ambience and cuisine. Steeply sloping streets, rolling hills, mysterious castles, ruined abbeys - Scottish holidays are made of these! What is a weekend break in Edinburgh without savoring some of the finest malts and whiskeys? There is no dearth of concerts and live music for the jazz aficionados.

A tourist map of Edinburgh shows the city as divided into three distinct sections - New Town, Old Town and the outskirts. Find the city nestled between the Firth of Forth and the Pentland Hills. If you are traveling to other locations in Scotland, it would be best to carry along a Scotland County map that contains Edinburgh map too. Any tourist wanting to explore the Old Town and New Town of Edinburgh would do well to arm himself with a street map of Edinburgh. Alternatively, you can download an Edinburgh street map from a tourist web site. With online street maps of Edinburgh, you can peruse the detailed image of the city layout and also zoom in and out of certain locations.

Bed and Breakfast in Edinburgh

Edinburgh is the premier tourist destination in Scotland and offers a wide variety of bed and breakfast and guesthouse accommodations to suit all tastes. Many of these accommodations are located in the West End and Tollcross, Grassmarket and Marchmont or the City center. The conservative sectors of Newington and Minto Street district offer many a bed and breakfast accommodation. These establishments offer you continental or full-breakfast. Don't forget to book your accommodation well in advance, especially during the festival season.

Two train services operate from Edinburgh namely Great North Eastern Railway (GNER) and Virgin trains. The Great North Eastern Railway offers services between Glasgow and London. Several stations are located along the route including all the major cities, as well as smaller cities and towns. Virgin Trains offers train services throughout the UK mainland to over 130 stations with Cross-Country trains and West Coast trains. Dozens of major cities are included on the train routes, as well as several smaller cities and towns.

With its grandiose castle overlooking a mix of Victorian and Georgian architecture alongside its famous festivals, Edinburgh is surely a popular destination for a vacation. You can find cheap flights to Edinburgh offered by different agencies and airways. But Edinburgh has limited direct air connections and most of the flights to Edinburgh are internal UK flights with a handful of operations to Europe. You can reach Edinburgh by flight from Britain and rest of the Europe. Cheap flights from London to Edinburgh start from £61 upwards. But most of these cheap flights are available only on selected dates. Flight operators like British Airways and BMI from Heathrow and also Easyjet, offer flights at low budget fares. Ryanair flights from Edinburgh are known for their cheap rates. But Ryanair flies only to Dublin from Edinburgh.

Though the city has a mild climate, it experiences extremely sunny days during the summer months from May to September. However, Edinburgh weather is subject to sudden changes. You can plan your travel to Edinburgh during Spring. Enjoy the mild climate of Edinburgh then. The long winters in Edinburgh can put off the weak-hearted tourist. The temperatures tend to dip below ero during the coldest days. December, January and February are perhaps the wettest months in Edinburgh. Northeast winds sweep across the North Sea during winter and make the Edinburgh weather rather cold and dry.

Edinburgh Castle - Seated on the core of an extinct volcano, Edinburgh Castle is one of the magnificent tourist attractions of Scotland. It attracts millions of visitors every year with its stunning view of the countryside. The Castle offers a splendid panoramic view of the city and the topography of the countryside. One of the oldest buildings in Edinburgh, St. Margaret's Chapel, built in 1076, is found inside the Edinburgh castle. The Castle Esplanade is the venue of the world-famous Edinburgh Military Tattoo that stretches over a three-week period in August each year. Don't forget to look into the Witches' well before you leave the esplanade.

St. Giles Cathedral: St. Giles Cathedral in Edinburgh is also called the 'High Kirk of Edinburgh' and is a Presbyterian place of worship. The Cathedral was officially consecrated by the Bishop of St. Andrews in 1243. It was named after St. Giles, a saint popular throughout France, in support of the Auld Alliance of Scotland and France against England. After the Reformation, John Knox became St. Giles' first minister. It is believed that there was a church on the site of the cathedral. The Church that once stood on this site had been destroyed by a great fire in 1385.

Royal Museum of Scotland: In the heart of Edinburgh and close to the Royal Mile, you can find two famous museums of Scotland. One among them is the Royal Museum of Scotland built in 1861 in the style of an Italian palace. Designed by Captain Francis Fowke of the Royal Engineers, this Victorian building has slim, elegant cast iron pillars and a glass roof. The museum houses a collection of items ranging from Classical Greek sculptures to stuffed elephants, from whale skeletons to Native North American totem poles. The Royal Museum of Scotland displays the communal drinking cup (Bute Mazer) as well as the jewelry, coins and medals that once belonged to Mary Queen of Scots.

The Old Town in Edinburgh offers exciting shopping opportunities. Pick up bric-a-brac and jewelry and antiques at the various shops that dot the Royal Mile. Princess Street would be the starting point of any shopping expedition in Edinburgh. The Princess Street is the right place to pick up Scottish crystal, tartans and woolens. You can find Debenhams, Frasers and Marks and Spencer here. Jenners is something of an institution in Scotland that has the privilege of catering to the British Royal Family.

Walk up the east end of Princess Street to Waverley Market. George Street is the shopping haunt for those seeking expensive goods. Pick up antiques and mementos at Thistle Street, Broughton Street, Victoria Street and Causewayside. The Gyle Shopping center in Edinburgh occupies pride of place in western Edinburgh. Cameron Toll is situated close to the City Centre and is a premium shopping mall offering a range of retailers - fashion, gifts, beauty and more. Nightlife in Edinburgh is fun, with pubs and nightclubs on most street corners.

Edinburgh has relaxed licensing hours. Most bars in Edinburgh are open till 1 pm and a few even go up to 3 am. Edinburgh nightlife is buzzing with activity, with nearly 700 pubs in the city. With a huge student population, it is little wonder that the nightlife is lively. George Street is a haunt with the smart set of Edinburgh and Leith has seen some trendy nightspots in the city. Grassmarket and High Street continue to be the favorites with the student population. The Royal Mile is packed on weekends with young music-loving crowds.


Top of the Page: Weekend Break in Scotland
Popularity Index: 100,976