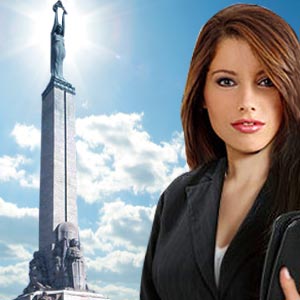 Latvia, North Europe's hidden treasure, is a small country located on the Baltic Sea between Estonia and Lithuania. In terms of tourist destinations, Latvia provides a plethora of choices. Latvia is best known for massive medieval buildings, astonishing churches, magnificent museums, and blessed with rich scenic beauty, nature parks and sandy beaches. Unlike its other tourist counterparts, Latvia is one of the few places in the world that is untouched by man and still retains original flavor gifted by nature.

Latvia was occupied and ruled by Soviet Union for a long time. It secured its independence from Russia in 1991. Since then it has joined the UN (1991), NATO (2004) and the EU (2004). Latvian is the official language of the place; Russian, English and German are widely spoken though.

Riga, the capital of Latvia is a hub of political, economic and cultural activities and is home to more than one thirds of Latvian population. This exotic city is rich in history and culture, and flaunts some of the best Art Nouveau architecture of Europe. Situated at the entrance of the Daugava River, Riga is the largest city of the Baltic States.

Riga has a wealth of great architectural buildings representing the period from year1201 and hence was included in the world heritage list by UNESCO. Riga throws wide variety of surprises and contrasts that it was once referred to by Napoleon as a 'suburb of London' due to its diversity. Riga still retains the architecture of wooden buildings without succumbing to the modern construction

Dome Cathedral: Built in 1212, Dome cathedral showcases a perfect combination of Romanesque, Gothic, Renaissance, Baroque and Classical style of architecture. The organ present here with nearly 7000 pipes, is recognized as one of the worlds's well known musical instruments.

Riga Castle of 13th century was originally built as a residence for the head of the Livonian Order, currently being used as office and home of the Latvian president. It also houses very popular Latvian Museum of Foreign Art and the Rainis Museum of Literature and Art History. This large yellow building captures the attention of locals and visitors alike.

Open Air Ethnographic Museum on the outskirts of Riga offers an insight into the traditional way of Latvian life with charming farmhouses, fishing villages, windmills and other historic buildings.

Central market of old Riga, a huge market with plenty of squares is an absolute shopper's delight. You can buy anything from fresh fruits, cheeses, and whole sheep carcasses, to appliances, clothing and CDs without straining your wallet too much.

The freedom monument at the center of Riga is designed and built by a well-known Latvian architect Karlis Zale to symbolize independent Latvia. The statue of Liberty sculpted here holds three stars - representing the historical areas in Latvia: Kurzeme, Vidzeme, Latgale

House of the Blackheads, a gothic styled building of 14th century with a dramatic height of 28m (92ft) above the square is a sight not to be missed. It was originally built to serve as headquarters to a group of local merchants called the Blackheads.

Riga is also a proud owner of some of the world renowned churches like St Jacob's Church, Aleksandra Nevska Baznica church and Grebenscikova church.

A visit to Riga is incomplete if you do not step inside the opera house of Riga. Operas and ballets are integral part of Latvian culture and the festivals celebrated here attract tourists from all over the world. Riga is best viewed from Skyline Bar, the 26th- floor at the Revel Hotel Latvia which offers epic 360° views over Riga.

Jurmala in Latvia means 'seaside' and true to its name, this place stretches on the 32 km. long white sand beach wrapped between the Gulf of Riga and the Lielupe River. Away from the hustle bustle of typical city atmosphere, Jurmala welcomes you with lovely beaches, wonderful resorts and spas providing mud treatment.

The beaches here are proud to fly blue flags signifying the quality of water. The shallow coastal waters are child-friendly and the beach is equipped with playgrounds, small benches, football fields and volleyball courts. Enjoy rowing, sailing and water skiing that take place on the river Lielupe.

Sigulda offers best of both the worlds with medieval castles, monuments and scenic landscapes with beautiful rivers taking turns and twists amidst sandy caves. Visit Sigulda in any season; it has something to charm you. Opt for downhill skiing in winters or boating if you happen to visit in summers.

A trip to Sigulda Castle, Turaida Castle and The Gutmanis Cave is sure to leave you mesmerized with the rich experience. Sigulda is known for the colors of its trees in autumn and it is best viewed in Gauja National Park which attracts tourists in huge numbers.

Kuldiga, a beautiful provincial town in western Latvia is only 150 km away from Riga. It is one of the well preserved towns of Latvia retaining its wooden architecture. The main tourist spots in Kuldi-ga are fascinating Ventas rumba, a 249-meter wide water fall and the brick arch bridge, an architectural monument which provides an excellent view of the waterfall.

It is the second largest city of Latvia. At Daugavpils you feel closer to nature with spacious streets and greenery all around. It is a tourist's dream destination offering the best of 19th century architecture, Daugavpils fortress and spectacular church ensemble Jaunbu-ve. The Daugavpils also takes pride in its Musical and Drama Theatre located in the city center

The city of Bauska is another of the major attractions of Latvia. Bauska is known for the Rundale Palace Museum, better known as the Rundales Pils.

If you are in a mood to have fun, Ce-sis is the place to land in. It captures you with its rich cultural life and innumerable recreational activities. Hiking, bike tours along winding roads and horseback tours of Ce-sis can be highly exciting.

This Roman Catholic shrine is a pilgrimage destination of international significance. It has breath taking interiors made with ten stone altars, cross vaults, arches and columns. . Every year in the middle of August, thousands of pilgrims from different countries come to Aglona for a religious celebration

Latvians are great foodies and they believe in eating substantial and filling meals due to the suitable climate and demanding outdoor life. A typical Latvian menu consists of rye bread, porridge, vegetables (particularly root vegetables), pork, chicken, fish, wild game and dairy products. Latvians are traditional people; recipes served on special occasions are symbolic and carry certain meaning behind them.

Circular grey pies served during Christmas represent the circle of life and round, yellow caraway cheeses are made during midsummer celebrations representing the sun and fertility. Latvia offers some of the best beer varieties and each place specializes in particular breweries.

Latvia enjoys temperate maritime climate with pleasant summers accompanied by high levels of humidity and precipitation. Winters can get severe and snowfall is common during these months. May to September (spring and summer) is the best time to visit, with daytime temperatures averaging 16°C. July and August is the peak tourist season. Rainfall is distributed throughout the year with the heaviest rainfall in August.

Riga, Liepaja and Ventspils are the main seaports of Latvia and these ports are well connected with the rest of the Baltic Sea countries. Tallink DFDS Tor Line (between Riga and Germany) is one of the important transport services available in Latvia. There are also few ferries connecting Ventspils with Germany and Sweden.