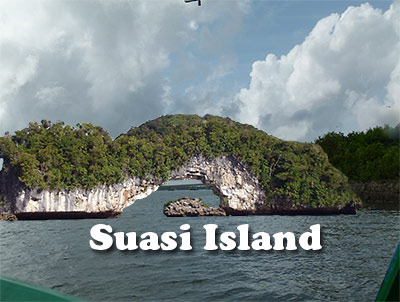 Lake Titicaca sits like a giant blue mirror flanked by snow-capped peaks and verdant greenery. Scenic islands such as Uros, Taquile and Suasi can transport you into a tranquil world of communion with nature.

You will find Lake Titicaca on the border of Bolivia and Peru near Copacabana. Located at an altitude of about 12500 feet above sea level, it is the world's highest navigable lake. The Lake holds pride of place in Incan mythology as it was from here that the creator God Viracoca rose and created early man and the sun, moon and stars. In fact, an ancient temple has been found submerged in the lake.

Lake Titicaca sits like a giant blue mirror flanked by snow-capped peaks and verdant greenery. Around the lake, you will find the Parihuana - the bird whose colors inspired the colors of Peru's flag.

Located on the north eastern part of Lake Titicaca, Suasi Island or Isla Suasi is a luxurious retreat into the lap of nature. You can reach Suasi Island by boat or the road skirting Lake Titicaca. For speedboats, you can board from the pier in Puno. En route the 3 hour trip, it stops at the Uros Islands and Isla Taquile. The road journey is scenic and winds through about 167 km.

Spread over about 40 hectares, the Island is home to special flora and fauna that is typical to the highland plateau. This private solar-powered island offers peace and solitude in well-appointed hotel rooms. Local materials such as stone, adobe and totora reed are used to build this resort. The rustic appeal of the eco-lodge in Suasi Island is a big draw with those seeking a serene sojourn; amidst the lap of nature. It offers a vantage spot on a sheltered hill. Take in the pristine blue expanse of Lake Titicaca.

The dÃ©cor complements the environs and allows visitors a glimpse into Andean cuisine made with organic food grown on the Island. You can go for nature walks and treks. Take guided visits around the Lake and learn more about the region, culture and topography.

You can canoe or sail on the lake. Itapilluni Hill is the highest spot on Suasi Island. Visit the island between May and October for pleasant temperatures.

Isla Tequila or Tequila Island has remained untouched by modernity. It is barely 1 km wide and about 6-7 km long. The Tranquilness are the local inhabitants who are well known for their traditional weaves. The colorful Peruvian handicrafts are much appreciated. They speak Quenching language. Don't miss the pre-Inca and Inca ruins and Inca stone terracing. Inca and Spanish customs and influences are still clearly noticed. The people live on a collective model (Alumna community) and are largely involved in agrarian work. The treks will take you down interesting and picturesque trails. You might chance upon some wild vicuna, similar to llamas.

Burgos Floating Islands or Isles Filtrates is a group of man-made floating islands created with tot ora reeds. Tot ora looks much like cat tail and grows freely in the lake. The inhabitants are called knot-sauna or people of the lake. They are considered the first ethnic communities to inhabit the Andean area.

The Island of the Sun

Isle de la Sol is the largest island around Lake Titicaca. This island is associated with magnetic energy as it was considered the fountainhead of the Earth and the source of the Inca Empire. It is home to the revered Puma Rock; where the Sun is said to have emerged according to Incan belief. El Racquet or Sacred Rock appears like a half dome sitting at the center of the Island. Incan pilgrims still visit this revered spot and offer coca leaves. It is considered their most holy place.

About 21 km long and 8 km wide, the Island of the Sun is inhabited by Tamara Capeskins. You can check out the museum at Charlatan, the island town. The other settlements are Tympani and Challis. Various artifacts and exhibits from ancient times throw light on the Incan civilization. You can visit the Incan site of Chicana and ruins of Pilot Kai na. Into-Walt is a throwback to the cultural milieu of pre-Inca agriculture and flora and fauna of the region. It also houses the Titicaca Reed Shipbuilders Display Center, Kao Underground Museum and the Man co Cap ac Lookout. You can enjoy a ride on a traditional boat vessel. A small trek away from Charlatan takes you to the ruins of Asphalt and Sanctuaries.

The town of Pun is characterized by constructions of the Andean architecture. Tourists must visit the Church of Saint Dominic in Chutist, one of the oldest in the region. The burial towers of Illustrating culpa are lined up near the lake shore. You can find archaeological artifacts of the Andean region in the Mu seo Municipal Carlos Dr eyer and the Mu seo de Carte Popular de Pun. It offers a glimpse into the artistic and cultural ethos of the people. Tourists can head to Lima Street to shop and eat. Stop at Le Cathedral on Plaza de Armas.

Copacabana and Puno are the important towns in the Lake Titicaca region. There are flights to Puno from domestic airports at Lima, Arequipa and Cusco. The airport is about 28 miles north of Puno town. Trains, bus and car journeys are more economical and very scenic. Puno weather is rather dry and cold year round. Beware of altitude sickness. Try coca-leaf tea to reduce the symptoms of nausea. Don't forget to pack along sunscreen.