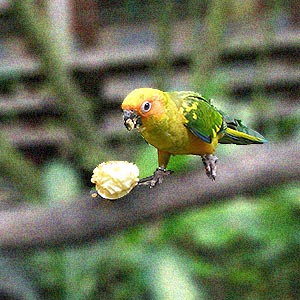 Nightlife lovers, sun seekers, culture seekers, beach seekers, trekkers and climbers, adventurers, wildlife lovers, foodies - Borneo is one travel destination that is sure to enthrall them all! Also, a popular family friendly weekend getaway destination and a romantic retreat, Borneo Island is regarded as tropical paradise on earth.

Before heading to Borneo Island learn more about its history and geography, Borneo weather, the attractions, wildlife, jungle safaris, etc and maximize your experience. Though shopping may not top tourist's interests, a visit to picturesque shopping mall or even the south Kalimantan floating market may almost allure everyone to pick traditional handicrafts and cultural souvenirs for their dear ones.

Shallow seas separate Borneo Island from the Malay Peninsula and from the adjacent islands of Sumatra and Java. Borneo is surrounded by South China Sea in the north, the Sulu Sea in the North East, the Celebes Sea and Makassar Straits in the East and the Java Sea in the South. Borneo's coast is a low, largely marshy belt with large areas of mangrove swamp.

The interior of Borneo is predominantly mountainous. Borneo is the world's third highest island; Mount Kinabalu in Sabah, Malaysia is 13,340 ft (4,095 m) above sea level. Mount Kinabalu is the island's highest peak.

Understanding Borneo weather is important in planning Borneo tour. Borneo weather is a major attraction with tourists looking for tropical weather holiday destination. Borneo lies 440km north of the Equator and has a tropically hot and humid climate throughout the year, especially in the lowland regions. Temperatures climb to low thirties. The average is about 80 degree Fahrenheit (27 degree Celsius). Showers to sunshine or vice versa, a typical tropical happening is very common in Borneo Island. Tourists who prefer cool retreat prefer the mountainous areas.

Tropical showers can be expected any time. As a result the Island receives rainfall throughout the year. The specific months regarded as rainy season is November to February. Compared to tropical showers, rainfall is heavier during these months.

Not a history lesson but knowing intended holiday destination's history will only help visitors to relate and appreciate the sights and sounds of the place. Borneo is rich with natural resources. Gold, camphor, tortoise shells, hornbill ivory, rhinoceros horn, crane crest, beeswax, dragon's blood, rattan, edible bird's nests and various spices were among the most exotic treasures in Borneo which explains why the Indians named Borneo as Suvarnabhumi (the land of gold) and also Karpuravdvipa (Camphor Island). Trading in goods with other countries continued for centuries.

Over a period of time, the Portuguese, Spanish, Dutch and the English have set their foot and left imprints in Borneo Island. The history of Borneo is largely influenced by their respective culture, religion, traditions and practices. There is also strong evidence of Chinese and Indian civilizations having existed in Borneo.

There is so much to see and experience while touring Borneo Island. Tourist interest and vacation duration are key elements in determining choice of Borneo eco tours. Popular categories include wildlife, adventure, nature, food, culture based tours and travels. Look at samples of Borneo tours.

Jungle tour: To appreciate the wonderful diversity of plant and wildlife and spot Orangutans, go off the beaten track and explore Borneo's remote jungles. These are amongst the oldest undistributed areas of rainforest in the world. Some of the best and most spectacular areas of rainforest are part of the National Parks in Borneo Island. The wholesome experience includes rafting down a river, cycling, trekking through rainforest, camping in remote villages and scaling the mountains.

Eco tours: A true eco tour is one where the tourists engage in responsible nature-friendly travel to natural areas which conserves the environment and improves the welfare of the local people. A walk through rainforests in Borneo Island that provide shelter for a myriad rare wildlife species is an example. There are many such destinations in Borneo Island. In Sukau, a village situated along the lower reaches of Sabah's longest river, the Kinabatangan River has enormous wildlife diversity including a number of species endemic to the Island of Borneo such as the Orangutan, proboscis monkey and Bornean Pygmy elephant. Sabah, Malaysia's eastern state with rainforests and beaches is truly an exciting eco-tourism destination.

Spot and save orangutan tour: Besides Sumatra, orangutans are presently found in rainforests on Borneo Island, the only great apes found outside Africa. Some can be spotted in the world famous Sepilok Orangutan Rehabilitation Center in Sabah and other centers in Sarawak or Kalimantan. Orangutan classification into three subspecies reflects their geographical distribution. Physical characteristics and behavioral differences are evident. There are three subspecies of orangutan in Borneo, Pongo pygmaeus morio, the Northeastern Borneo orangutan, Pongo pygmaeus wurmbii, the central Borneo Orangutan and Pongo Pygmaeus pygmaeus, the Northwest Borneo orangutan.

Spend excitement-filled thrilling hours as tourists glide down gorgeous rivers, tread through the Borneo jungle trying to spot orangutans. Here is an opportunity to understand how these rare species are highly developed, individual and caring and what can be done to save these endangered species. Spotting birds, reptiles and even a rare sighting of proboscis monkey along specific routes contribute in making this tour truly satisfying.

Turtle Island tour: Close to the Sepilok Orangutan Rehabilitation Center, Sabah is the Turtle Island. The Turtle Islands Park lies 40 km north of Sandakan in the Sulu Sea off Sabah's east coast. It is popular for its unique marine wildlife and as the breeding ground for green turtles in all of South East Asia. Visitors to the park can get up close and personal with sea turtles in their natural habitats. The best time to visit this park is during the driest month when seas are also calm, between March and September.

Meandering through the mangrove woods, watching green turtles marching quietly to the shore to lay eggs, little baby turtles hatching and making their way to the sea, all happen during the night. In the morning, the beaches and sea water beckons snorklers.

Rainforest and trekking adventure: The Island is covered by lush tropical rainforests and mountains. There are many unexplored, untouched areas. Lush rainforests are home to richest flora and fauna in the world. The scenery that unfolds is captivating. Picturesque rivers, different creatures sharing the unspoiled rainforest add to making the adventure-filled trekking interesting and unforgettable. The Dayak tribes of the island possess a wealth of information. They know the ecological and cultural treasures that lie hidden deep within the rainforests. The tour is best for group travelers. It would be fun trekking in groups through the rainforest, sleeping in hammocks, climbing mountains and finally unwinding on the beaches.

Dayak tribe culture tours: The Dayaks tribes migrated to Kalimantan (Indonesia part of Borneo Island) from other parts of Asia about 3000 years ago. Dayak settlements are found along the Rivers of Kalimantan. The Dayaks have moved on keeping pace with time. They don't don the traditional garb but only during traditional festival and ceremonies. In the past, they lived in houses called Betang-betang, the Dayak Long House. Today, it is very rare to see these traditional houses. West Kalimantan has the most, with a few in Central and East Kalimantan areas.

A wedding, harvest time or New Year are best occasions to go on Dayak tribe cultural tour when much of their culture comes alive. Dayaks living along the Mahakam River still continue to maintain their traditional way of life and culture. The Dayak tribe culture tour is an ideal way to experience their unique culture, sample food, purchase their art pieces, participate in ceremonies and understand their customs and practices. It can be intriguing to see the elders practice traditional medicine and mark their status within the community with intricate body tattoos and heavy ear adornment.

Mahakam River adventure tour: Mahakam River is the largest river in East Kalimantan. It is 980-km-long and flows from the district of Long Apari in the highlands of Borneo, to its mouth at the Makassar Strait. There are about 76 lakes spread in the Mahakam river basin and about 30 lakes are located in the middle Mahakam area. The river is rich in flora and fauna, a total of 147 indigenous freshwater fish species and the freshwater dolphin Irrawaddy Dolphin, a critically endangered fish species. It is a breeding and resting place for hundreds of bird species as well.

The idea of going on a house boat and cruise the Mahakam River is to get to know more about the longest river on the Island, experience the quietness of the river while enjoying the beautiful scenery of the surrounding riverside.

Trekking Mount Kinabalu: Mount Kinabalu is situated at the top tip of Borneo, in the east Malaysian border of Sabah, located within the Kinabalu National Park, which has been declared as a World Heritage Site by UNESCO.

Mount Kinabalu is the highest peak between Mt.Everest in the Himalayas in the north and the peaks of Puncak Jaya in New Guinea in the South. It is the tallest mountain in Borneo. Its summit, the Low's Peak stands at 4,095 meters above sea level. The mountain is most accessible. With the help of an accredited guide it is doable even for first-timers. There are well-marked paths and periodic rest stops. No specialized climbing gear is needed. The entire journey is 8.85km. Certificate of achievement is given to all climbers who reach the summit.

The view that opens up upon reaching the peak of the mountain is indescribable. It is nature in its purest form. Passing through different vegetation zones on the way up the mountain, the sunrise at the top, the mid-morning mists or the glowing mountain on a full moon night are special attractions that makes trekking the summit most enjoyable.

Kinabalu National park tour: Kinabalu National Park at the foothill of Mount Kinabalu is Malaysia's first heritage site in appreciation of its rich biodiversity. The area is about 745 sq. kms. Besides the mountain climbers, the park is visited by day-trippers and short holiday makers. The route to the summit is the main attraction. But the park itself has several shorter trails which showcase the local plant life and animal life. A nature walk tour down the trails can lead up to the Poring Hot Springs.

An artificial hot spring, The Poring Hot springs is part of the Kinabalu National Park; it is 43 kilometers away from the park headquarters. There are tubs and pools filled with steaming water. Open-air and private tub baths are available. After an enthralling mountain climb, trekkers enjoy a soothing bath and prefer to relax their weary and painful muscles. The water is believed to have therapeutic properties.

Other attractions include the Butterfly Sanctuary. During the Butterfly season, in March, April and May the place come alive with colorful butterflies fluttering around. A nursery and hatchery for education, research and preservation purposes are part of the sanctuary. Other attraction in the area includes the Poring Orchid Conservation Center which houses the largest collection of Sabah orchids as well as rare endemic orchids.

A must-do activity in the park is the 41 meter high tree top canopy walk. The purpose of a canopy walk is to provide an opportunity to hang around in the tree tops, view Borneo rainforest's flora and fauna and experience the wild life that is found there. It is absolutely safe even for kids.

Borneo food tour:Food tours are popular in Central Kalimantan. Borneo Food tour is an entertaining and informative way to see a different side of Borneo and check its culinary treasures. It can be a unique learning experience if there is interaction and teaching session by local resident cook.

Kalimantan Borneo is much more wild and undeveloped compared to Malaysia Borneo. The Malaysian side is equipped to cater to mass tourism but anyone who wants a more authentic and less treaded destination would prefer Kalimantan Borneo.