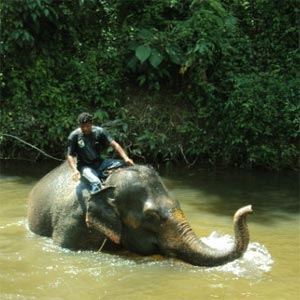 Travel and sightseeing in Laos awakens you to the laid back ambience and serene beauty of the land. While the sun sinks into the Mekong River, discover Laos; a delightful sojourn to the Asia of old.

Laos or Lao means 'Please don't rush'. True to its name, visitors to Laos are drawn by the laid-back lifestyle of this wonderful land which is often referred to as 'forgotten'. But this land of a 'million elephants' enchants you with its lush plateaus, temple-dotted towns and sleepy islands under the quirky capital Vientiane.

History reveals that Laos dates back about 10,000 years. Laos is quite a unique spin on the Southeast Asian experience. Perhaps, Laos is the perfect destination for those who want to break away from the ordinary - this land of mountains and mists and untamed natural heritage offers unrivalled peace and tranquility.

Visit this lesser known but charming country at least once. Indulge in the generous hospitality and unspoiled environs of Laos with its decorated old and new temples and replenish your soul.

Laos is nestled in the heart of Southeast Asia. The glistening emerald green rice fields beckon the visitor offering an exotic vacation escape unlike any other. The meandering Mekong River matches the rhythms of life with its winding ways and patterns across Laos. The glistening mosaic of temples, cascading waterfalls and ancient limestone carvings of images of Lord Buddha in gold are mysterious to say the least.

The relaxed pace of life at Laos gently welcomes the tourist, a pleasant change from its busier neighbors. While Vientiane is the waterside capital of Laos, Luang Prabang is a perfectly preserved blend of rustic and colonial architecture on the one hand and gilded monasteries on the other.

A journey to Laos is indeed a journey into a world long lost; a world that is beautiful and rich in natural beauty and culture.

Luang Prabang, the ancient royal capital of the Lan Xang Kingdom, is situated in northern Laos and is a designated UNESCO World Heritage site. This is Laos' primary tourist destination and Asia's most beautiful spot complemented by the country's capital Vientiane. French architecture, glistening temples, and extensive natural beauty embody Luang Prabang. Royal palaces and remains of the ancient centers of Buddhist learning make this a spiritual destination as well.

Xieng-Khouang, most commonly known as 'Plain of Jars' is a flat high plateau with hundreds of giant stone jars, some even as large as 3.25 meters high. These are strewn all over the plateau. Legend has it that these were made to store large quantities of wine for a huge party to be celebrated after the conquest of this Pakhanh city. While the hot springs of Meuang Kham are worth visiting, so too is the Tham Piu cave which was used as a bomb shelter by villagers during the Vietnam War.

Vientiane is the capital of Laos and is located strategically on the curve of the Mekong River, sharing the border with Thailand. This attractive old town houses ancient temples, linear boulevards and sophisticated galleries, theatres, nightclubs, shopping malls et al. Restaurants offering culinary delicacies from across South East Asian countries can be found here.

Bokeo, the land of sapphire is located along the three border intersection of Laos, Myanmar and Thailand; forming this golden triangle.

Luang Namtha which is a Northern Province bordering China and Myanmar has dense forests, and is a wildlife protected area. Asian wild dogs, tigers, clouded leopard, bears and gibbon abound here along with a large bird population.

The picturesque beauty of this province with mountains, and old temples, though torn due to wars, is still attractive and noticeably different from classical temples.

H'mong village is on the way to Muang Khoune, closer to nature and its elements. A natural hot spring flows into a stream for the peasants to enjoy the warm water. Natives believe in the spring's magical properties of curing skin diseases.

Savannakhet, the second largest town on the Mekong River bank is rich with commercial activities with lively atmosphere. This is the place where numerous dinosaurs and Stone Age equipment were discovered. A noteworthy pagoda constructed during 553-700 AD is also found here.

That Ing Hang is located about 15 kilometers to the north of Savannakhet and is a high point with relics dating back to several centuries and this attracts a large number of Buddhist pilgrims every year.

Heaun Hin is the stone house built in the 9th century and has the historic relic of Khmer civilization in the center of Laos.

Wat Phu, situated on the Phu Passak slope is perhaps the largest example of Khmer architecture. A traditional festival called 'Wat Phu' is celebrated annually during the full moon of February.

Khone Phapheng fall is a tremendous mass of stone tinted sometimes with a rainbow. This is Lao's Niagara and falls into Li Phi, renowned as a fish basin.

The culture is dramatically different in Saravan, located on the Southeastern part of Lao. Main attractions here are the Bolovens plateau and Se Xet waterfalls. A savvy tourist can ride an elephant around the jungle in this land where spiritual ceremonies exist even today.

This is the least populated land among the Southeast Asian countries. Laotians are warm and welcoming. As Laos is just awakening to tourism, the facilities and services do not match with that of western standards. It involves bumpy road travels and basic accommodation.

Interestingly, shows of emotion and anger are rare in Laos and are considered taboo. It is this 'laid-backness' that makes this country so exceptional and is one of the many lures which draws travelers from all around. Professional English speaking guides are available in Laos.

Although only less than 5% of the land is farmable, 80% of the population works in agriculture. Rice and vegetables fields, well hidden behind tree lined pathways can be seen in Laos. French style building near Buddhist monasteries narrate stories of the country's rich cultural and troubled past.

Travel to Laos and consume a feast of specialties during a hands-on cooking class in a delightful garden pavilion; play petanque, the national pastime and interact with monks and understand the serene lifestyle and philosophy of Buddhism, the dominant religion of Laos.

Full of smiling faces, laid back ambience, and scrumptious cuisine, Laos is an indeed a land of true beauty - from external nature and its amiable people.