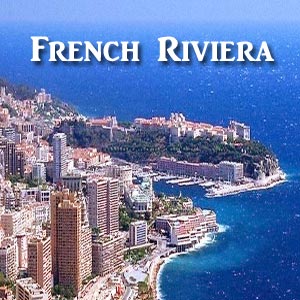 Cote d' Azur as the French Riviera is called, is protected by the Alp Mountains from the harsh winds. Hence a pleasant mild Mediterranean clime is maintained. Many a savvy traveler can indulge in a typical France experience at the Riviera in a perfectly balanced climate. There is abundant sunshine matched with natural beauty and this is a place where even winter can be the 'best season'.

The pines, mimosas and jasmine and other delicately fragrant trees fill the sultry warm air of the Riviera and the amphitheater scenery is perfectly complimented by rare views of the French villas amidst the magnificent mountain heights. The multitude of hotels and rental villa options are designed to meet the travel needs of the tourist to Riviera as a vacation destination offering unforgettable memories.

With ports like Nice, Cannes, Ville franche-sur Mer and Monaco offered by various cruise lines, the French Riviera vacation is bound to be a memorable one. There are more than thirty harbors equipped with small pleasure boats and luxury yachts which add the Riviera flavor for the adventure tourists.

Nice is one of the most sought-after resort towns in the French Riviera. Baie de Anges is a natural amphitheater and Nice offers the opportunity to showcase shops and cafes in its old town charm. The panoramic views of the city and the bay are a delight to watch from uphill Castle Park.

The fresh air, incredible scenery at the Riviera has been the most sought-after spot for artists including Picasso and Monet. And the palm-lined boulevard at Cannes, with sandy beaches and public gardens is perfect for leisure walks. It also plays host to the International film festival.

Monte Carlo is a tiny sovereign state that houses the world renowned Casino, a magnificent structure designed in 1878 by Charles Garnier, who also designed the Paris Opera.

At the St Paul de Vence, visitors are charmed by the best preserved medieval towns found on a craggy hilltop. And surprisingly, this walled town has hardly changed over the centuries. Visitors can also browse through shops and galleries and enjoy the picturesque buildings, in narrow cobbled lanes.

Antibes is yet again another medieval town huddled behind the ramparts of a fortified tower. Picasso museum and a Romanesque cathedral are popular sights here.

Vallauris is full of orange groves and mimosa trees. A haven for artists, this is where Pablo Picasso, stayed from 1947 till his end. A thirteenth century Vallauris Castle which houses the Picasso museum can be found here.

St Tropez and St Raphael situated at the famed Golden Corniche are enormously popular with cruisers as their sheltered harbors offer space for luxury yachts. The breathtaking views of the rocky Esteral Hills and the sea beyond are not to be missed.

Western Civilization is synonymous with Christian Civilization. Church was an integral part of Western Culture from the early times and this fact is deeply etched in all Western Churches. Churches in French Riviera are no exception - they are richly adorned with golden embellishments, intricate metal paraphernalia and exquisitely hand crafted marble accoutrements. You will find Baroque style - or the term more in vogue - Renaissance architecture in most of these churches - probably owing to their origin in medieval times or equally in part to a manifestation of the wealth and power the church commanded.

The Eglise Sancta Maria in Albis is a large cavernous church, a place to visit not necessarily for religious reasons alone - its baroque decorations carries tales of a century (from 18th to 19th) with marble balustrade in front of the high altar in the shape of a Greek cross with magnificent polychrome wood casements.

The Eglise Notre Dame De la Nativite is yet another historical monument, with baroque style illustrations - and an early 18th century ceramic fountain.

In the old town, one can visit the Eglise Saint Michel at Vilelfranche Sur Mer which stands transformed to suit contemporary tastes with Christ sculpted in fig tree wood by a galley slave.

The Collegiale Saint Martin is a church adorned by 'Gloria to the Holy Sacrament' and its high altar with woodwork, and oriental façade combining the rectangle and the ellipse is remarkable.

The Eglise Sainte Marguerite et Rosalie was built in the 15th century and this facade was restyled in the 17th century. A museum containing treasures of religious objects in silver and gold is found here.

The Menton is a place where one can find the religious heart of the community - with festivals of music celebrated here every summer. Palais La Scaris houses Nice's aristocratic residences - transformed into a museum.

Another baroque masterpiece in Nice is Chapelle de la Mi Seric Orde which belongs to the brotherhood of Black Penitents. The ostentatious decorations are striking and everything here has movement, dynamics, light and lyricism.

The Cathedrale Sainte Reparate at Nice is a Rossetti, an example of early Roman baroque and the entire building is preserved for its original decoration.

The Citadelle Saint Elme at Nice was built by Duke of Savoy to protect the country from invaders. These constructions were entrusted to Italian engineers and they stand evidence to a new type of bastion fortification. This remarkable complex today accommodates the Town Hall, the Volti Goetz Boumeester Museums and the Roux Collection.

French Riviera boasts of several types of beaches, the public and the private ones. There are hundreds of public beaches along the coast and some of them such as Antibes are tiny. It can hardly accommodate five hundred people. Sheltered artificial breakwaters make it a safe place for children to swim.

La Croisette beach at Cannes is a much larger one with huge selection of cafes, restaurants, and short walking space over the road. This beach is popular during summers because of the bars and pulsating nightlife.

Menton beach is strangely artificial and the summer crowd is absolutely overwhelming. This beach probably has more pebbles than sand which many find uncomfortable.

Nice also hosts a pebble beach which is crowded all the way in summer. It would be good to take deck chairs and blow mattress to sit on - in an otherwise extremely uncomfortable beach due to large pebbles.

In contrast, Juan les Pins is a sandy beach with a large parking lot behind the harbor. Inexpensive restaurants can be found here. This beach is most suitable for short walks.

Villeneuve Loubet located at the edge of a busy main traffic has both sand and pebbles. This beach is not suitable for young children.

Cap d' Antibes is an exclusive part of the Riviera and this is a pleasant beach.

There are plenty of private beaches at the Riviera and these beaches lie along the coast. They charge about ten dollars a day for a spot with a lounger, parasol and insanely expensive drinks service.

At Nikki beach you can bump into Hollywood stars or celebrities who head to south of France for a private vacation. For those who cannot afford these private luxuries, there are inexpensive private beaches between Cannes and Antibes.

Tourist spots at the Riviera

St Jean Cap Ferrat at Nice is a peninsula that projects straight out of the Mediterranean. This is a playground for billionaires. The promenade along the beach with tiny bathing beaches is open for the public. The extravagant pink palace of the Baroness Beatrice de Rothschild is in the center of the peninsula. Seven perfumed flowering gardens surround the museum which is open for visitors.

The Fondation Maeght is a destination in itself. As one of the world's most beautiful small museums, it is deemed as a temple for art lovers. Surrounded by pine trees, this is located within walking distance of St Paul's village and features picture postcard sceneries. It houses one of the most outstanding collections of art with unusual architectural design, created by Catalonian architect Josep Lluis Sert. Maeght's unusual roofs lend a feeling of being in a cathedral for the tourists. The works of Braque, Chagall, and Miro are exhibited here. Stained-glass windows designed by Braque can be found in a small chapel adjacent to the main building. A sculpture garden presents Pol Bury's steel fountain and a mosaic by Braque adorns a pond.

The Villa Rothschild and garden of Cannes are stunning examples of symmetrical French gardens, filled with palm trees, agaves and ornamental ponds. About hundred varieties of roses can be found in the rose garden nearby. A Spanish garden similar to the one designed by Aranjuez in Madrid, a Japanese garden can also be found here. A stone garden is full of gargoyles, arches, foundations and sculpted capitals.

While at Cannes, do not miss the Palais des Festivals, a space designed by architects Bennett and Druet. The total area of the Palais is about 25,000 sq ft which comprises several rooms, auditoriums and can hold about 2300 people at once. The walk up to the main entrance and the base of the building is dotted with hundreds of hand prints and signatures of stars.

The Eglise Notre Dame De L' Assomption is another famous church that stands out for its medieval architecture and classic façade. The colossal pilasters are truly magnificent.

It is the climate of the Riviera that has attracted and inspired painters, writers and architects across the globe. Even in winter, the rainfall is scarce and not harsh, cold or snowy. And spring and fall are probably the best times to enjoy and indulge in the beautiful scenery. Sometimes, mistral, a cold gusty wind blows from northwest and lasts several days.

Things to do in the French Riviera