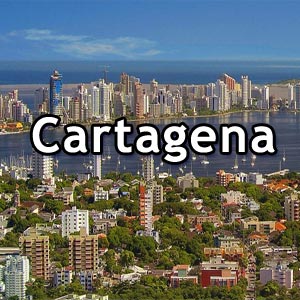 Colombia is perhaps the only country in South America whose beaches are lapped by both the Atlantic and the Pacific. A tourist can experience spectacular biodiversity, ancient heritage sites and the hustle-bustle of modern life too.

An odd-looking pear-shaped with a thin top, Colombia is perhaps the only country in South America whose beaches are lapped by both the Atlantic and the Pacific. Colombia borders Venezuela, Brazil, Peru, Ecuador and the Panama.

Wedged between Venezuela to the east, Brazil to the south, and the Caribbean to the north, it is cut across by the Andes mountain chain running across the American continent. The diverse geography divides its territory into five broad regions, the Amazonian, Andean, Atlantic, Orinoquian and the Pacific.

Colombia is incredibly diverse in its climate ranging from rainforests to snow covered peaks, to deserts, flatlands, forests and several others.

The diversity of this country is sure to astonish tourists. Modern cities, skyscrapers and nightclubs on the one hand, gorgeous Caribbean beaches, jungle walks and typical Amazon safaris on the other - Colonial cities boasting of archeological ruins, high mountain trekking, whale watching, coffee plantations, scuba diving and surfing!

Is it this dreamlike quality of Colombia that attracted authors like Gabriel Garcia Marquez, who brought to life the 'magic realism' of the place?

The sun is forever overhead, the vistas are heart stopping and to top it all, the warmth of the local people puts the traveler at ease - it is difficult to leave a sojourn like Colombia. While the essence of Colombia lies in its mountains and in the alpine cities of Bogota, Medellin and Cali, and the smaller cities of Zona Cafetera.

A savvy tourist can discern good infrastructure in the mountains, with drinkable water, well maintained roads and a laid back culture. The accent is unhurried in this Caribbean basin.

Colombia is one of the few countries in the world, with bird diversity of nearly 1876 species. Colombia is indeed a paradise for bird watchers with innumerable options in the cloud forest and paramos of the Andes or the Sierra Nevada de Santa Marta, the jungles of the Amazon and the Choco regions, the Eastern Plains and the lowlands of the Caribbean region and the inter-Andean valleys.

Some of the new species of birds found in the 21st century include Chestnut capped Piha, Munchique Wood wren, Stile's and Upper Magdalena, Gorgeted Puffleg, and Antioquia Brush Finch. The birds of Colombia astonish the visitors with an array of colors, living nature and winged adventure. Colombia is a country with a great variety of habitats and altitudinal floors with diverse flora and fauna. Some of the best world heritage sites are located in Colombia.

Activities and development of the Cartagena region dates back to 4000 BC. It was in 1984 that Cartagena's colonial walled city and fortress were designated a UNESCO World Heritage Site. Varied architecture, mainly colonial in style adorn the downtown area of Cartagena, although Italian style buildings can also be seen, like the Cathedral's bell tower.

A museum of modern art and the San Pedro church are near Pedro square. Plaza de Bolivar is a small park with a statue of Simon Bolivar in the center. The city's elegant colonial buildings with lovely balconies surround the plaza. The office of the Historical archives, the Government palace and the Cathedral of Cartagena which dates back to the 16th century are other notable buildings in the area. The University of Cartagena with its Augustinian Father's convent and the Santo Domingo Church, and the remodeled Charleston hotels from Saint Theresa Cloister adorn Cartagena although a little removed from the square.

A downtown walk takes you to one of the greatest fortress ever built by the Spaniards. An extensive system of tunnels is connected underground and some of the tunnels are open for public viewing.

The Getsemani neighborhood is one of the most prominent. The Centenary Park is the most popular place here. Over the years the park has acquired a sloth, two gilo monsters and a few monkeys. This area is also home to popular clubs like La Carbonera and Mister Babila.

Bocagrande or the Big Mouth is the most sought after areas with many restaurants, shops and art galleries. Its special appeal is the beaches and nightlife around Avenida San Martin. The beaches of Bocagrande are muddy and there are breakwaters about every 200 yards. A boat ride can take the visitor right into the sea to see the real Caribbean color. A spectacular sea walk lies on the bay side of the peninsula. In the center stands the statue of Virgin Mary.

The Los Katios National Park is located in the northwest of Colombia in that part of Darien Gap, shared by Panama and Colombia. The park was declared a World Heritage Site in 1994 due to the extraordinary diversity of plant and animal species represented. The park also has about 25% of the bird species of Colombia.

The Malpelo Island located 235 miles from Colombia's Pacific coast is uninhabited except for a small military post manned by the Colombian army, established in 1986. Visitors need special permission from the Colombian Ministry of Ecology to visit this place. Sheer and barren rock with three high peaks can be found in this island which is surrounded by a number of offshore rocks. Malpelo nature reserve is a plant and wildlife sanctuary. Home to unique shark population, which come in swarms of 500, hammerhead sharks and hundreds of silky sharks, frequent diving expeditions are popular. Malpelo is one of the few places where Small tooth sand tiger was spotted alive in the dive site El Bajo del Monstruo.

Malpelo is referred to as the 'hot spot' as it is composed of pillow lavas, volcanic breccias and tertiary basaltic dikes. In 2006, Malpelo was declared as a UNESCO World Heritage Site, due to the bio diversity of this site.

Momprox or Mompos, which is officially known as Santa Cruz de Mompox has still preserved its colonial character. Located on an island in the Magdalena River, Mompox depends upon tourism, fishing and commerce generated by the local cattle raising.

Tierradentro is a National archeological park situate at Inza department of Cauca in Colombia. The park is about 100 m away from the capital of the department Popavan. Known for its pre-Colombian hypogeal, found in several excavations, some of the archeological places include Alto del Aguacate (Avocado Hill), Alto de San Andrés, Alto de Segovia, Alto del Duende and El Tablón. The park generates significant revenue to the local economy and these sites are part of the UNESCO World Heritage Sites.

Santafe de Bogota is a city of contrasts. It is nestled in the Andes, 2620 m high with several high-rise buildings standing next to colonial churches and universities, theatres and shantytowns.

Founded in 1538, Bogota had its name shortened until recently when its original name has been reinstated. In addition to being the capital of Colombia, Bogota is also the largest economic center, with most companies of Colombia having their headquarters in Bogota. The emerald trade is a huge business here generating millions of dollars and domestically produced rough and cut emeralds are bought and sold daily.

By and large, Bogota is divided into zones, each enjoying distinct characteristics.

While Zona 2 is Norooccidente, Zona 3 is Occidente, with western sectors.

Zona 4 has industrial zones is largely labor prone; Zona 5 is Centro with city's chief and most important commercial cultural and governmental and financial zones. Zona 6 includes surrounding areas and Zona 7, other cities.

Bogota has indeed expanded from a colonial center and thus most of the churches are found here. The mountains provide a scenic backdrop in the east of the city, and the famous peak Cerro de Montserrat is favorite with Bogoterios who go here for spectacular views of the park, bull ring, restaurants and religious sites. The church here houses the statue of the Senior Caido Fallen Christ, claimed to be a place of miracles.

Bus transportation is excellent here with large busses called bus, smaller busses called busetias and buseta and still smaller ones, microbus. Getting around the city is fairly simple because of the naming convention followed in the streets, with older ones named Carreras and those that go south Calles and so on. Taxis, bicycles abound in the city. The ciclorrutas is an extensive bike path serving all points of the compass.


Top of the Page: Cartagena Colombia