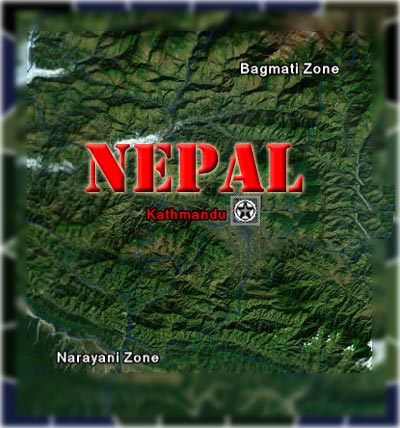 Nepal - nestled among the Himalayan ranges is a popular holiday getaway, especially for trekkers and river rafting enthusiasts. This Nepal holiday guide gives you exhaustive information to plan your holiday.

Nepal - The Valley of Gods is a Hindu kingdom nestled in the valley among the snow-clad Himalayan range. Renowned all over the world as a premier trekking destination, Nepal trekking can take you through breathtaking locales. Legend has it that this valley was an enormous lake in the lap of the Himalayas. Magnificent temples, warm hearted people, breathtaking mountain views and lush hill terraces - a tour of Nepal is made of these! Check out our Nepal holiday guide to find information on Nepal weather, Nepal history and Nepal tourism.

The history of Nepal goes way back to the Hindu epics of the Puranas and Mahabharat. It also finds mention in the Buddhist and Jain scriptures. Several dynasties have been part of the history of Nepal - The Gopalas, Abhiras and the Kiratas. Legend has it that the Lichavi dynasty is among the earliest rulers of Nepal.

The Hindu Buddhist culture of Nepal can be traced to the Newars who live in the valley. The Nepalese people are generally easy going and tolerant and soft-spoken by nature. Their hospitality is well known. The ethnic diversity among the people of Nepal is surprising for such a small country. The northern Himalayan region has many Tibetan speaking groups such as the Lopas, Dolpas and Sherpas.

The Valley people have different and varied backgrounds based on occupational and caste differences. The Terai region is home to the Majhi, Kumbhal, Darai and Tharus groups. They speak dialects from the northern part of India such as Maithili and Bhojpuri.

It is easiest to travel to the capital of Nepal - Kathmandu by air. Tribhuvan airport is located to the east of the city. There are direct flights to Kathmandu from Delhi, Bombay, Bangalore and Kolkata as well as Bangkok, Doha, Frankfurt, London, Singapore, Paris and Osaka. The major highways that connect Nepal to India are the Tribhuvan Rajpath and Prithvi Rajpath.

If you are on a holiday in Nepal, visit the picturesque Dhunche lake. The Gosainkunda lake is a revered place of pilgrimage. No tour of Nepal is complete without a glimpse of the breath taking Himalayan peaks. You can view the magnificence of the Himalayas from Kakani. Catch a glimpse of Himalchuli, Annapurna, Gaurishankar and Choba Bhamre.

Many river-rafting enthusiasts can look at Nepal as a wonderful holiday destination. The Trisculi River is close to Kathmandu and you can plan it with a trip to Pokhara or the Royal Chitwan National Park. The other rivers that offer river-rafting opportunities are the Kali Gandaki and the Bhote Koshi. Experience the adventure of white water rafting on the Karnali and Marshyangdi rivers.

Syayambhunath is a Buddhist Stupa situated to the west of the valley and is nearly 2000 years old. This stupa is one of the holiest Buddhist shrines in Nepal and is listed under the world heritage sites by UNESCO. Other shrines popular with tourists to Nepal include Boudha, another immense Buddhist stupa behind the airport, the Krishna Temple at Patan Durbar Square and the Surva Vinayak Temple at Bhaktapur.

The magnificent temple of Lord Pashupatinath is located on the banks of the river Bagmati. Pashupati is one of the incarnations of Lord Shiva and this temple is of religious significance to the Hindus. The Boudhanath Stupa is said to be among the biggest in the world. Situated about 300 kms southwest of Kathmandu is Lumbini - the birthplace of the Buddha. No tourist to Nepal would miss the Ashoka pillar, Mayadevi temple, Puskani Pond and Lumbini Museum.

This mountainous country offers many a trekking opportunity. Kathmandu is the starting point for several treks, especially in the Helambu and Lang Tang areas. Depending on the route chosen, these Nepal treks can last for just a day or go on for two weeks. Trekking in Nepal must be undertaken with the assistance of licensed guides.

There are several competent trekking agencies that will also assist in the hiring or purchase of essentials - food, water, tents and sleeping bags. Nepal trekking can be undertaken to suit your fitness level - be it simple treks or even challenging heights. You can chose to stay at local lodges and soak in the local flavor.

Trekking in Nepal is an ideal holiday - one that will take you through verdant green valleys, turbulent rivers and picturesque rhododendron forests. Enroute you can visit ancient Hindu and Buddhist shrines. Whether you follow the conventional trekking trails or chart an unbeaten path, trekking in Nepal is sure to be an extremely rewarding and rejuvenating experience.

According to ancient folklore, the city of Kathmandu was shaped like a khukri knife and was home to magnificent temples and royal palaces. Thamel near Durbar Square and Jhodchhen also known as Freak Street are among the better-known areas of Kathmandu. Patan is renowned for its fine arts.

It is evident in the exquisite temples and Buddhist monuments found here. Bhaktapur lies at a higher altitude and is famous for its pottery and weaving. Traditional painting styles such as Madhubani and Janakpur paintings are followed by the craftsmen of southern Nepal to create wall paintings. Nepalese rice paper made from the bark of the Lokta is used to create lampshades and calendars.

The Terai region is famous for basket weaving - baskets in different sizes and shapes that are used for household and decorative purposes. The traditional food of Nepal is not gourmet fare but consists of simple rice and boiled lentils and accompanied by curried vegetables and pungent pickle. The tea is thick and milky.

Nearly 15% of Nepal has been marked as protected wildlife preserves. Considerable efforts have been taken to preserve the Royal Bengal Tiger and the one-horned rhino. The Royal Bardiya National Park in Terai is famous for its tigers and game fishing. Spread over nearly 1000 sq. kms, this national park is home to river grasslands and sal forests.

It was the hunting reserve of the ruling dynasty till the 1950s. Bordered on the south by the Babai River and to the north by the Shiwalik hills, the Bardiya National Park is a popular holiday destination for tourists to Nepal. The national park at Chitwan is home to marsh crocodiles as well as four species of deer and other smaller animals.

Winter weather in Kathmandu can occasionally dip below zero degrees Celsius. Daytime weather in Kathmandu during winter is ideal for a holiday, with the temperature rarely crossing 20 degree Celsius. The rains in Nepal are generally overnight showers and intermittent spells during the day.

Some of the popular holiday resorts in Nepal are Nagarkot and Thamel. Nagarkot offers the nearest point for viewing the Himalayan peak of Mount Everest. Here you can find hotels and resorts of all price ranges. Dhulikel and Kakani are other holiday resorts in Nepal. In Kathmandu, you can find hotels for as little as 10$ or even 150$. You can partake of varied cuisine, be it Nepali, Tibetan, traditional Newari food or even Thai, Japanese and Korean. It is advisable to drink only bottled mineral water since tap water has high mineral content.