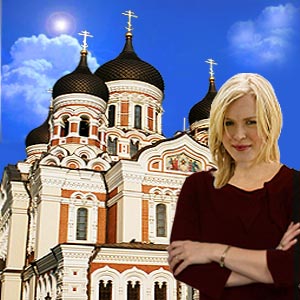 Located off the Baltic Sea the Republic of Estonia lies in Northern Europe bordering Russia and Latvia. It is land of vast forests, islands and beautiful lakes attracting huge number of tourists year after year. Estonia is a unique combination of old world charm with manor houses, medieval architecture and modern development. It is a small country with more than half area covered by islands and forests. Locals of Estonia speak Estonian which is closely connected to Finnish language

From the middle Ages, Estonia was occupied and ruled by Russians, Swedes and Germans leaving remarkable influence on their culture and architecture. Estonia achieved independence in 1991 and subsequently merged with the European Union in the year 2004.

Estonia is a tourist's paradise with amazing places of interest. Monuments, art galleries, museums if you like the hustle-bustle of tourist spots or a landscape with endless woods, lakes and moors if you adore nature; Estonia has it all.

Tallinn, Parnu, Tartu, Haapsalu, Paldiski, Kuressaare, Narva are some of the 'must-visit' places of Estonia that have most of the tourist attractions.

Your journey in Estonia begins by landing in the capital of Estonia, Tallinn, located in the north-eastern part of the country. Tallinn is an embodiment of distinctive ancient aura representing the feel of 14th and 15th centuries and it is one of the well protected medieval cities of Europe

Tallinn Town Hall, an architectural beauty, is one of the popular places of interest in the capital. Much of the action in the city like cafes, merchant houses is clustered in the town hall square and is always packed with tourists and locals alike.

St. Olav's Church and Tower, a 13th-century Gothic style church is one of the tallest buildings in the world with 159-meter spire and offers a visual feast to all tourists.

Toompea Hill, made up of lime stones stands tall in the center of Tallinn. Toomkirik or the Dome Church is one of the landmark buildings of Toompea hill which is decorated by numerous shields and various coats of arms belonging to the 17th-20th centuries. Alexander Nevsky Cathedral built during Russian rule is also worth visiting.

Kadriorg Park, an artificial park near old town invokes a sense of calmness and serenity and is known for its tastefully done swan pond and the adjacent palace.

Lahemaa National Park, the country's largest national park, covering an area of more than 70,000 hectares is the most famed natural park of Estonia. The scenic view with canopy of trees and wildlife is a perfect place to escape from the humdrum of daily life.

Tallinn is also a city of museums and monuments. People throng to enjoy the City Museum which introduces the tourists about the city and its journey of development till date. The Museum of Photography housed in the prison building also provides a unique experience.

Song Festival, a musical extravaganza is a very popular event of Tallinn. Thousands of singers participate in the mega event held in the Song Festival Grounds on the outskirts of Tallinn once every five years in the month of July.

Tartu known as university town of Europe is home to many international students and has been hosting many academic summits and conferences. Unlike the city of Tallinn, Tartu is calm, relaxed and laid back; surrounded by an intellectual aura.

Apart from university, Tartu has some amazing places to explore like St. John's Church, Raekoja Plats (the Town Hall Square), Toy Museum and Vanemuine theatre. St. John church has a unique feel with a collection of over thousand terracotta figures housed within.

Haapsalu is located along the west coast of Estonia. This place was the favorite holiday destination of Russian rulers who built a custom designed railway station for their convenience. The construction is appreciated for its vastness and spectacular design.

If you are in a mood to pamper yourself, Happasu is the place to visit as it is also famous for spas and therapeutic mud treatments

Narva is located on the border of Estonia and Russia. If you like sun and sand, Narva treats you with lovely beaches and clear sea waters. Fortress, a thirteenth century castle and Town Hall are the magnificent structures of the city. Alexander Church built with red brick and granite is an important landmark of the city.

Parnu is all about sun soaked beaches, silvery sand and colorful festivals. The place is always agog with fun and entertainment. It draws huge number of tourists; more than any other place in the whole of Estonnia. Parnu is titled as summer capital of Estonia and known for its health centers, seaside resorts and yachting harbors.

Do not miss visiting Rüütli Street which showcases some of the oldest and most beautiful buildings on either side of the street. Elizabeth Church built in baroque style; the Red Tower and Vallikaar open-air stage are some of the important sights Parnu offers to visitors.

Saaremaa is Estonia's largest island located in the Baltic Sea, just south of Hiiumaa Island. The capital of Saaremaa, Kuressaare is popular with visitors during cultural events like Maritime Festival, Opera Days and castle days

You can board a bus or train to reach this dream destination or you can even opt for air route as Estonia is well connected by all the means of transportation. Eurolines, a reputed bus service connects Tallinn with cities in Germany and Poland, and from there to entire Europe.

Trains operated by GO Rail of Europe are the most convenient way of reaching Estonia from Moscow. If you are already in Finland and want to hop over to Tallinn, go for a fun-filled ferry ride. There is a frequent service of ferries, hydrofoils and catamarans plying between Helsinki and Tallinn every day and they are easy on your pockets too.

The national carrier Estonian Air connects Tallinn with many important cities in Europe and Russia, and at reasonable prices. Air Baltic and Finnair are some of the other reputed airlines operating to and from Tallinn. EasyJet air lines provides services between Tallinn and both London and Berlin.

Estonian weather ranges between two extremes, It can be around -30C in winter time and summers may see +30C too. Best time to visit Estonia is May - September. But if skiing is what you enjoy; pack your bags in the months of January - February.

The Estonian food is highly influenced by Germans, who ruled here for centuries. Estonians typically savor black bread, pork, potatoes and garden vegetables. Pancakes, beet salad, honey, herring, pickled pumpkin, and crayfish are some of the commonly found local recipes. If you happen to land up in any of the parties there, make it a point to taste Estonian's popular dish Kringle, sweet bread knotted and sprinkled with nuts and raisins.