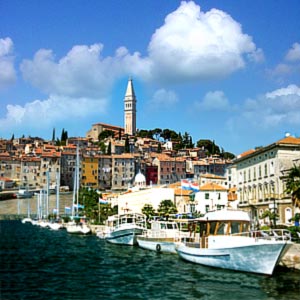 Croatia's stretch of the Adriatic coast is considered as one of the most beautiful destinations in Europe offering excellent beach and water adventure facilities. Visit cities that date back to the ninth century and partake of gastronomical delights.

Named by the National Geographic Adventure Magazine as the 'Destination of the Year in 2006', Croatia is the land of sun and sea surrounded by lush Mediterranean foliage. Croatia's stretch of the Adriatic coast is considered as one of the most beautiful destinations in Europe. Find out the best of the Croatia beaches. The pretty Venetian old towns with terracotta roof tiles, the rugged mountain ranges and the pungent Adriatic seafood make for an exciting Croatia holiday.

Croatian coasts are most often pebbly and rocky and yet some wonderful sandy beaches can also be found. Croatia Adriatic is one of the cleanest Mediterranean Sea. The jade green and cobalt colors of the deep waters are truly spectacular. The color of the Adriatic Sea is sometimes dark blue and sometimes greenish blue depending upon the time of the day and the angle of the sun's rays.

Naturists can be found along the Adriatic coast from Savudrija to Dubrovnik enjoying the sun, water and air, eating healthy food and indulging in sports living with nature. Many of the regular beaches also have a naturalist section and a tourist can sure spot a naturalist beach in the vicinity. Some naturalist destinations are Valalta, Rovinj, Koversada, Vrsar, Ulika, Cervar Porat and they sport the symbol of protected environment the 'blue flag'.

Croatian Adriatic is perfect for swimming as it is warm and calm and the sea is exceptionally clear and clean in this part of the world. Official beaches have designated areas for swimming. Usually there are no strong currents in the Adriatic and tides are low with high waves rare.

Fishing is permitted in Croatia with a license. The whole Adriatic Sea is open for fishing although special limitations are applied in aquatoria of National parts such as Kornati, Brijuni, Krka, Mljet and other smaller locations.

Tourists can discover the fantastic caves and holes in Karstic area in Croatia. Underground spaces are protected with geomorphologic monuments such as Modra Milja, Cerovac caves, Furious Furnace and Veternica near Zagreb and many others. It is interesting to see that Speleo diving is gaining popularity in Croatia and many speleological sites reveal their links with other underground channels.

Split is the second largest city in Croatia and it is the largest city on the Adriatic Coast. It is the main city of Dalmatia. The most important sight in Split is Diocletian's palace. The main open space of the palace in Peristyled and is surrounded by a colonnade of six columns to the eastern and western sides. In the center stands an arch with decorated garlands. On the eastern side of the Peristyle is a cathedral and on the western side is the People's square 'Narodni tra' with the old town hall built in the fifteenth century.

Split is well connected by air from Zagreb through a host of airline services including Croatia airlines, British airways, Easy jet and Wizz Air flights from London. There are several trains a day from Zagreb to Split. Numerous ferries connect Split to nearby Adriatic islands and there are several coastal ferries between the city and Rijeka to the north and Dubrovnik to the south. There are also several buses from Zagreb and elsewhere in Croatia to Split.

Croatia is a haven for gastronomes and sun worshippers alike. It is best to visit Croatia between April and September. The cultural season is in full swing around this time in Croatia and Zagreb should offer a comfortable stay for its guests from world wide.