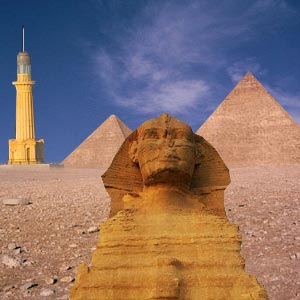 Pyramids, wonderful temples, religious monuments, natural desert treks, scuba diving, golf, fishing and birding expeditions and cruises across the Nile – Egypt holidays are made of these! Get the lowdown on Egypt weather and Egypt shopping.

No country on earth boasts a longer recorded history than Egypt, the eternal 'gift of the Nile' said Herodotus the renowned historian. Ancient Egyptian civilization has the world's most ancient and important monuments like the Giza pyramids, Karnak Temple, Valley of the Kings, Great Sphinx of Giza, the city of Luxor that contains a number of ancient artifacts are all found in Egypt. Egypt is widely regarded as the main political and cultural center for the Arab and Middle east regions. Map of Egypt

Egypt is a Middle Eastern country in North Africa. While the country is geographically situated in Africa, the Sinai Peninsula, which is east of the Suez canal, is a land bridge to the Asian continent. Egypt is bordered by Libya on the west, Sudan on the south, Israel and Gaza Strip on the northeast and Mediterranean and Red seas on the north and east respectively.

Egypt is the fifteenth most populous country in the world. The vast majority of the people live on the banks of the famous river Nile, where the only arable agricultural land is found. Urban life is concentrated in greater Cairo, which is the largest city of Africa and in Middle East and Alexandria.

In Egypt, summers are hot and dry in most of the country. It is normally humid in the Delta along the Mediterranean coast. Even the city of Cairo swelters in the heat. Winters are mild with some rain. The days are bright and sunny and nights are cold. Between March and mid-May, dust storms occur sporadically for nearly about 50 days. There is a short spring and autumn.

Hats and head covers: Tourists are advised to use hats with large brims and head coverings that help provide a certain amount of shade to contend with the sun and heat in Egypt. Scarves and other apparel can be taken along to cover the shoulders and arms which are important for visiting religious sites.

Sun Block: Always carry a sun block. Some tourists suffer serious sunburns after a days worth of sight seeing. Sunglasses will protect the tourist from the blaring, sand and desert landscape. A sunglass with the highest UV rating is advised.

Clothing: Egypt is a conservative country. No topless or nude bathing is permitted. Clothing made of materials that breathe like cotton is advised. Synthetic materials are not prudent for Egyptian weather. Tourists are advised loose and flowing garments. It is essential to protect the head and neck from loss of moisture and heat stroke.

The pyramids located at Giza Egypt were built from 2700 to 2500 BC. They are the oldest surviving Egyptian pyramids and only surviving member of the ancient wonders. There are 10 pyramids at Giza. The first three are held in high regard and very popular with tourists to Egypt. The first and largest pyramid was erected for the Pharaoh Khufu.

It is known as Great pyramid and it rises above 450 feet and covers 13 acres. Records reveal that it took 100,000 laborers and 20 years to build this mammoth Khufu pyramid. Historians and scholars are of the opinion that the pyramid shape was an important religious statement for the Egyptians, symbolizing the slanting rays of the sun. The sloping sides of the pyramid were intended to help the soul of the departed monarch to climb the sky and join the gods.

Called the 'Pearl of the Mediterranean', Alexandria is the second largest city in Egypt. The ambience and cultural heritage of Alexandria is unique and it distinguishes and distances it from the rest of the country. Alexandria has an atmosphere which is more Mediterranean than Middle Eastern. Alexandria was founded by Alexander the Great in 331 BC. It became the capital of the Greco Roman Empire. It housed the legendary light house that was one of the Seven Wonders of the World. From the 19 century, Alexandria became the focus of Egypt's maritime and commercial expansion.

Egypt's capital Cairo is the largest city in Africa and Middle East. This city has flourished as a center of learning, culture and commerce in ancient Egypt. Cairo lies in the center of all routes leading to and from the capitals of Asia, Africa and Europe. Cairo is a cosmopolitan city with Pharaonic, Christian and Islamic cultures. In Cairo city, the past and present meet, and invites the tourist to enjoy favorable weather throughout the year, visit immortal monuments and relics and the ancient pyramids in Giza.

Present day Cairo is described as the 'Hollywood of the East' what with over 100 motion pictures produced every year and a thriving media and arts industry. There are several international flights that fly directly to Cairo via European and Eastern cities. Plenty of package tours and chartered flights are also available to this famous city. The weather in this city is congenial and beautiful all around the year.

Suhag: This city is situated on the west bank of the Nile, about 12 km south east of Al-Ballyana. The city is famous for its cemeteries and tombs discovered in 1895 attributed to the kinds of the first two dynasties in Egypt. On any Egypt tour, the three cities of Suhag, Al Minya and Assyut combine the beauty of nature and ancient monuments from the Pharaonic, Roman and Byzantine, Coptic and Islamic periods.

Aswan: This is considered as the sunniest city of Egypt. This ancient frontier town has distinctively African atmosphere. It is graced by the most beautiful setting of the river Nile. The pace of life is slow and relaxing here with days spent on strolling up and down the cornice and watching the sail boats. There are plenty of floating restaurants here where one can eat freshly caught fish listening to the Nubian music.

The river Nile is at its most beautiful in Aswan. It flows through the amber desert and granite rock round emerald islands covered with palm groves and tropical trees and plants. The market here is full of spices, perfumes, scarves and baskets. Sunsets are spectacular here.

Sinai: Geographically located between Asia and Africa, Sinai Peninsula has been an important junction and a gateway to Egypt since the dawn of history. The history of Sinai goes back to the days of the Pharaohs who explored Sinai for its gold, copper and turquoise. The palm-shaded sandy beaches stretch across the Mediterranean shore to its north.

The Red Sea: The Red Sea with clear blue waters and enchanting beaches must be included in any Egypt holiday itinerary. Inspired by its mineral rich red mountain ranges, the mariners of antiquity named it as Red Sea or Mare Rostrum. Being 1930 km long, the Red Sea is bordered by Egypt, Jordan, Israel, Saudi Arabia, Sudan, Ethiopia, Yemen and Mount Sinai.

The Red Sea is dotted by coral reefs, fringed ancient ports, teeming underwater marine life and a maritime history that stretches back to the Pharaonic times. Today the ancient ports of the Red Sea are well-known for diving and fishing resorts. Sunbathers relax in the white sandy beaches, or find shade in the mangrove lagoons that line the coast of the Sea.

The ancient Egyptians believed that mummifying a person's body after death was essential to ensure a safe passage to the after life. Egyptian mummies are the most famous although mummies have been found in many other places throughout the world from China to South America. In Egypt, the best preserved mummies are those of the pharoahs and their relatives.

Over the years, thousand of mummies have been plundered by robbers, destroyed during Middle Ages, and some burnt for fuel, or to make paper out of the bandages. Several mummies have been ground into powders to make supposedly magical potions. The three most famous Egyptian mummies are Tutankhamen, Seti I and Rameses the Great.

Nile cruise can be a wonderful experience. Historically, the Nile cruise was the only way to visit the temples and tombs located along the stretch of the river. It is still a popular means of visiting Upper Egypt and has many advantages to other means of travel. Nile cruises may vary considerably but typical Nile cruises last for three, four or seven nights.

While the shorter tours usually operate between Luxor and Aswan, the longer Nile cruises travel further north to Dendera and other remote locations. An adventurous version of Nile cruise is Egypt's traditional sail boats called Falucca. The accommodations on a falucca are primitive. Tourists can sleep in the open on deck. The sailors of these boats normally double as cooks.

Egypt includes parts of the Sahara Desert and the Libyan Desert. These deserts are referred to as the 'red land' in ancient Egypt. They protected the Kingdom of Pharaohs from western threats. The Egyptians deserts stretch from the Atlantic coast in the west to the Central Asia in the east.

The oasis of Egypt are refuges from the modern world, pockets of civilization in a dramatic desert settings surrounded by the sand and the sky and giving a sense of timelessness that is rare to find today. The majesty of the Egyptian deserts can be explored by the desert safaris with the tourist spending a night under the starts and taking a morning dip in the hot springs.

The Corniche is lined with beaches. The Stanley beach is in town and further east is the Montazah beach and the Ma'amoura which are the two best beaches in Egypt. The Agami and Honnoville resorts to the west of Corniche are also popular with tourists.

Egypt is famous for several of its museums. The Fine Arts Museum has a collection ranging from drawings of rural life to Surrealist paintings. The Alexandrian Bienniale showcases art from Mediterranean countries. The Cavafy's apartment has also been recreated as a museum and it is located on the top floor of the Greek Consulate. The Royal Museum in Glym has a collection of magnificent jewelry, statues and paintings. The Hydrobiological Institute and Museum near Fort Quitbey has a rare collection of fish and marine life.

Montazah is the foremost city pleasure grounds with acres of formal gardens and a beautiful beach. Montazah palace is a grand structure built in a mixture of Turkish and Florentine styles. It is now a state guesthouse. Pleasant afternoons can be spent in the Shallalat Gardens with its rockeries and artificial pools, Nouzha gardens near the Alexandria zoo and the Antonia dis gardens where the classical sanctuary is set. This was once the private grounds of a Greek family.

Egypt is a wonderland of shopping opportunities. There are the famous bazaars such as Khan-el-Khalini. There are thousands of unusual stores scattered all about the country especially in Cairo which provides huge variety of everything from antiques to fine clothing and jewelry.

Egypt is certainly a prime location that boasts of a great heritage. Ancient world delights such as the pyramids, wonderful temples, religious monuments, natural desert treks, scuba diving, golf, fishing and birding expeditions and cruises across the Nile on a luxurious river boat ... the wondrous Egyptian Red Sea and the Sinai coasts, the high culture of Cairo and Alexandria, the possibilities are endless. Simply put, Egypt is a tourist delight that cannot be missed for the whole world.