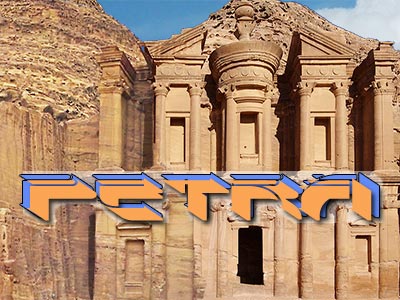 'Petra' in Greek means 'rock'; half-built and half-carved city famous for archeological wonders and inhabited since prehistoric times. It is referred to as Al-Batra in Arabic. Described as a 'rose-red city half as old as time', in a Prize winning sonnet by John William Burgon, UNESCO has described Petra as 'one of the most precious cultural properties of man's cultural heritage'.

Petra city is the capital of the Nabataean Arabs and is situated between the Red and the Dead seas. Petra was an important cross road between Arabia, Egypt and Syria-Phoenicia. It is located 240 km south of the capital Amman and 120 km north of the Red Sea of Aqapa.

In 1985 the Petra Archeological Park was declared a UNESCO World Heritage Site. In 2007, it was named as one of the Seven Wonders of the World.

With its 800 individual monuments including buildings, tombs, baths, funerary halls, temples, arched gateways and colonnaded streets all carved from the kaleidoscopic sandstone, Petra is popular with tourists.

It is not known when precisely Petra was built, but records show that the city prospered under the Nabataean Empire in the 1st century BC. It grew rich through trade in myrrh, spices and frankincense.

Pliny the Elder and other historians identify Petra as the capital of the Nabataeans and also the center of their caravan trade. Petra served as a major commercial route from Gaza in the west to Damascus in the north and the Red Sea and the Persian Gulf.

In the 4th century AD, Petra was annexed to the Roman Empire. It continued to thrive till most of it was destroyed by an earthquake in 363 AD. And by the 7th century much of Petra seems to have been deserted and lost.

Johannes Burckhardt, a Swiss explorer can be credited with rediscovering Petra in 1812 during his explorations disguised as an Arab. It was after this that Petra fascinated the West as a beautiful ancient city.

City of the dead

In all, Petra shelters around 800 carved tombs. Known as the rose-red city, Petra sports the wonderful color of sandstone from which many of the city's structures are carved.

Just like the pyramids in Egypt, in Petra, the Nabataeans buried their dead in intricate tombs that were cut out of the mountain sides. The city has temples, theater, and a colonnaded street and churches, due to the Roman and Byzantine influences.

Not just the magnificent remains of the Nabataean city, but also human settlement and land used for over ten thousand years can be traced to Petra.

It was on 6 December 1985 that Petra was designated a World Heritage Site and chosen by the Smithsonian Magazine as one of the 28 places to visit before you die.

The fusion of Hellenistic architectural facades and traditional Nabataean rock-cut temple and tombs represents a unique artistic achievement. The result is outstanding architectural ensemble of the first century BC to AD. The extensive channels and dams are of academic interest to archaeologists. Other sites include the Chalcolithic mining sites, the Iron Age settlement on Umm al Biyara and the remains of the Neolithic settlement in Beidha. History lovers would enjoy peering around the royal tombs in Petra and the Deir. The copper mines of Umm al Amad and the underground galleries are examples of the mining structures dating from the 4th millennium BC. Petra is of considerable universal value and its temple and tombs bear testimony to this.

Petra for the Tourist

Al-Khaznehis or the Treasury is one of the best known of monuments at Petra, near the Siq. The faÃ§ade is carved out of sandstone cliff wall, about 43m high and 30m wide. It is remarkably well preserved. It is a large square room carved out of the rock of the cliff whose corners and walls have been squared off meticulously. The interior is plain as the exterior is intricate. Kazneh means treasure and this is not a temple but simply a tomb.

This must have been built sometime between 1st century BC and 2nd century AC. The decoration at the treasury is inspired by Greek, Egyptian and Assyrian architecture. The sculptures are stunning and probably never to be seen in any other part of the world.

Wadi Musa, which translates as Valley of Moses in Arabic, is a town located in the Aqaba Governorate in Southern Jordan. It is the nearest town to Petra and there are several hotels and restaurants here for tourists. This is an important Bedouin settlement about 2 kilometers from the main town. The village of Taybeh is situated 15 km from Wadi Musa and offers spectacular views. There is also a five-star hotel Taybet Zaman here. North of Wadi Musa is the Beida area that includes Little Petra and the Beida Neolithic site which is a fine campsite.

This is an outdoor theater of Greco-Roman architecture carved out of stone by the Nabataeans in 60 AD. It can seat as many as 6000 patrons within the 40 rows of its seats to view an acoustically effective orchestra spanning 40 meters in diameter area. Similar to the Roman amphitheater, the upstage portion shows a tunneled backdrop offering 3 traditional entrances to the 4 foot high stage.

Visitors entered this ancient trading city through a natural winding rocky plat from the Eastern side â€“ the Siq. The walls of the entrance sport many votive niches indicating the sacred value it was given. This masterpiece of the lost city has fascinated visitors from the early 19th century.

Siq in Arabic translates as 'the shaft,' a deep natural geographical fault whose 'red walls' stand 600 feet high. It is believed that the tectonic forces produced these and over them it was worn smooth by water erosion. The conquering Romans later paved the floor of the canyon.

Adjacent to the Treasury are rows of intricately carved tombs in limestone walls. This is the 'Street of Facades' built by Nabataeans, said to have once bustling with markets and houses. The Street leads to the amphitheater, the cultural heart of Petra. In these modern days, you will find hordes of local souvenir and trinklet merchants.

The Royal Tombs overlook the amphitheater and are accessible via a stairway leading to the theater. The Royal Tombs are a complex of five tombs and carved into the western side of Khubtha Mountain and believed to the final resting place of a number of Nabataean kings.

The tall Urn tomb named after the small urn at the top is called the bedouin al-Mahkamah (court of justice). Famous for its colonnaded courtyard, many scholars consider this to be the final resting place of King Aretas IV or King Malichus II. In 446 AD the tomb's main chamber was transformed into a Byzantine cathedral and the vaults of this can be seen below the tomb.

The Silk Tomb is dramatically colored in Petra and its name comes from the rose red color of the sandstone in which it is hewn. On the eroded Corinthian Tomb, one can see in miniature the Khazne or treasury carved in capitals atop its columns.

The Palace Tomb is different in that it has a three-storey structure and is constructed of stone and not limestone. The tomb looks much like a Roman palace. This can be compared to the Golden House of Nero in Rome with a 50 meter stage that leads to this structure.

The Sextius Florentinus Tomb is the resting place of the Roman Governor of the province of Arabia between 126 - 130 AD.

The High Place of Sacrifice

Jabal al-Madhbah or the High Place of Sacrifice sits atop one of the mountains of Petra. This can be reached by a 30-minute rock stair climb concluding at the Attuf Ridge â€“ best known for two obelisks, a tribute to Nabataean deities. A massive square altar comprising circular insets carved out of the stone and serviced by a cut canal for drainage is seen. Visitors can enjoy spectacular views of sunny day reflections off the Tomb of Aaron and the descent is punctuated with various tombs carved in the downward path.

A complex of temples including that of the Winged Lions and Qasr al-Bint rests not far from the Colonnaded Streets. These temples are worn and withered with inscribed characters bearing tributes to the various Nabataean goddesses. The only freestanding building in Petra that has survived the ravages of time, floods and earthquakes is the Qasr al-Bint.

Perhaps the largest faÃ§ade in Petra, the Monastery Al-Deir is carved from the mountainside in the mid first century AD. Giving the Treasury a run for its money, this most impressive monument in Petra is an extremely important site for pilgrimage. It is an hour's climb north of Petra city center. Referred to as church or hermitage during the Byzantine period, this monument was called 'Monastery'. This was probably a Nabatean temple of yore.

There is a steep path on the left side of the faÃ§ade that tourists are prohibited to climb, both for the safety of the monument and the visitors. It leads up to the urn on top of the faÃ§ade. A cave located directly opposite to the Monastery houses a small cafÃ© offering refreshments and a shaded place to sit and admire the monument. A stone circle and a cave are other monuments in the vicinity and marvelous views can be had within a few minutes climb up the rocks.

This small museum demonstrates a modest collection of sculptural artifacts, jewelry and pottery found at Petra. Flying to Amman and renting a car from here will take a visitor to Petra after a 4-hour drive. There is also an airport in Aqaba and one in Eliat Israel.

These are closer to Amman. The roads are good and Jordanians are very friendly, polite and they speak English. Local guides are available to take a discerning visitor around. Good guidebooks are also available. Group tours can be arranged although some might prefer solitude in quieter corners.

Here is a rose-red city as old as time. An ancient civilization that has carved evidence of its history deep into soft sandstone rocks jutting toward the soft blue Jordanian skies.

The eroded mountains, nubby domes and miles of sandy roads overwhelm the tourist. The valley is tinged pink by the setting sun in Wadi Musa, Jordan, which means Valley of Moses, thus establishing the connection to the biblical past.

It is estimated that as many as 30,000 people may have lived in Petra during the 1st century AD. Petra was popularized by Steven Spielberg's movie Indiana Jones and the Last Crusade. As the city is carved into stone, it has not toppled like many others built around the same time. This once thriving city with a hub on the caravan trade is standing open to the imposing blue skies. But many of the structures have been considerably weakened by the salt blowing in from the Dead Sea that crystallizes on the columns.

The best time to visit Petra would be during March - May or September to November. Other times it can be awfully hot. Arm yourself with comfortable walking shoes. Carry along a hat and sunglasses. Apply sunscreen before you set out every day.

Do not underestimate the amount of water you need. Carry along a packed lunch for your Petra day trip. The admission charges to the Petra site is about 90 JD or 130 USD. Typical organized trips to Petra include admission, food and beverages, restroom charges and choice of animal ride. The neighboring town of Wadi Musa boasts of many tourist accommodations.