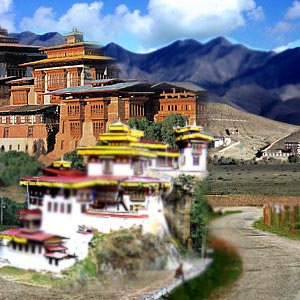 Nestled in the lap of the Himalayas; picturesque Bhutan is a quaint holiday destination. Bhutan is bound by a distinctive culture and lifestyle; from monasteries and crafts to carved wooden houses.

Nestled in the lap of the Himalayas; picturesque Bhutan is a quaint holiday destination. Named 'Bootan' by the great traveler Marco Polo, this country is fondly called as 'Druk Yul' by the local people meaning the land of the peaceful thunder dragon. Bhutan is popular worldwide as 'the Last Shangri-La' or 'the Last Place on the Roof of the World'.

Bhutan is bound by a distinctive culture and lifestyle; from monasteries and crafts to carved wooden houses. Bhutan is in no hurry to shift to the contemporary world and is thus holding on steadfast to its own unique culture. Bhutan is also a botanist's dreamland; being called ‘Southern Valley of Medicinal Herbs' among the flora enthusiasts. Check out more details on Bhutan travel.

Bhutan is a landlocked kingdom located in the heart of the Himalayas with a thin population. Bhutan has never been colonized and thus has retained its original culture and history. The men and women wear their national dress in public - the national dress for men being the Gho and for women the Kira. Gho is a lengthy robe that is tied on the waist and gathered above a belt, the pouch looks and functions like a pocket. Kira is worn till the ankles and is tied at waist level with a broad sash; this is secured on the shoulders with silver broaches.

Thimpu (Western Bhutan): Thimpu is the capital of Bhutan and lies on a hillside and is located in a sylvan valley that is situated on the banks of a river with the same name. Among the various interesting sites in this town, don't miss the fortress of the glorious region named as Trashi Chhoe Dzong and the Memorial Charten. These two sites are the old sites of Bhutan, many modern attractions in this town include the Changlimithang stadium, the weekend market, the National institute of traditional medicine, and the school of arts and crafts.

Paro (Western Bhutan): This beautiful town is located on the western part of Bhutan. Paro boasts of picturesque surroundings, historic buildings, woody villages and stunning landscapes. The most famous attractions include

The Rimpung Dzong or Paro Dzong located by the Paro River on a hillside.

The Ta Dzong which was earlier a watchtower Ta Dzong has now been converted into a National museum. This place also houses the famous Taktshang monastery.

Kyichu lyakhang is located 8kms from Paro and is considered as the holiest temple of Bhutan.

Taktsang is a pilgrimage place and is also known as the Tiger's nest.

Punaka (Western Bhutan): Punaka was the former capital of Bhutan. A drive to this place will bring you through the Dochu La pass offering a stunning view of the Himalayas. You will find a temple for fertility called the Chimi Lakhang on the way to Punaka. Punaka dzong is the major attraction in Punaka; it serves as the winter residence for monks who migrate from Thimpu every winter.

Bumthang (Central Bhutan): This place is the spiritual heartland of Bhutan. Almost all ancient and valued Buddhist sites are located here. Bumthang is home to a number of temples, palaces and dzongs. Interesting locales in this place include Wangdichholing palace, the residence of the previous king Ugyen Wangchuk, the temple of Jambey Lhakang, the sacred cave of Kurjey Lhakang, and the largest Bhutanese dzong, Jakar.

Trongsa (Central Bhutan): It is located in the center of Bhutan and is historically an important place as both the first hereditary Monarch King Ugyen Wangchuk and his successor King JigmeWangchuk ruled their country from Trongsa. Trongsa dzong is a beautiful fortress with a maze of temples, corridors, and offices. Trongsa is a beautiful town lined with wooden houses on either sides of the hilltop.

Phobjika (Eastern Bhutan): Nominated as a conservative area, Phobjika is a glacial valley and lies on the borders of the Black Mountain National Park. This Park houses the most important wild preserves of Bhutan, endangered species such as the black-necked cranes, barking deer, wild boars, Red foxes, Himalayan black bears, and leopards. Another place of interest is the Satkeng wildlife sanctuary.

Other interesting places in Eastern Bhutan include Mongar, Trashigang, and Lhuntse.

Drive along the picturesque mountain side: Don't miss the stretch between Sengor and Namning in east Bhutan. Enormous cascading waterfalls, recurrent fogs and seemingly endless turns make driving on this stretch an enlivening experience. The drive takes you through the citrus groves of Lingmithang and just after an hour drive you will be in the midst of pine forests, dropping through 6,562 feet of ice and snow.

Trekking: Late-September to late-November is the ideal time to trek in Bhutan, the skies are mostly clear and the temperature is just right. March- may is also a great time for trekking in Bhutan.

Mountain biking: There are numerous natural biking trails in Bhutan that every visitor would love to explore.

Bhutanese love to eat rice, meat, dairy and vegetables. Bhutanese prefer to eat rice that is a little nutty with a red tinge. Emadatse made from green chilies and cheese stew is the National dish of Bhutan and suja (salted butter tea) is served on all occasions. Momos (dumplings) and thupka (noodles) are also very common and popular dishes of the Bhutanese. Doma or beetle nut is offered to all the guests.

Bhutan has only two entry points - for air travelers at Paro and for road travelers at Phuntsholing (Lies on the southern border with India). Druk air the national airline of Bhutan, is the only carrier that serves in an out of Bhutan. Tickets are issued by the airline only if the visa for the visitor is cleared. Except for Indians, all other nationals require a visa to get into Bhutan. Bhutan is not reachable by train.

For travel within Bhutan, route permits issued by the immigration office in Thimpu is a must. Travel within Bhutan is mainly by roads but unpredictable landslides can disrupt road traffic pretty often. Another important aspect of travel in Bhutan is that no foreign nationals other than Indians can travel on their own in Bhutan. All visitors have to go through travel operators in Bhutan who are in turn controlled by the Bhutanese Government. Thus all rates and tariffs for travel and living of visitors are fixed by the Government of Bhutan.

Climate in Bhutan varies from region to region. It is tropical climate in the southern plains; it is hot in the summers and cool in the winters in the central valleys. In the Himalayan region summers are cool and winters are very cold.