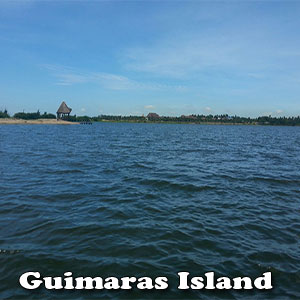 Guimaras is an island province of the Philippines which is still an undiscovered tourist paradise. A trip to Guimaras offers pristine beaches, historical structures and unspoiled natural beauty.

Favored by both foreign and domestic tourists and famous as the 'Mango country', Guimaras is located in the Panay Gulf, between Panay and Negros, with Iloilo province on the northwest and Negros Occidental on the southeast. Guimaras has about 8000 hectares of mango orchards where some 50000 mango trees are planted and managed by corporations and individual growers.

They produce the best mango variety certified as pest-free by the US Department of Agriculture. Interestingly, Guimaras mangoes are served at the White House and Buckingham Palace. And the Mango Festival 'Manggahan Festival' remains the largest event of the year in Guimaras. Dried mango jam and other delicacies are prepared from the variety of mangoes produced here.

Formerly known as Himal-us, Guimaras became an independent province in 1992 and has been hailed as the 'island to watch' due to unspoiled natural beauty potential. The province is basically agrarian with coconut, mango, vegetables, livestock, poultry and fishing as major products and major industries include tourism, fruit processing, coconut processing, fish farming, handicrafts making, mining, quarrying and lime production.

Situated in the Philippines and located in the Western Visayas region, Guimaras is the youngest and smallest of the six component provinces with Jordan as its capital. The province primarily consists of Guimaras Island, Inampulugan, Guiwanon, Panobolon, Natunga, and Nadulao. Geologists conclude that the island was formed as one landmass with Panay. With its azure waters and white sand beaches, Guimaras is special for its serenity and laidback lifestyle.

Tourists coming in from Manila can take a direct flight to Iloilo â€“ the gateway to Guimaras. The fastest route to reach this province is by a 10 minute pump boat ride from Iloilo city. The pump boat ride should take you to Jordan Wharf, the main port of entry into the Island province. The weather is dry from November to April and it tends to be wet and rainy from May to October.

Among the well-known beaches of Guimaras, Alibuhud beach is the jump off point for island hopping. Lawi, Jordan and Baras Beach offer a host of activities including boating, bird watching, beach volleyball, trekking and wind surfing on its glimmering waters. Natago Beach has interesting rock formations and a mansion nestled on its cliff. Villa Igang Beach Resort is another beach that is popular with visitors.

Also known as the Grotto, with its serene surroundings and pigeons, the turquoise waters and nearby caves offer a cliff-dive. Macapo falls is ideal for swimming and communing with nature. Sad-sad-falls is clad by dense jungle. Roca Encantada beach with its Roca Encantada vacation house built in 1910 and with its stunning vista of lloila strait and a picturesque mansion in Buenavista are other tourist spots.

Isla Naburot with its stunning white beach is a good spot for snorkeling, fishing, island hopping and scuba diving with its cliff lined with chalets and bay cottages. As one of the best known resorts of Guimaras, this coral jewel set amid emerald waters is not only colorful but rich with marine life. This fantastic underwater world, adds to the unique beauty of Isla Naburot.

Found in Sinapsapan, Jordan, Guimaras, Isla Naburot has native-styled cottages made of wood, nipa and stones. This island is absolutely unspoiled by modern gadgets - no electric wires, telephone or television antennae â€“ and hence should be an ideal spot for lovers as a tranquil hideaway.

Surrounded with fine sand and corals, with an area of about 100,000 sq m, Isla Nagarao is a tropical islet. It is located on the southern tip of Guimaras between Panay and Negros Occidental. It offers a very unique Visayas setting. The atmosphere is private and relaxed; suitable for a private holiday and there are several native cottages with modern amenities and restaurants here.

The Guisi lighthouse is an 18th century Spanish lighthouse built by the Spanish Government in 1894-1896 beside the beach. Faro de Punta Luzaran or the Guising Lighthouse is nestled on top of a cliff. Remnants of this old century lighthouse still offer a magnificent view from the top. The top of the lighthouse offers a perfect picture view of the Guisi beach, well worth the nominal fee paid to climb atop.

This must-see attraction in the Guimaras Island is a scenic experience, and the Guisi beach has a private beach house amidst its white sands and beautiful rock formations with natural springs along its shoreline. And just below the Guisi lighthouse, is the Guisi beach, with a trail down from the lighthouse for easier access to the beach.

Baras Cave is a small one with twin entrances. The river Palawan runs underground and inside the cave there are different stalagmites and stalactites and bats hanging from the cave ceiling.

The Trappist Monastery built in 1972 is located in Brgy, San Miguel and about 15 minutes away from Poblacion, Nueva Valencia. The monks abide by St Benedict rules and thrive on agriculture. The monastery sells interesting goodies including all kinds of jams from natural fruits like mango, pineapple, guava jelly, otap and biscocho to Pulvoron, mango candy and many more.

Balaan-Bukid (Holy Mountain) is a shrine close to Jordan. On the trail to the summit, there are 14 Stations of the Cross. A rough steep road leads to Mt Tapyas in Coron Town. Balaan-Bukid is the place where Catholics go during Lenten Season to commemorate the agony and crucifixion of Jesus Christ (Pagtaltal).

Murals of the Cross can be seen at each station as one travels towards the summit. A stony steep path takes the visitor to the Cross. The view of the summit is panoramic and a chapel for Ave Maria Purisima, marked by a gigantic Cross sits atop. The Jordan port could also be viewed from the summit.

The Jordan's plaza, has earned the title of smallest plaza in the Guinness Book of World Records, at least the smallest one in Philippines now. Featured in the Plaza is the small statue of Dr Jose Rizal, the national hero.

Many visitors embark on island hopping while at Guimaras. It is indeed interesting to look around at the picturesque islands and swim in the last beach stop for a couple of hours. The island hopping tour would be around six different islands. Alibuhud Beach is the usual jump-off point for island hopping. The first stop would be the Pawikan Sanctuary.

The Ave Maria Island in Sitio Lusay, Jordan is the next. Labi-labi Springs in Daragan, Buenavista is amazing. The Orang, the Tarug and the Panaluron Falls are worth a watch. The adventure tourists would enjoy their adrenaline jump in the Guimaras Adventure Park. From rappelling and paintball to target shooting and horseback riding, it is adventure all around.

Boat rates vary between resorts but common rates would be P400 for 1 hour for 6 persons and P150 every succeeding hour. There are stops for snorkeling, swimming and photo shoots during island hopping.