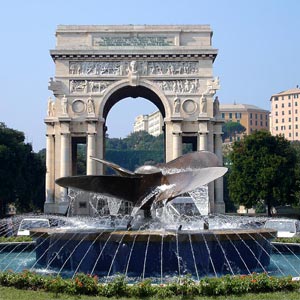 Genoa is the capital region of Liguria and lies in the gulf of Genoa 'Golfo di Genova', the northern bay of the Ligurian Sea on the northwest coast of Italy, not far from the French border. Genoa is a city of architectural and cultural treasures. It is Italy's most powerful commercial seaport.

Genoa is a vertical city and the sky feels so close that a tourist can feel sometimes dizzy. A tour of Genoa promises an experience of dense and fascinating medieval narrow alleyways, Romanesque and Baroque churches, aristocratic castles and sculpted monuments. Check this informative Genoa travel guide.

You can take a flight to Cristoforo Colombo airport to embark on your Genoa tour. With frequent connections from major Italian cities, you can take a convenient train to Genoa. Ferries from most Mediterranean ports are yet another wonderful way to explore Genoa. Genoa shares a secret beauty which can be found in its daring architecture, splendid frescoes and imposing monuments standing austere witness to the baroque architecture.

Try out the trattorias, restaurants and lounge bars around the Piazza De Ferraris. You can spend an evening out near the Porto Antico enjoying a movie, nightclub or shopping. Catch some live music at the Jazz Clubs or a wonderful theater experience at Teatro Carlo Felice.

It is surprising to note that sea food is not the hot favorite with Genoese despite its location on the sea. Genoese prefer simple and delicious food like traditional breads, Focaccia and the Farinata. Focaccia is a delicious flatbread stuffed with cheese or topped with an array of vegetables and herbs. Pure olive oil is used for baking.

Farinata is a lightly fried specialty made from chickpea flour. This is often stuffed with spinach and ricotta and served plain or topped with walnut sauce. Traditional bread is pissalandrea named after Admiral Andrea Doria. Pesto is the favorite basil sauce made with a mixture of basil, pecorino and parmigiano cheese, garlic, olive oil and pine nuts, ladled over pasta, tossed into salads and mixed into soups.

This should take about two hours for the tourist to explore the old town center and its many attractions. This is normally a guided tour and starts with Piazza Matteotti located in front of the fascinating and utterly beautiful facade of the Duchy palace. The maze of streets in the historic center is sure to captivate a visitor.

The baroque Chiesa del Gesu and the Opera house Carlo Felice can be found enroute. The narrow medieval alleys, the beautiful historical building and the squares of this largest old town center in Europe leads the tourist to Christopher Columbus' house in Piazza Dante and the majestic cathedral of San Lorenzo. This tour ends in old port area which is a rare combination of modern and industrial archeology and urban restoration designed by Renzo Piano in 1992.