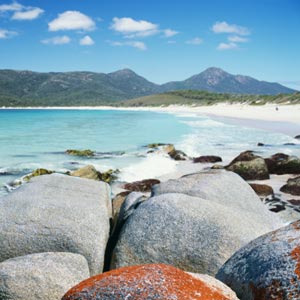 Pleasant and temperate climate with warm people and exotic food and wine make Tasmania the right place for a relaxed island vacation. Read more about a holiday in Tasmania Australia.

An hour's flight or overnight cruise from Melbourne takes you to Tasmania in Australia - a wonderful blend of cultural heritage, breathtaking wilderness, fine wines and more.

Tasmania, a state in Australia is located 200 kilometers south of the eastern side of the continent. The 240 km stretch of Bass Strait separates Tasmania from mainland of Australia. The state of Tasmania is formed by the island of Tasmania and many more neighboring islands. This place is filled with tall forests, gleaming highland lakes, rocky mountains and spectacular coastline.

Tasmania is home to few of the rarest species of plants and animals. Tasmania is surrounded by Bass Strait, the Tasman Sea and the Southern ocean thus blowing fresh air into the land. Little wonder that Tasmania is said to have the purest air in the world.

About one third of the island of Tasmania is protected as natural parks and reserves. There are about 17 reachable national parks. The Tasmanian world heritage site has the World's last great temperate wilderness and includes the Southwest National park, Franklin-Gordon wild rivers National park, and Cradle mountain-St Clair national park.

Guns plains caves: Located in the Cradle mountain area, these spectacular lime stone caves are easily accessible and there are guided tours to this place. Warm clothing and comfortable walking shoes are a must to visit this place.

The Tasmanian Arboretum: This site is spread over an area of 66 hectares and exhibits an astounding wealth of Tasmania's prevalent and unusual trees.

Cradle Mountain: This is the northern end of Wild Cradle Mt-Lake St National Park. The mountain is a rough, dolerite peak that overlooks the entire area.

Freycinet national park: Freycinet peninsula is located on the east coast of Tasmania and rises as a projection from the sea. This peninsula as a whole bears a jagged and stunning look. The peak is made of granite. Varied species of flora and fauna serve as an added attraction at this place.

Heritage sites: Tasmania has numerous heritage sites as it was the second oldest settlement in Australia. Carvings, hand-prints in blood, charcoal, and ochre made 10,000 years ago during the ice age are still seen on the walls of these caves. Places such as Bedlam walls, Wybalenna, Henty Dunes, Rocky Cape and Tiagarra Aboriginal Centre speak the language of heritage. Stately homes and Georgian civic buildings in Tasmania are remnants of the historical past of this place.

Brewery tours: Tasmania is famous for its breweries and in particular its wine, a trip to the local breweries is a great experience.

Launceston's attractive Victorian streetscapes, watching the Tarmar valley from Brady's bush ranging lair, and lazing on stone's of the Salamanca warehouse is a treat for every visitor. Explore Hobart and the surrounding towns of Richmond and Kettering. Take in a harbor cruise and unwind in this blend of heritage and scenery. Visit the Launceston and Tamar Valley to sample fine food and wine and enjoy the scenery. Take a boardwalk stroll over the wetlands at Tamar Island. You can go on the Tamar Valley Wine route.

Tasmania is served by two major airports - Hobart international airport and Launceston airport as well as two small airports, Burnie and Devonport. A choice of accommodation is available in Tasmania; from historic hotels and self contained apartments to hostels and bed and breakfast facilities. Food in the early days in Tasmania bore English influence but with tourists and immigrants flocking in, Tasmanian restaurants have started serving a variety of cuisine.

Tasmania has four distinct seasons, summer, winter, autumn and spring. The climate in Tasmania is highly unpredictable with variation in temperature and wind speed being noticed within the same week. The best time to travel to Tasmania is between January and February.