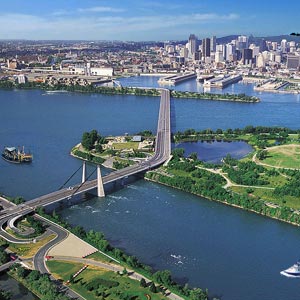 Travel to Quebec to savor this city steeped in tradition and history. From museums and heritage sites, a vacation to Quebec is sure to enthrall tourists.

Quebec City also familiar as Ville De Quebec is the only North American city that still has its original city walls as its periphery. A land steeped in tradition and history, Quebec was a French colony and has re-constructed itself by embracing the deep-rooted bondage to the French history, traditions and way of life. Travel to Quebec acquaints you with this fascinating city that is an amalgam of the old and the new.

Quebec is the second largest province in Canada after Ontario and is the second largest in population too. Quebec is located in the east of Canada, the capital of Quebec is Quebec City and the largest city in Quebec is Montreal. Assortments of sceneries, vegetation, climatic regions, present numerous tourist appeal spots, getaways and routes in Quebec. Quebec has more than 10000 lakes, 22 natural parks, 14 wildlife preserves, 6000 km of coastline and natural splendors for the tired visitor to rejuvenate himself.

Just forty years after Columbus discovered America, Jacques Cartier helped the French take over Quebec and held on for nearly five centuries thus leaving back a rich and strong French connection. Large fractions of the local population are French speaking and thus the official language of Quebec is French followed by English.

Apart from the two cities of Montreal and Quebec City, there are various other attractions in Quebec that attract tourists from all over the world to this ethnically and traditionally significant place.

Heritage sites: Quebec is a city of heritage and culture, with about five centuries of European presence predominantly evident at these sites.

Quebec City churches and buildings: There are numerous churches in Quebec that have been included in the list of historic monuments such as the Notre-Dame Basilica, St. Patrick's Basilica, Mary queen of the world Cathedral in Montreal and Notre-Dame-de-Quebec Basilica in Quebec city. Saint-Anne-de-Beaupre Basilica is worship place dating back to the 17th century and is a beautiful tourist spot too. Notre-Dame-du-Cap-sanctuary is another important and popular pilgrimage site. The buildings at bucolic lle d'Orleans are a great tribute to the city.

Museums of Quebec: Quebec boasts of about 400 museums and each of them holds deep significance with the culture and rich heritage of Quebec.

Gardens of Quebec: Montreal botanical garden is the largest of its kind in the world and covers about 185 acres of land, has 10 green houses, Chinese gardens and insectariums.

Cruises and boat tours of Quebec: Whale watching, enticing views of Saguenay River Fjord and cliffs on the rivers are incredible to watch. There are numerous islands too that can be visited while on a boat ride and of course there are short trips that can be made with the cruise lines to these small and enchanting islands.

Sport and open-air activity at Quebec: Quebec is a place filled with nature's bounty and thus offers a lot of outdoor activities and sports for the adventurous - cycling, fishing, hiking and trekking, camping, wild life observation tours, skiing and boarding, dog sledding, hunting, snowmobiling and golf.

Quebec exploration: Quebec has exclusive routes such as King's road dating back to the 18th century and connects Montreal to Quebec City. There are various other famous routes like New France route between Quebec City and Cap_Tourmente, whale route along the Cetacean's playground, navigator's route, wine route, agricultural tour, border route etc.

Seasonal hangout: Quebec is a wonderful place serving as a getaway for all seasons. Autumn is hot and warm and is ideal for leisurely walks in the orchards and vineyards. Winter is for various winter sporting activities, summer brings out the best of nature, cool forests and warm sun just the right time to relax. Spring is for the rafting lovers and the right time to enjoy the best from water activities.

All tourists other than Americans have to possess a valid passport to enter into Canada. Visa is not required for Americans, UK nationals and for nationals of few European countries. For others visa is mandatory.