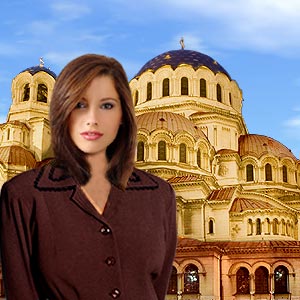 Bulgaria is an important historical country of Europe with wealth of art and architecture surrounded by a spectacular landscape with high mountains and a coastline of white sandy beaches. Bulgaria is also known as 'Land of roses' and is also the largest producer of rose oil in the world.

Bulgaria, situated in Eastern Europe on the Balkan Peninsula is fringed by River Danube to the north and the Black sea to the east. Bulgaria's origin dates back to 6th century and is considered as one of the ancient states of Europe. It is a small country with diverse landscape offering plenty of things to see and do during your Bulgaria vacation. Bulgaria enthralls tourists with sea resorts, mineral springs, spectacular mountain ranges, breathtakingly beautiful beaches as well as cultural and historical monuments.

Bulgaria offers wonderful nature tourism with important coastal locations on the Black Sea, where you can unwind yourself on its beaches. For cultural tourism, Sofia, the crown capital of Bulgaria enchants you with numerous archaeological, cultural and historical monuments. Bulgaria has nine architectural and artistic UNESCO-listed World Heritage Sites to its credit. Bulgaria is also known as 'Land of roses' with the valley of roses located in the center of the country and is also the largest producer of rose oil in the world.

Bulgaria is a fabulous country, has a lot to offer to the tourists with perfect places to relax and enjoy a great vacation.

Located in the Sofia Valley, the capital city lies at the foot of the Vitosha and Lyulin Mountains, and is the hub of the country's political, business and cultural life. It is a lively city overflowing with monuments, museums and exhibits. Despite being the capital of Bulgaria with modern urbane touch, Sofia city wears a laid back attitude and offer plenty of recreational activities at Mount Vitosha only add to the Sofian mood.

Alexander Nevsky Cathedral is the greatest sight of the present day city representing the central Patriarch's cathedral of the Bulgarian Orthodox Church. This building was constructed in the year1912 to honor the Russian soldiers who died fighting to liberate Bulgaria from Turkish rule. The cathedral has spectacular interiors with mosaics, stained glass windows, marble and woodcarvings.

St Sofia, an ancient eastern orthodox church is one of the finest representations of early Christian architecture in the Balkans. Locals believe that the church possesses the powers to protect the region from foreign invasions.

St George Rotunda church built in 4th century is the oldest building of Sofia. The St George Rotunda is known for its attractive architecture and medieval frescoes that were discovered under a covering of plaster. The church is presently converted into a museum and the dome of the church is protected by UNESCO.

Boyana Church: Located at the southwest of Sofia, is considered an important landmark of Bulgaria. Boyana is one of the nine Bulgarian cultural monuments included on the UNESCO list of World Heritage sites. The walls are covered with unique paintings depicting scenes from the Bible and the lives of the saints.

National Ethnographic Museum houses arts, crafts and national costumes of the country representing the lifestyle of the Bulgarian people from the 17th to the 20th century. It is also a popular cultural and educational center. A trip to the museum is certain to leave you with a rich experience.

National Archaeological Museum is housed in a former Ottoman mosque exhibiting the pieces of Thracian, Greek and Roman origin. The highlight of this place is the Vulchitrun Treasure, a collection of 13 decorated and strangely shaped vessels of solid gold.

Vitosha Mountain with the capital city at its foothills is the most frequented mountain and is popular for winter holiday activities like skiing, snow board and hiking in the summer. Vitosha National Park around Vitosha Mountain is home to many species of butterflies and offers shelter to wolves, bears and wild cats. Its high and beautiful peaks, thick woods, sufficient snow fall, well marked tracks makes it a lovely tourist destination.

Sofia Zoo in Bulgaria is home to various wildlife species along with many endangered species. Innumerable species of birds and animals make the Sofia Zoo a colorful tourist attraction.

Kazanluk is a small town famed for its Thracian Tomb decorated with exceptional murals representing the best of Thracian art. This tomb has been included in the UNESCO protected World Heritage Site list

Plovdiv, Bulgaria's second-largest city is popularly known as the museum town of Bulgaria. The charm of the city lies in the happy co-existence of old town with buildings dating from the 18th and 19th centuries and new commercial section. Plovdiv is the proud location for some of the finest art galleries, museums and historical houses.

The Archaeological Museum with collections of gold Thracian artifacts, including cooking utensils, and the Ethnographic Museum housing folk costumes and jewelry are some of the popular museums worth visiting. Churches of St Marina and St Constantine and Helen are considered to be the master pieces of Bulgarian architecture. Once in Plovdiv do not forget to visit Batchkovo Monastery housing rare frescoes, icons, manuscripts, gold Thracian objects and coins.

Rila Mountain, about 120 km from Sofia, is famous for the most impressive Bulgarian monastery, called Rila monastery (declared as UNESCO World Heritage site). It has a mesmerizing collection of murals, woodcarvings, old weapons and coins; and manuals and Bibles written on parchment. The monastery itself, with splendid architectural features will be of a great interest to the tourists. The royal Rila Mountain has the country's highest peak called Moussala and also contains the oldest and largest Borovet ski resort, a perfect place for outdoor enthusiasts.

Tourists flock to Black Sea coast to enjoy the picture-perfect white sand beaches, attractive resorts and captivating holiday villages. It is a perfect getaway for a family vacation as this place has ideal warm sea temperatures, a sunny climate and safe beaches. The coast also offers best spas in the country famous for mineral baths, mud treatments and thermal springs.

After stepping on to the Black Sea coast, do not miss visiting Varna, the third largest city of the country, popularly known as sea side capital of Bulgaria. The city is filled with soothing gardens, vineyards and groves and of course the beautiful strip of beaches. Just about 18 km north of the city lies the famous 'Golden sands' resort and and the Golden Sands National Park.

Veliko Turnovo an earlier capital of Bulgaria flaunts 19th century houses built in the National Revival style, magnificent palaces, monasteries, churches, fortifications and bridges. The section of the city has been declared as museum reserve and is a 'must-see' city for anyone spending holidays in Bulgaria.

Pirin National Park, a UNESCO World Heritage site stands on the scenic Pirin Mountain characterized by rugged alpine peaks and majestic landscape with waterfalls, caves and abundant lakes. It is one of the best preserved places of Bulgaria and an obvious tourist destination year round.

If you still have the appetite left for beaches, Burgas is the place to be. It is the province of the best beaches, and the jewel in the crown is a Sunny Beach along with other popular beaches like the Costa del Sol, Beach, Dyunai, and Elenite, as well as Sozopol. City is surrounded by the Burgas Lakes which are home to several hundred bird species. Burgas is also a home to some of the finest museums and art galleries and International Folklore Festival is celebrated with lot of enthusiasm.

These cities located in the southeast of the country, are other tourist destinations of Bulgaria. The beaches in Akhotopol with golden sands and tranquil waters attract highest number of tourists. The town of Balchik is famous for its Botanical garden and the Palace of the Romanian queen Maria.

Velingrad is one of the beautiful towns of Bulgaria blessed with more than 70 sources of mineral water, fortified with curative and preventive properties. Each source of the mineral waters differs in the mineral content and is said to cure different diseases. With suitable climatic conditions and wonderful mineral springs Velingrad ensures a great holiday for the travelers.

Bulgaria is well connected by air, water and land. Sofia, Varna and Burgas cities have the main airports in the country. These airports have bus servicea running from arrival terminals to the city center at frequent intervals. If you are opting for a water route, go to Burgas and Varna as they are the port cities of the country. There are excellent rail services between Sofia and Budapest, Belgrade, Bucharest, Thessaloniki and Istanbul.

Sofia is also directly connected with Paris, Vienna, Munich and Berlin. Taking the road is also convenient way of reaching the country. Main entry points include Koulata and Novo Selo (from Greece); Ruse, Kardom, Durankulak and Silistra (from Romania); Svilengrad and Kapitan Andrikeevo (from Turkey); Kalotina, Zlatarevo and Vrashkachuka (from Serbia) and Guyeshevo (Former Yugoslav Republic of Macedonia).

Bulgarian climate varies according to altitude. Most of the plains including Sofia enjoy moderate climate. The summer temperatures are most comfortable ranging between mid twenties and thirty degrees. The best months to visit are mid-June to September as the days are long and sunny. Winters are cold with considerable snowfall in the mountains and are normally avoided unless you are interested in skiing.

Bulgarians breathe music and it is a very important aspect of their culture. Apart from music people of Bulgaria appreciate, create and preserve unique paintings, drawings and sculptures.

One more interesting fact that all the tourists visiting Bulgaria should know is, a shake of the head means 'yes' and a nod means 'no'. Hence it is better to express verbally to avoid confusion.

Typical Bulgarian food is almost similar to European cuisine. Their specialties include:

You are sure to find bread on all Bulgarian family tables. You find small eateries and hotels on every corner street. The highlight of all the items is the 'Banista' a cheese pie which is savored on all special occasions. You get a good quality wine, both red and white, as it is a largest wine producer in the Europe.