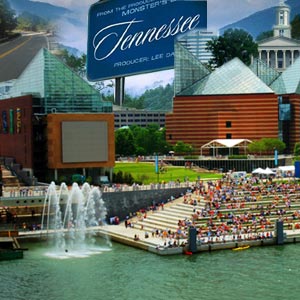 Tennessee vacation can be fun; with plenty of outdoor activities and serene climate and breathtaking untouched scenery. Read more on this land of country music and Elvis Presley.

Serene climate, calm atmosphere and nature at its makes Tennessee a great place for a vacation. Tennessee is home to great people like Elvis Presley - the King of Rock 'n' Roll, and Alvin York. The famous Bluegrass music has its origin in Tennessee. Tennessee enjoys tranquil and pleasant weather all through the year.

Summer is the best time to travel to Tennessee so as to enjoy numerous outdoor activities, spring blooms with wildflowers and dogwoods. Winter is calm with sporadic snowfall, autumn colors the trees filling them with bright and colorful leaves. Find out how to plan a Tennessee vacation.

Home to country music, Tennessee boasts of plenty of untouched landscape, from the prosperous black fields along the Mississippi to the Appalachian Mountains and its forests. Traces of country can be felt almost everywhere. Memphis came into being from cotton lands; Nashville rose to limelight because of country music. Tennessee is a perfect combination of the rural and the urban, few places like Pigeon Forge and Gatlinburg areas are more urbane when compared to other places of the State.

The local population of Tennessee earned their major revenue from farming and fields till about mid-1900. Tennessee gracefully accepted the industrial revolution and today this place is a major industrial hub. It is the music capital of the country and numerous singers in this field have showcased their talents at the Grand Ole Opry.

Tennessee is located in the southern part of United Sates; it was popular as the 'volunteer State' as volunteers from Tennessee played an important role in the 1812 war. The State of Tennessee is divided into three regions, the Eastern region, the Western region and the Middle region. Each of these regions has an exclusive mixture of natural features.

East Tennessee has many mountainous regions together with the Great Smoky Mountains. Middle Tennessee is made of small streams and gently sloping hills. West Tennessee is very distinctive geographically and is bounded by the Tennessee River on the east and the Mississippi River on the west. This region also comprises several small rivers and lakes.

Stax museum of American soul music, Memphis:The museum is spread over an area of 17,000 square feet and has more than 2000 display pieces. The display list includes art pieces and memorabilia commemorating the heritage of American soul music. Besides the stax sound, the museum also focuses on the music of Muscle shoals, Hi and Atlantic records.

International story telling center, Jonesborough: The people of this place rolled an old wagon into the courthouse square to share stories in the year 1973. The event named as the National Storytelling Festival was highly praised locally and all over the world. The place is a leading institution in the world that strives hard to improve the lives and work of people who are involved in the field of storytelling.

Dollywood, Pigeon Forge: A place filled with entertainment for all members of the family. It is an adventure park with numerous rides, traditional crafts, stunning shows and lots of fun. Every season witnesses a new festival.

Grand Ole Opry, Nashville: It is a one stop entertainment spot for people of all ages and the live country music on stage is fun to watch. The Grand Ole Opry is the longest aired live radio program in the world and has been on air every weekend since 1925.

Elvis Presley Boulevard, Graceland - Memphis: Home to the great singer, Elvis Presley, this place is kept just the way Elvis Presley used it. His grave is also in the same place and things that were used by him are kept on a display.

Sun Studio, Memphis: This studio is very popular throughout the world; this place is the origin for Rock 'n' Roll music. Guided tours are conducted here.

Knoxville Zoo: Open all through the year, this place is a treasure of natural spectacles and has over 800 animals. The animals in this zoo are left in their natural habitats like the Black bear falls, Grasslands Africa, Chimp ridge etc. Kids' Cove in the Zoo is exclusively for children.

Great smoky Mountain's National Park, Gatlinburg: This Park is an international biosphere reserve and has been declared as a World heritage site. The Park is spread over an area of 500,000 acres of land.

Jack Daniel Distillery, Lynchburg: This is one of the nation's oldest registered distillery, guided tours are conducted here.

The children's Museum of Memphis, Memphis: A whole new world for children, it is fully packed with enjoyment and innovation. Interactive displays, unique events and workshops are great fun and learning experiences for children.

Ripley's aquarium, Gatlinburg: This aquarium is filled with 1.4 million gallons of saline water and has 12-foot sharks in the world's longest tunnels. The place has more than 10,000 interesting sea creatures and educational shows too.

Rock city Gardens, Chattanooga: Rock City is a cluster of gardens over Lookout Mountain and presents a wonderful view of the city. On a clear day, all the seven States are visible from the Lookout Mountain.

Walnut Street Bridge, Chattanooga: It is the longest pedestrian bridge of the world and was the first bridge to connect Chattanooga's downtown with the north shore. The bridge was erected in the year 1890 and also presents a wonderful view of the Riverfront, Tennessee Park, and the Coolidge Park.

The New Madrid earthquake, the biggest earthquake in the history of America took place at Tennessee in the year 1811. Reel Foot Lake and Lake Counties were formed through this earthquake.

Tennessee has plenty of outdoor activities to offer its visitors. Hiking in this place can be great fun, there are lots of great trails present in various levels. Camping is very famous here, a place that offers picturesque backdrops to relax and have fun. Tennessee is served by four airports of which two are international airports; it is also well linked through rail and road services. Accommodation is also available aplenty ranging from bed and breakfast to camps to star hotels. The numerous multi-cuisine restaurants satisfy the taste buds of people from a cross-section of society and culture