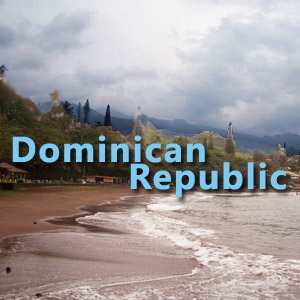 Lying in the same waters as Cuba and Puerto Rico, Dominican Republic takes up the eastern two thirds of the island it shares with Haiti. Palm fringed beaches, adventure sports, casinos, rich history and culture and above all, hospitable Dominican people make this country a prime vacation spot.

'There is no island that is more beautiful in the world' exclaimed Christopher Columbus, when he arrived on the Dominican Republic in 1492. A paradise to discover, Dominican Republic boasts of golden sandy beaches, crystal clear turquoise waters and mysterious lush valleys, whispering majestic tall mountains and above all, wonderful and friendly people.

Lying in the same waters as Cuba and Puerto Rico, Dominican Republic takes up the eastern two thirds of the island it shares with Haiti. A vacation to the Dominican Republic promises to be a mix of caves with lush interiors, with the lore of pirates and Victorian gingerbread houses, and a 900 miles coastline!

Vibrant coral reefs and brightly colored fish in the company of spiny lobsters wend their way through the peninsula's lush arroyos and playful waterfalls. Dominican parrots murmur to the melodic strains of the cicadas singing in the starlit nights and salsa sounds of Samana never fade away.

No wonder then the Samana peninsula is considered the prettiest part of the island of Hispaniola. A jewel in the crown of the Dominican Republic, Samana is sparsely populated, mountainous with resplendent tropical vegetation, truly magical in the tropical Caribbean!

A traveler to Samana is reminiscent of a bygone era as an old dirty road brings a wondrous sense of anticipation exploring a region that has shielded itself from the pressures of the modern day life.

Samana Bay is popular spot for whale watching which is an important tourist activity during the months of January, February and March. The humpback is one of the largest species of whale measuring 12-15 meters and weighing up to 60 tons. Although the name suggests humpbacks, the whale does not have a hunchback. It only looks as though they do when they jump out of the water with arched backs.

The region of Puerto Plata encompasses the prime waterfront property on the north shore of the Dominican Republic. These days, it is popularly known as Amber coast, due to the rich deposits of amber found here.

This is indeed the mass tourism capital of the Caribbean. Puerto Plata is a vibrant Dominican town worth exploring for its historic architecture, and nightlife. Around the original town sprawls a patchwork maze of swankiest neighborhood countries formed over past century.

History records that Columbus wanted to establish a city at Puerto Plata and name it La Isabela, but a tempest denied him the pleasure. It was in 1502 that Nicolas de Ovando founded Puerto Plata, which means 'port of silver' as the ships laden with treasures were taken from the New World as this port was the last stop for ships going back to Europe.

Puerto houses a number of less expensive, all inclusive resorts and an estimated 95% of visitors stay at all-inclusive Playa Dorada complex, which is a tourist zone containing 14 major hotels, a scattering secluded condominiums and villas, golf courses and riding stables.

In Puerto Plata, the waters are more turbulent, especially in the winter months; rainfall is sudden and does not last long. Landscape here is green, and beaches are not as wide.

Puerto Plata maintains an urbanized feel; with restaurants, bars, shops, and historic colonial era fort, and a walk along the ocean front promenade El Malecon. A lucky visitor can catch a glimpse of dolphins frolicking offshore or a humpback whale in winter.

Some of the best shopping centers of Dominican Republic for amber and larimar can be found in Puerto Plata. The cable cars in the town provide dramatic views of the north coast to the visitors.

Driving east from Puerto Plata and between its immediate neighbor Playa Dorada, a tourist can access a gorgeous beach, shopping mall, ancillary sporting venues, dance clubs, restaurants, and casinos and several other diversions. Some savvy visitors head to Playa Cofersi, about 5 km from Puerto to a newly expanded ocean world and the Sun Village. Islanders play golf in the beach on weekends, and enjoy giant house parties, eat, drink, picnic well into the night.

Palm fringed beaches, adventure sports, casinos, rich history and culture and above all, hospitable Dominican people make this country a prime vacation spot. Tourism is promoted by Europeans, North Americans and Latin Americans who visit this place year after year.

A great biodiversity can be observed in the Dominican Republic tourist destinations. The Barohana Pedemales areas are open for international nature connoisseurs. The East coast beach strip, the Bavaro and Punta Cana is the best choice for those seeking rest and relaxation. Punta is especially famous for honeymooners. The Boca Chica is for singles with the area preparing the high tech gurus with the Technology Institute of Las Americas.

Jarobacoa and Constanza are jewels in the crown of the Central Mountain Range and the tallest range in the Caribbean, sometimes referred to as the Dominican alps.

Juan Doila and its neighbor beach Guayacanes are for couples and family to enjoy a restful vacation. La Romana is an excellent choice for family holidays, honeymoons, reunions and for scuba divers and golfers. Playa Grande is again for the serious golfer and it is the best in Dominican Republic for golfing. Golfers call this a pebble beach of the Caribbean. Santo Domingo is the oldest city in the New World where settlement of all Americans began. The first cathedral, first hospital can be found here. Sosua is for bargain hunters and explorers. With active and hopping night life, Sosua is ideal for excursions.

Birds and animals in Dominican Republic

The rhinoceros iguana which is an endangered species endemic to Hispaniola can be found in the dry, rocky grounds with cacti, thorny bushes in the Enriquillo Bay. There are about four types of turtles living off the Dominican coast including the sea green turtle with a glutinous yellow substance.

The American crocodile is present in this New World. In Hispaniola, American turtle is so well established that it represents one of the largest wildlife crocodile populations in the world. The solenodon is an insectivore not dissimilar to rat but aesthetically pleasing. The hutia is another small rodent living in the caves and tree trunks of the Republic.

The West Indian manatee is another endangered marine animal. It can be seen in the coastal areas of the national parks or in Samana Bay. Nicknamed the 'sea cow', manatees can grow to over 3.5 meters in length and they graze on aquatic plants on the ocean floor. Among land mammals most of what we see today including the dogs, cats, pigs, boars, horses, rats and mice were introduced by the Europeans.

Reptiles and amphibians are not particularly abundant, but the species unique to this island are invariably under threat. In the mountains there are yet more species such as Antillean siskin and the white necked crow, the green tailed warbler and numerous butterfly and hummingbirds.

Indigenous species and wintering birds from North American mainland frequent the Dominican Republic. The Hispaniolan parrot, woodpecker, traogon, parakeet, the palmchat and several types of owls and pigeons including the white crowned pigeon nest here. Great egrets, American frigate birds, brown pelicans, blue herons, glossy ibis and ruddy ducks and flamingos are relatively common especially on the off shore islands of Dominican Republic and around the numerous lakes and lagoons on the mainland.

In a country with the highest and lowest points in the West Indies, it is not surprising to find impressive plant life. The most common are the subtropical forest, and lush green, exotic and eminently healthy landscape associated with the Caribbean. Royal palms, coconut palms, Hispaniolan mahogany and West Indian cedar, wild olive, American musk wood and others are popular. The Dominican coastline boasts of red, white and button mangroves - a wondrous sight amidst the steep mountain cliffs indeed.

When to visit Dominican Republic

Anytime of the year is good time to visit this place. The climate is warm and generally sunny all year round. Some call the weather here as 'the endless summer'. The busiest tourist season is although December through April where many North Americans and Europeans visit. The next busiest periods is the summer months - June through September, during the vacations.

There are slight variations in climate between the summer and winter months. The so called cool or winter season runs from November to April. Now the humidity is low and it tends to be cool down in the evenings and the coastal beach regions experience highs of around 28 degree C during the day and lows of about 20 degree C in the evenings.

The mountainous interior is relatively cooler and the highest mountain peaks can drop below the freezing point. On rare occasions, frost can also be sighted at the top of the peaks.

The heaviest rainfall is between May and November. Torrential downpour like conditions can certainly occur in all areas of the Dominican Republic. But showers tend to be short lived and the sun shining brightly returns within half an hour.

Like most of the Caribbean, this Republic is located in an area where hurricanes can occur. The Caribbean hurricane season runs from the beginning of June to end of November. Historically, most of the hurricanes have taken place during the months of August and September.

A typically Caribbean fare awaits the tourists in the Dominican Republic. With lots of tropical fruits, rice, beans and seafood, it is great to taste.