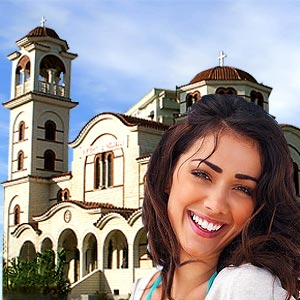 Unscathed by globalization, Albania, a heady mix of rich history and culture is the home of Mother Theresa. Albania portrays a mix of rich heritage of the Turks, Greeks, Romans and Italians.

Unscathed by globalization, Albania, a heady mix of rich history and culture is the home of Mother Theresa. Albania portrays a mix of rich heritage of the Turks, Greeks, Romans and Italians. Situated right in the heart of the Mediterranean, on the Adriatic and Ionian Seas, Albania is being looked upon as the most attractive holiday destination.

Snuggling between Greece, Macedonia, Kosovo, and Montenegro, and across the Adriatic from Italy, Albania is a natural scenario overflowing with nature's grandeur. Blue and turquoise seas, beautiful beaches, snow peaked mountains, rivers, lakes, and forests contribute whimsically to the stunning nature.

Albanians are well-known for their hospitality; they welcome tourists with heart-warming generosity. Their traditions of courtesy are as special as they are. They follow hospitality rules as quoted in 'The Kanun', or 'The Code', a 15th-century text written by the powerful Dukagjin clan. Few interesting procedures are:

Albania's present day territories were occupied 100,000 years ago. This country has been ruled by Byzantines, Greeks, Ottomans, Romans and Venetians. The numerous ancient artifacts, ruins and archeological specimens that are spread across the country divulge the rich history of this country. Ancient landmarks combined with the pristine sea beaches and beautiful country sides attract tourists from across the globe.

Berat: One of the country's most beautiful towns, Berat has been portrayed and preserved as a museum city. The collection of white Ottoman houses climbing up the hill to the castle is the major attraction and main feature of this place. This has earned this city its name 'town of a thousand windows'.

Berat was once the Capital of Albania. The castle of the city sits predominantly at the top of the hill on the slopes of the Tomorri Mountain. Dwelling houses and the 'Onufri Museum' are situated inside the castle walls. The locale offers a breathtaking view and is a wonderful place to walk around.

Tirana: Tirana is the capital city and is about a 40 minute drive from Durrës. Every wall is brightly painted to cover up the grayness of the yesteryears. An old mosque built during 1789 - 1823 is situated in the main square named Sheshi Skënderbej. The fascinating national museum and the clock tower are also situated here.

The museum exhibits details on communism and also displays the corresponding English explanations. The Petrela Castle is located on the road to Elbasan. The castle is located on a steep picturesque slope overlooking a river. This castle was fortified by Emperor Justinian to defend Durrës.

Durrës: The ancient port of Durrës is the second largest city in Albania. Once a colony, this place is the country's main port and is slowly transforming into a modern tourist city. This city has a touch of Italian, the bars and restaurants are a wonderful retreat. Walking along the boulevard during the evenings can be fun. The huge Roman amphitheater in the center is a memorable site in the city, supposed to be largest in the Balkans with a seating capacity of 15,000 seats.

The colossal theatre was built during 78 - 117 BC, it hosted the gladiatorial games. It contains early Christian crypt with rare wall mosaics. The relics were discovered in 1966, and it is believed that 25% of the remains are still buried beneath houses. The Archeological Museum in Durrës has a variety of ancient relics found in the area.

Kruja: Kruja is a medieval town near Tirana. It is built on the slope of the Sari Salltiku Mountain. There is a castle which houses the Museum, on the way to the castle there is a medieval bazaar where you can buy souvenirs. The Ethnographic Museum is housed within the castle area. There are also restaurants which offer a breathtaking view.

Apollonia: Apollonia is located near Fier, and is a fascinating place for a day's visit. En-route the Monastery of Ardenica is located. Don't miss the Icon paintings within the Church that date from 1743-1745. Apollonia, a ruined Corinthian city dates back to 600 BC. It is an important archeological site, the remains of the temple and the amphitheater can be seen until date. Though declared an archeological site, it is yet to be completely discovered.

Bird watching: The coastal wetlands of Karavastaja are the best place for bird watching.

Explore archeological sites: Archaeological sites, such as the abandoned city of Apollonia and the Roman amphitheater in Durrësi are wonderful to see.

Go to the beach: Sunbathe or swim on any of Albania's beautiful beaches. They slope gently into the Adriatic, they are rough further south. The lakes have beaches too.

Albania has a mild and Mediterranean climate. 300 sunny days per year, summer is very hot in Albania. Rainfall in Albania is between late autumn and early spring.

Ferry service is available in Komani-Fierza. All towns of Albania are well connected by bus. Car rentals are also available. Trains are diesel engine and infrequent and slow, between Tirana and Durrësi there are quite a few services. The hub of the national railway network is Durrësi. Trains operate from here to Tirana, and other places. There is no air travel within Albania.

Albanian cuisine is excellent; bearing the influences of both the Ottoman and Italian. Albanian tomatoes and cucumber are delicious. Albanian vineyards produce high-quality wine; few wines are produced from native grapes such as Kallmet (red) and Shesh (red and white). Grapes are also used to make raki (a clear spirit), the country's national drink.