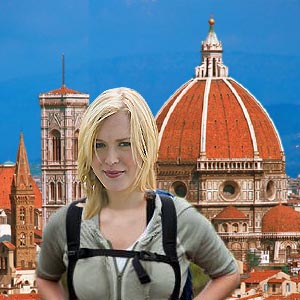 Florence, a regional capital of Tuscany, in the centre of Italy is all about great architecture, wonderful churches, magnificent museums and a sense of timelessness. Being a long-standing capital of historical times, Florence is a city of buildings and structures that beckons tourists to its world heritage sites.

Florence, a regional capital of Tuscany, in the center of Italy is all about great architecture, wonderful churches, magnificent museums and a sense of timelessness. Being a long-standing capital of historical times, Florence is a city of buildings and structures that beckons tourists to its world heritage sites.

The city is situated on the river Arno, which is spanned by the bridge Ponte Vecchio, the sole one to survive after all the bridges were destroyed in the Second World War. It lies on the main national railway line, hence can be reached from most prominent places in Italy. Florence is only two hours away from north of Rome.

Florence was found and developed by Romans in the early centuries. During the middle Ages, Florence was ruled by great characters like Matilda and was dominated by rich merchant families. Though the city prospered, it witnessed wars, conflicts and was also torn between the Guelph (pro-Emperor) and Ghibelline (pro-Pope) factions.

After going through the rise and fall, in the 15th century, it came under the rule of a banking family called Medici, who later became the Grand Dukes of Tuscany. It was the beginning of the period which came to be known as the Renaissance. These rulers left a lasting influence on the city as they built some major architectural beauties that are still standing tall today.

In the modern era, Second World War and a massive flood in 1966 caused lot of destruction to the city. Yet Florence sustained, reemerged and regained all its glory and since then continues to impress the travelers from Italy and abroad alike.

How to reach Florence?

Florence in Italy is well connected by air, rail and road. It is served by two major airports; Vespucci air port and Pisa Airport. Vespucci air port is located 5 km away from the main city and you can find local bus service running from airport to other places of the city. Santa Maria Novella is the main railway station in Florence, which connects the city to other major places of the Italy. One can opt for bus service too, as many of them run within the city and to the other places of Tuscany.

Florence is a home to some of the most remarkable art galleries, monuments and architectural buildings in the world. It is an absolute tourist's paradise.

Monuments, churches and museums in Florence

Palazzo Vecchio is the town hall of Florence since 1322. This enormous bell tower has been the political center and important landmark of the city.

Palazzo Pitti, a palatial building built by the Pitti family is located on the south of Arno River. It was designed by the great architect Bartolomeo Ammannati and houses splendid museums, like the Palatina Gallery (with Raffaello, Andrea Del Sarto, Caravaggio, Bronzino art work), the Silver Museum, the Modern Art Gallery and the Costumes Gallery. The Pitti Palace has the beautiful Boboli garden at its rear entrance, lending a soothing experience and fine view of Florence.

The Basilica di San Lorenzo is one of the oldest and largest churches located at the center of the Florence with a distinctive architectural style. All the key members of the Medici family were laid to rest in this place. At the back of the church of San Lorenzo lies the Medici Chapels Museum displaying the interesting sculptors, architectural ornamentation and great art works by Baroque goldsmiths.

The Basilica di Santa Maria del Fiore is the cathedral church (Duomo) of Florence. People throng to see the very popular dome with 463 steps designed by Brunelleschi. Its exteriors are made with interesting poly-chromed marble covering.

The Baptistery of St John is considered to be the oldest building in Florence. It is well-known for its three sets of spectacular bronze doors and beautifully decorated exteriors with green and white marbles

Giotto's bell tower is situated on the Cathedral square (Piazza del Duomo) in Florence. This 85-meter high bell tower is a real representation of the gothic construction, built during 14 th century. It was designed and built in three different stages by three architects like Giotto a mastermind, who initiated and carried forward the mammoth art work, Andrea Pisano and Francesco Talenti

The Uffizi Gallery is the most sought after museum of Florence which houses some of the finest Renaissance art and also the masterpieces of famous personalities like Michelangelo, Giotto, Botticelli, Leonardo da Vinci, Perugino, and Raphael.

The Academia Gallery is the most captivating museums of Florence which flaunts paintings, dating from the 13th to the 18th centuries. It is also popular for Michelangelo's David, the outstanding and legendary sculpture in the world.

Piazza del Signoria, a famous square in Florence is an outdoor sculpture gallery which holds some important statues of historical value including a copy of Michelangelo's David. Since the Middle Ages, the piazza has been Florence's political center.

For shoppers, Florence throws plenty of irresistible choices to choose from. One should not miss market around piazza San Lorenzo; you will be charmed by the open air markets selling food, clothing and antiques. If you are a foodie, Mercato Centrale is the place to explore for eateries and related food items. For wine lovers, city offers some of the best wines, champagnes and cocktails. Florence specialties include steaks of beef, white beans cooked with sage and olive oil and tripe. If you are looking for some 'easy on pocket' quick bites, fast food outlets around Santa Maria Novella station offers amazing treats.

Stop at Delle Cascine market to pick up some good bargains. You can lay your hands on fruits, vegetables, clothing, general groceries to house ware stands, antiquities, telephone cards etc.

Summers in Florence are hot and humid. Rainfall occurs in winter accompanied by snowfall. Spring in Florence is extremely pleasant, hence can be considered as the best time to drop in. But if you can overlook the weather, summer events organized every year are feast to the senses. Music, cinema, dance and theatre come alive on the streets and into the squares. Summers are generally packed with action, vibrancy and attract highest number of visitors.

Top of the Page: Florence in Italy
Tags:#Florence Italy