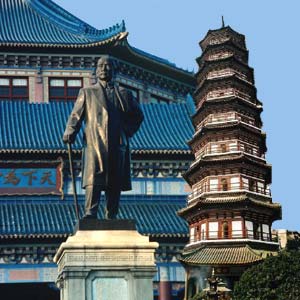 Check out travel details about Guangzhou China before you set out. This city in Southern China has a rich historical past and yet is teeming modern metropolis today.

If you are planning a trip to the southern gate of China- Guangzhou, look up important details about travel, sightseeing and more! Learn more about this historical city that is a blend of ancient customs and modern fashion and economic development.

Guangzhou China is a bustling metropolis that is also known as Sui (Ears of Rice). Characterized by an abundance of kapok flowers, Guangzhou is known as the Southern gate of China as it lies strategically close to the South China Sea, Hong Kong and Macau. As one of the first cities that opened up, there has been considerable economic development in Guangzhou. Being an important industrial and foreign trade center in southern China, Guangzhou is host to the Canton Fair that is held every spring and autumn.

With mild subtropical weather most times of the year, weather in Guangzhou is moderate though summers can be hot. Tourists visiting Guangzhou China can plan their travel during the winter months. Visitors planning to visit Guangzhou must secure a visa from the Chinese embassy. Direct flights to Guangzhou are available from Thailand, Hong Kong, Indonesia, Malaysia, Vietnam, Singapore and Australia. Alternatively there are hovercrafts and cruises from Hong Kong. If you are contemplating going for the Canton Fair held in Guangzhou, ensure that you make hotel reservations in advance.

Sample Cantonese Cuisine (Yue Cai) – a regional specialty. The Cantonese style of cooking is marked by light, fresh meals that also change with seasons. Snacks such as dim sum, radish cake, steamed zongzi (rice wrapped in leaves), fried river snail, jidi porridge and pot rice are popular. From royal Chinese dishes to regional specialties from all over China, you can taste them all at Guangzhou.

With its rich historical past, Guangzhou offers many historical sites too. Take an evening cruise along the Pearl River and enjoy Guangzhou at night. On the banks, you will find many new buildings housing banks, hotels and commercial establishments. You can shop in Shangxia Jiu Lu, Beijing Lu and Di Shi Fu Lu

Sun Yat-sen Memorial Hall: This magnificent structure was built to commemorate the work of Sun Yat-sen. This octagonal building rich with Chinese symbolic construction and color is home to large meetings and performances.

Ancestral temple of Chen family: The ancestral shrine is housed in a rectangular building that is designed and decorated in traditional Guangdong style, replete with brick carving, pottery carving, brass and cast iron workmanship and wood carving. Today it functions as the Guangdong Folk Craftwork museum.

Yuexiu Park: Named after the Yuexiu Mountain, this park has 7 hummocks and 3 artificial lakes. With freshly blooming flowers and thriving bamboos, this place is popular with tourists coming to Guangzhou. The spring flower and chrysanthemum exhibitions are a sight to behold. Visitors to Yuexiu Park can catch the azaleas in late spring, yulan magnolias in April, and the kapok in early spring. You can catch pavilions built in elaborate Linann-style of architecture as well as towers and corridors. Do not miss the Zhanhai Tower and Ancient City Wall of the Ming Dynasty.

Temple of Six Banyan Trees: This spot has been an ancient monastery and temple complex. Built originally during the reign of Emperor Wu of the Southern Liang Dynasty, this place offers tourists a rich collection of cultural relics. The pagoda in the temple is known as Six Banyan Pagoda or Flowery Pagoda. Visitors will find the Laughing Buddha as they enter the Tianwang Hall.

Baiyun Mountain: Also known as the White Cloud Mountain, tourists to Guangzhou will marvel at the natural beauty of this mountain range from where one can get a scenic view of the entire city. This is a popular summer resort with scenic spots such as the Mingzhu Tower, Moxing Ridge, Baiyun cableway, Mingchun Valley and Luhu Lake. The summit is often bathed with clouds. Tourists can enjoy slideways and bungee jumping here.

Guangzhou Zoo: Another attraction in Guangzhou is its zoo, famous for the largest overland ocean exhibition house and the country's largest butterfly ecology garden. You can catch the panda, golden monkey, elk, black-necked crane and the South Chinese tiger. The Ocean World is part of the Guangzhou Zoo and offers many submarine wonders – Fresh Water World, Sea Turtle Pool, Shark Hall, Ocean Theater and Seaweed Pillar.

Space Flight Spectacle: A visit to the SFS promises to take you into the realms of the mysterious universe with a simulated space flight. Experience the rocket launching process at the Rocket Launch Command and Control Center here.

Bright Filial Piety Temple: This temple is ancient and is home to many antiques. The mushroom-shaped Grief Bell boasts of vivid embossments depicting various aspects of Buddhism. The stately Grand Hall, washing bowl spring, iron tower and stone bell represent aspects of Buddhist culture and the history of Guangzhou.