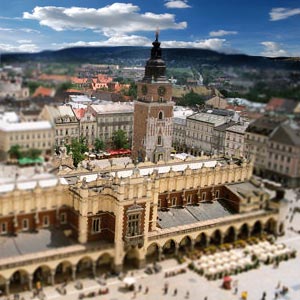 Labeled as an indestructible nation, Poland has risen majestically to march into the contemporary 21st century brushing aside the bruises of non-stop invader treading. Modern cities, pastoral countryside - Poland is a beautiful mix of the old and the new, a country laden with history and culture.

Poland has been repeatedly trampled by countless invaders in the past. Labeled as an indestructible nation, Poland has risen majestically to march into the contemporary 21st century brushing aside the bruises of non-stop invader treading. Modern cities, pastoral countryside, Poland is a beautiful mix of the old and the new, a country laden with history and culture. The beautifully reconstructed Old Town offers modern restaurants serving world class cuisine, attractive cafes, 24x7 clubs and also farmer women selling bunches of flowers.

Poland, an enormous land right in the heart of Europe is an epitome of non-stop changes. The cities have been re-constructed to suit the modern civilization while the southern parts of Poland retain their rustic grandeur. Tree-clad mountains, horse-drawn carts carrying hay from the fields are wonderful sights not to be missed. Poland's northern parts flaunt 14th-century Gothic castles, as well as the spectacular old towns of Zamosc, Krakow and Gdansk. The northeast parts have primitive forest shelters and herds of wild bison. The eternal scenery, nature reserves, and national parks make Poland a major tourist destination.

Poland, a major hub for Nazi forces during the World War II, is now considered one of Europe's most modern countries. A country that was dreadful for its own residents is now regarded a safe, friendly country that extends a warm welcome to its tourists.


Poland offers old, rustic and contemporary attractions to its visitors. Listed below are the popular attractions of Poland


Old Town: This town was rebuilt from the available original plans and paintings of the 17th and 18th centuries. The original town was destroyed during the World War II.

Old Town square, rynek: Hop into an outdoor cafe, check out the historical Museum and the antique shops.

The Warsaw Rising Museum: This museum provides brilliant learning about the history of Warsaw, educational and interactive. The museum showcases artifacts, testimonials, slides that portray the active participation of the Warsaw residents in the resistance.

The Palace of Culture and Science: Take an elevator to the 30th floor observation deck and get a great view of Warsaw. This structure was gifted by Josef Stalin to Poland in 1953 as a sign of Polish-Soviet friendship.


The Krakow Gate: It was built in the late 14th century and was remodeled in 1782. It is considered an architectural symbol of Lublin and is the main entrance to the Old Town. It also houses a historical museum.

The Cloth Hall: Declared as one amongst the 12 most significant historical sites by UNESCO, the cloth hall retains an appealing medieval setting. It is located in the center of the central Market Square; it was reconstructed in the 19th century.

Wawel Castle: This castle has the world's largest collection of 16th-century tapestries and also houses a gothic cathedral.

Wieliczka Salt Mine: The total length of the corridor is 350km, of which only 2 km is open to visitors. The tourist route is located 209 to 443ft, i.e. 64 to 135m underground. You get to see bas-relief, extraordinary chambers, chandeliers and a chapel - all sculpted in salt.


The medieval walled town can be experienced by walking past the gothic Old Town. Torun is popular for its gingerbread and for it's leaning tower, the leaning tower having a vertical deviation of 4.5 feet.


Jasna Góra monastery complex: This place houses the picture of the Black Madonna and is popularly known as the miraculous painting of Our Lady, the painting is believed to have been painted by St Luke.

Wroclaw (Breslau)'s 100 bridges: You can locate 100 bridges in this place; few of them are cross canals that connect 12 islands of this place. Significant sights include the Ethnographic Museum in the Royal Palace; the 15th-century Town Hall that has now been named the Historical Museum; and the Cathedral on Ostrow Tumski (Cathedral Island).


Hiking: Hiking is popular in the national parks and nature reserves of Poland. Bieszczady National Park, part of the Carpathian mountain range, encloses the existing fragments of the Great Bieszczady Forest, the Kampinos National Park, near Warsaw, etc.

Nature trails: The last major refuge for the European bison, the Bialowieza National Park is a great park to go on nature trails. The park is home to extraordinary forest-dwelling species and trees that are over 400 years.

Sun and ski: Bathe and relax on the Baltic coast. Poland has several popular beach resorts including Sopot.

Climbing: Climbing and winter sports is very famous in Zakopane, the gingerbread wooden cottages provides the ambiance of a fairytale. Few of its residents wear the traditional Goralskie dress. The glacial lake Morskie Oko, the beautiful Koscieliska Valley, and the mountain of Kasprowy Wierch is worth a visit.

Sailing: Sail a boat in the Mazurian Lake District as this district has close to 1,000 lakes. This place is also a favorite angling destination. Local towns such as Mikolajki and Gizycko host sea shanty festivals.

Paying tribute: Pay tribute to the victims of the holocaust at Oswiecim-Birkenau concentration camp, 70km (43 miles) from Cracow.

Theatre: Experience the theater in any of the major cities.


Hotels: Most major international hotel chains are present in Poland. Apart from this, you can find numerous boarding houses, tourist hotels and motels.

Youth Hostels: There are over 150 hostels in Poland which are open throughout the year, during summer season there are around 450 hostels open for public.

Rural/farm stay accommodation: Agricultural tourism is a recent concept that has evolved. These accommodations encourage the concept of living closer to the land. Few of these accommodations serve organic food and promote outdoor activities while a few places offer horse riding alone.

Camping/Caravanning: There are over 200 campsites in Poland. Facilities include canteens, washrooms and food kiosks. The main camping season is from June to August; popular places to camp include the Great MalsurianLakes region, the Baltic Sea coast, etc.


Poland has a distinct cuisine though it has a mild influence from the ccuisineof France and Italy. Conventional Polish cuisine is rich in meats, sauces, and vegetables, etc; pickled vegetables are served on the side. Modern Polish cuisine has a greater variety of food and is much healthier.

Soups are the main part of a meal and are very rich and thick. Barszcz, beetroot soup though thin and clear is often served along with small hot pasties. Pierogi is the most popular Polish dish and is usually served with another dish. Bigos is another unique Polish dish made from various meats and vegetables using a base of pickled cabbage.

Poland is also known for two exclusive cheeses, both hand-made in the mountain region in the south.

Oscypek a hard and salty cheese is made from non-pasteurized sheep milk, and smoked. It goes well with alcoholic beverages like beer and is the most famous type of cheese.

Bryndza is a soft cheese made from sheep milk and has the consistency similar to cheeses that can be spread. It is typically served on bread or baked potatoes.

If you want to eat economically, you should visit a milk bar known as bar mleczny. A milk bar serves basic varieties of fast food and cheap Polish fare.


Handmade jewelry with amber and silver, dolls in regional costumes, glass and enamelware, hand-woven rugs, silverware, woodcarvings and clay and metal sculptures are typical of Poland and must-buys. Shopping hours is between 1000 and 2000 hrs Monday-Friday and between 1000-1600 hrs on Saturday.


The climate of Poland is always pleasant, summer is warm, autumn is crisp and sunny and winter is cold. South of Poland is covered with snow from mid December to April. Poland experiences rain fall all through the year. May to September and July and August are the busiest travel months.


Poland is served by all international airlines. The main airports of Poland are Wroclaw (Strachowice/Copernicus), Warsaw FredericChopin Airport, Krakow (Balice John Paul II), Katowice, Gdansk, and Lech Walesa Airport. All major cities of Poland are connected by the domestic airlines of Poland.

EuroCity trains connect Poland and a number of major European cities. Cheap and efficient inter-city trains are operated in Poland. There are two classes of travel and trains are often classified as Inter-City, express or local.

Poland can be reached by road from the Czech Republic and Germany. Regional buses are available, you can also hire car for local travel. Port of Gdansk and the Port of Gdynia are the main ports in Poland.


A few common practices in Poland are unique and are worth a mention.