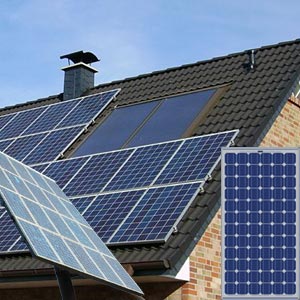 The initial cost of solar power panels and systems is significantly high. But the renewable nature of photovoltaic technology, low cost of maintenance, numerous incentives and tax benefits offered by the US government make residential solar panels an attractive and viable investment for powering homes and offices.

Solar panels are environmentally friendly and clean means of collecting solar energy, renewable energy from the sun. It is estimated that on any bright sunny day approximately 1000 watts of energy per square meter of the planet's surface can be collected from the sun. This can easily power multitude of homes and offices.

The term solar panels was traditionally applied to any flat solar thermal collector, such as hot water or air panel used to heat water and air. But these days 'solar panel' refers to photovoltaic module which can be described as an 'assembly of solar cells' which is used to generate electricity. The panels are typically flat and available in various heights and widths. Solar panels are widely being used in residential, commercial, institutional and industrial applications.

Photovoltaic (PV) is the particular field of technology and research that is related to the application of solar cells for converting solar energy into electricity directly. The term 'photovoltaic' is of Greek origin, with 'photo' meaning 'light' and 'voltaic' meaning 'electric.' The term photovoltaic can be technically described as 'unbiased operating mode of a photodiode' and current is due to the transduced light energy. The photons of light knock the electrons into higher state of energy to create electricity.

Usually solar panels include solar cells designed to convert light energy from a wide range of light frequencies into electricity for maximum efficiency. In a photovoltaic panel, the solar cells are electrically interconnected. Solar panels can either be connected in parallel or series depending upon the design or objective of use. Serial connections give optimal voltage, whereas the latter gives optimal current source capability.

Infrared solar cells render greater efficiency with the ability of the panels to function at nights at well. Heat, cold, moisture, wind and snow can irrevocably damage the solar cells which have to be protected from the elements to enable them to work. They have to be transported efficiently and stored properly.

The market is flooded with several varieties of solar panels. The most common among them is 'silicon crystal' panel. Silicon panels are efficient and work for five to seven years of power production. Thin film solar array is another newly emerging technology. Here the solar panels are made utilizing lesser material when compared to solar panels by traditional methods. However, they are deemed as less efficient than the established crystal arrays. By and large there are two major types of technology that is used in solar panels:

Flexible thin film :the cells are created on a flexible substrate such as an insulating polymer film.

Thin film solar cell: These are slimmer and require lesser materials and energy for construction. They are therefore economical though construed as less efficient. Instead of using hard crystalline silicon, the technology involved is to put extremely thin films of photovoltaic material onto a thin layer of backing. One means of doing this is through 'solar ink'.

Here the photovoltaic material is dissolved into a solution and then printed into ink. Printing can be done on thin layers of plastic, metal, or fabric facilitating mass production of solar panels at high speeds and lower costs.

Highly refined purified silicon crystals are used to make solar cells and used in the manufacture of integrated circuits and computer chips called wafer silicon. However, the cost of silicon solar cells is prohibitory; coupled with their complex production complex.

Organic/ polymer solar cells: This is an organic solar cell or organic chemistry photovoltaic also called plastic solar cell. Electricity is produced from sunlight using polymers. This is relatively a new technology. The performance of organic polymer devices depends much on absorbing as much light as possible converting the photon energy into free electrons and minimizing resistance in the process.

Polymer cells in comparison to silicon solar cells are lighter in weight. They are also inexpensive and disposable, flexible and can be customized at molecular level.

Another ideal material for top cell absorber is protocrystalline silicon of multi junctions like tandem cells. While short wavelength light is almost completely absorbed in the photocrystalline top cell absorber without being transmitted on the other hand long wavelength light is low loss transmitted into the bottom cell absorbed which if composed of amorphous silicon absorbs most of the red part of the solar spectrum and allows proper current matching in the complete solar cell.

Nanocrystalline silicon which has made rapid progress in the last couple of years is a quality photoactive layer for solar cells. 10% efficiency is achieved by deposition of crystalline to amorphous transition, at high pressure depletion condition; by taming of ion energy and grading of the material growth at reduced unwanted dopant incorporation.

These days many are looking for alternative energy sources to power their homes and offices. Photovoltaic panels probably are the best solution.

Solar power can be deployed in homes as it is especially affordable. In order to encourage the photovoltaic panel technology, the Federal and the State government in the US have passed legislation on a feed-in tariff designed to enable people to invest in their own solar power generation. The government also provides large tax discounts and benefits to those installing residential solar panels.

Apart from the savings on energy costs, solar panels are environment friendly and easy to use. Homes in the sunny regions of the US can most benefit from solar power which is a cost effective option. With the increase in the number of residential solar panels, there would be enormous amount of energy saved as well.

Again, solar panels need not be used to power the entire home; instead smaller rooms and outdoor gardens or greenhouses can be applied with solar panels. Probably, a pool could be well heated during winter months or a driveway at night with solar power.

Whereas buying new residential solar panels would cost a fortune, it would be wise to go in for used solar panels which could cost lesser and only about 10% of efficiency would have been lost even after twenty odd years.

Interestingly, the largest solar panel in the world is under construction in the south of Portugal. This 52,000 photovoltaic module, 11 megawatt facility covering a 60 hectare region is estimated to produce electricity for 21,000 households.

Solar roof panels for homes are extremely durable with a life expectancy of thirty to forty years. Solar roof panels refer to a particular type of solar panel which is meant to be placed on the roof of a house to collect photovoltaic energy to convert to electricity. The roof is an ideal location for photovoltaic panels as it tends to catch more direct sunlight than other locations. It also reduces the visual footprint of solar panels which many may find unsightly.

Solar panels contain liquid that runs through the pipes attached to an absorbent panel. In home roofing, the liquid is water. This absorbent panel is coated with deep black coloring to help absorb as much sunlight as possible. Such energy absorbed by solar roof panels can be stored in batteries to power the household. While in the past solar roof panels were primarily used by people in remote locations, who were off the local power grid, in recent years, with the rising energy costs and growing environmental awareness, many people in cities have turned to this alternative source of energy.

These days the problems of heavy frame solar panels for home is solved by choosing thin film panels which do not require the same attachment. In homes, solar roof panels, provides hot water for showers, laundry, and sinks and used for heating systems. The surplus power generated by the solar panel roof can be sold to the electric company thus making for immediate return on investment in solar panels.

In a typically new type of photovoltaic system, solar roof panels are commonly called 'solar singles'. Although they are similar in operations to the traditional photovoltaic panels, these are smaller and more aesthetic. They can be installed on the roof of normal roofing shingles and remain undistinguishable from normal roofing materials in a similar color.