RFID (Radio frequency identification) has been around since a few decades but the prohibitive cost of RFID tags and systems prevented it from being widely used. Wal-mart, the world's largest retailer has embarked on a phased implementation of RFID system. Here is an article which delves into the technology that drives RFID.

RFID stands for Radio frequency identification. The concept of using Radio Frequency to identify objects dates back to World War II when the RF was used to distinguish between returning English airplanes and the German ones. IFF or Identification Friend or Foe is another area where a device aboard an aircraft is queried by a ground based device. The returned reply contains a code which identifies the aircraft as a 'friendly' one.

Find out how RFID tags have been creating a silent revolution in tracking systems. RFID is not just for smart store shelves alone - they can also aid in locating children in amusement parks. Combined with GPS and active RFID technology they can be the wonder application of this century.

The declining cost of RFID systems along with improved sensitivity and durability has increased its usage potential in the logistical, planning and supply chain process. The distribution and retail industry can be greatly benefited from the security, access and control features of RFID solutions. A small RFID tag is imbedded in the layers of a carton. This aids easy location and tracking. Walmart is pushing for RFID technology in a big way.

Walmart had directed its top 100 suppliers to ensure that all cases and pallets contain RFID chips. Walmart - the world's largest retail outlet has ratified RFID application. This is seen as a boost to the chain efficiency as well as check on pilferage. You can find RFID systems in clothing tags, missiles and even food items.

The other big names that have adopted RFID technology are Gillette, Tesco and Department of Defense (DoD). RFID companies range from Microsoft, IBM, GE, TE and Sun Microsystems. Wal-mart has expanded its RFID application to the next 200 suppliers from January 2006. This decision has far-reaching effects on many companies who are part of the supply and distribution chain.

This ripple effect will spur RFID manufacturers to reduce prices on account of the volumes involved. When combined with GPS application, the RFID solution can be a path-breaker in comprehensive tracking systems. Wal-mart RFID system is intended to reap benefits in the form of feedback data that can lead to improved inventory and sales velocity and aid in forecasting.

A typical RFID system consists of an antenna and transceiver and transponder (RF tag). The transceiver reads the radio frequency and transfers information to a processing device. The transponder or RFID tag is an integrated circuit that contains information to be transmitted. RFID technology uses radio waves for identification. An RFID tag is made up of a chip and antenna. The antenna allows the chip to transmit the information that is used for identification. The reader sends electromagnetic waves, which are received by the tag antenna. RFID technology differs from bar code systems in that it is not a line of sight technology.

RFID tags are helpful in tracking an individual item through the different locations it moves through. A case in example is the use of RFID systems to move cars through an assembly line. At different stages of the production process, it keeps the computers informed about the next step in the assembly line. An RFID tag can be either active or passive. Passive RFID tags use the electrical current induced in the antenna by the incoming radio frequency scan. This means that the response of a passive RFID tag is brief.

The commercially available RFID products using passive RFID tags are thinner than a sheet of paper. Active RFID tags have their own power source that enables longer range frequency as well as larger memory capacity. This allows it to store additional information. A typical RFID active tag has a battery life of several years. Passive RFID tags are more commonly available on account of their cheaper cost of manufacture. With passive RFID tags costing about $0.25, it is poised for wider commercial application. Varying levels of radio frequency give rise to different kinds of RFID tags:

Active RFID tags are used to track high-value goods that need scanning over long ranges. A read-only RFID tag does not allow for any change to the information stored on it. Read-write RFID tag allows additional information to be added on to it.

RFID solution was too expensive for commercial usage though it was a proven technology since a few decades. Lack of standards was another inhibiting factor for widespread use of RFID technology. The International Organization for Standardization (ISO) is working on standards for RFID solutions. ISO 18000 - 3 deals with high frequency tag usage whereas ISO 18000 - 6 deals with ultra-high frequency tags.

Thousands of companies worldwide have resorted to RFID systems to improve efficiency in production as well as security features. Intelligent software agents are used with RFID applications so as to automate routine decision-making. Only situations that are out of the ordinary will be brought to notice. The FDA has issued a ruling in July 2004 that will review the use of RFID systems to identify patients and regulate the access of hospital staff.

An RFID enabled label needs to be selected according to the RFID frequency and protocol. The critical measure of the capability of an RFID label is its ability to be read from the necessary distance. RFID technology is also being applied to specific applications such as animal husbandry, sport time recording, vehicle anti-theft systems and controlled access to parking facilities and fuel depots. Newer developments in RFID technology are paving the way for larger memory capacities, wider reading ranges and faster processing. 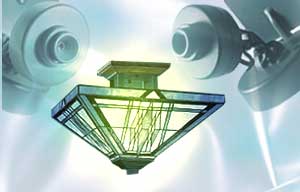