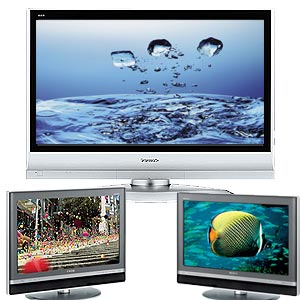 If you want to replace your old television with a new one that saves space and offers good digital clarity, with value for money, take a look at the plasma television. The thin, flat screen plasma TV with crisp, clear images on a huge screen with a wall mounting option is a favorite choice of consumers who seek to complement home décor and home entertainment system alike.

The arrival of newer plasma technology and its nearest competitor the LCD (liquid crystal display) has made the ubiquitous television more decor friendly. The CRT models demanded the use of heavier and bulkier picture tubes. In a plasma television, the cathode ray tube is done away with and the use of plasma technology has led to light weight television panels that are slim, thin and really sleek.

Digital Television (DTV), Digital videodisc (DVD-Video), digital satellite broadcasts and computer video, plasma technology in plasma TV is the perfect format to enjoy improved image quality of all these digital video sources. There are other competing technologies like DLP - Digital Light Processing - primarily used in projectors and LCoS - Liquid Crystal on Silicon - which is again used in projection televisions.

The latter uses liquid crystals instead of the matrix of mirrors used in DLP. Flat screen plasma TVs present clear images that do not wash out under bright lights. These TVs offer ease of mounting and viewing from extreme angles. Another advantage of plasma technology is that it is not affected by magnetic fields. With its high-impact picture quality and plug and play facilities, plasma TVs are ideal for video conferencing and home theaters.

Plasma technology closely resembles the technology used in fluorescent bulbs. The plasma TV display panel is flat, now commonly used for large TV displays (for 32 inches and above). The flat screen enables uniform image with no edge distortion. The display panel consists of an array of tiny cells called pixels. The hundreds of thousands of pixels are made up of three fluorescent lights, namely red, green and blue light.

The pixels contain phosphors and are positioned between two plates of glass. The plates are separated by a narrow gap in which a thin layer of neon-xenon gas mixture is coated right during the manufacturing process. When electrical impulses enter the gas, the gas is electrically charged and turns into plasma.

Ultraviolet photons are released. The ultraviolet radiation interacts with the phosphor lining thus giving off energy in the form of visible light producing exceptionally bright and colorful displays on the flat screen. The images are bright as during the process each of the hundreds of thousands of pixels is lit individually. This attributes to good viewing from almost every angle.

Determine budget: Since the time the first Plasma TV was introduced in the market, the prices have fallen drastically making plasma TV within the reach of more and more consumers. Determine your budget and decide on the features that ensure value for money. The screen size highly influences the price. Smaller screens are available for as less as $2000. The price of plasma TVs over the above the typical 42 inches increases drastically.

Define screen size: Select the largest screen size your room (include the viewing distance) can accommodate. This eliminates the need to sit too close or too far for an enjoyable viewing experience. Further, ensure that a minimum of 3 inches space is left vacant around the unit and the entire room particularly near the unit is sufficiently ventilated. If you are not sure about the optimal Plasma TV screen size suitable for your room, use guidelines available with the retailer.

Higher the resolution, better the picture quality on the screen and sound. Plasma HDTV -high definition TV uses a digital display, the new and latest standard for broadcasting set by the Federal Communications Commission. In a Plasma HDTV, a million or more pixels combine to create clearer and crisper images. The pictures appear sharper and more realistic compared to a normal TV. You can see the difference, enjoy 'an in-house theatre experience' especially while watching theatrical movies on plasma TV.

A plasma HDTV enhances TV viewing experience as you benefit from higher picture sharpness, larger picture, more colors, wider picture as well as multi-channel digital CD quality. As a consumer, look out for a plasma HDTV with a normal native pixel resolution of 1920 x 1080 or slightly lesser.

Plasma TV is well known for its color accuracy. However, the over-all picture quality on screen is also influenced by other features like color reproduction, brightness and contrast. When you are in the process of plasma television review, check out the contrast ratio, higher the ratio the more 'real' the picture appears. The lowest is 800:1 and the new Plasma TV models in the market offer 4000:1 contrast ration.

If you are curious, DLP projection TV offers about 2500:1 contrast ratio while LCoS projection televisions offer around 4000:1. CRT offers in excess of 14000:1 contrast ratio. Test how colors look on the screen, whether they look natural and accurate and if you can spot the subtle variations in color.

TV antenna, cable TV line, Camcorder, DVD player or game stations like play station and X-box, a DVI or D-Sub port that supports PC pictures on to the plasma TV; these are the greatest compatibility options. If you are a computer professional who needs to work with multiple video formats, Plasma TV is of immense support as it can display most color television standards such as NTSC, PAL, SECAM and accept many varied signal inputs like composite Video (CVBS) - Composite Video with Blanking Signal - , VGA and SVideo.