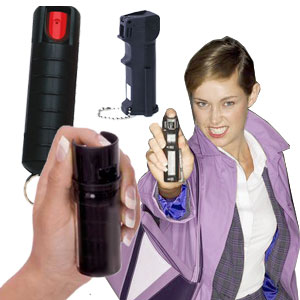 'In Kansas City Missouri a woman drove into the parking lot of a car wash. Two men approached her to give up her keys at gunpoint. The woman reached for her keys but pulled out the pepper spray on her key chain and sprayed on the two men. The men backed off and she was able to escape without harm. This woman was quoted by KCTV5 news: 'Thank God. This is something that saved my life, and it could save any woman's life'.'

Pepper spray is an extremely effective non lethal self defense agent that has the potency to blind an attacker when properly sprayed on the facial area and eyes. Pepper spray is non toxic and non flammable and is an inflammatory agent. When sprayed, the attacker cannot open his eyes for ten minutes to an hour as the capillaries get dilated and cause temporary blindness. Instant inflammation of the breathing tissues restricts all but life support breathing and this doubles the coughing uncontrollably. By this time the attacked can escape a safe distance from the attacker.

Pepper spray is a defense spray and has to be used for this purpose only. It is criminal and unethical to use pepper spray for malicious acts. An individual in possession of this spray has to imbibe the necessary education and training to make the spray work right. Pepper spray can hurt intensely and yet does not kill or leave a person maimed. Cases of death from pepper spray have been reported as asthmatics suffer from anaphylactic shock from pepper spray. Learn more about mace pepper spray and keychain pepper spray.

It is interesting to note that the process of grinding and using peppers to blind one's enemies has been happening in ancient China from times of yore. The modern pepper spray was developed and marketed in the 1960s as a 'Halt Animal Repellent'. This was derived from the slew of tear gases, mustard gases and hybrids used by military and police forces.

Pepper spray is also called O.C. spray, OC for oleoresin capsicum (CS) the active ingredient in cayenne pepper. The oils are extracted from pepper using high pressure process. The pure pepper extract is diluted with an inert ingredient that reduces the SHU or Scoville Heat Unit to get it down to a useable SHU for pepper spray. Here SHU is a unit of measurement that determines how hot something is. The rating goes from one million SHU up to five million SHU. A normal pepper spray is made up of a formula containing 10% OC at 2 million Scoville Heat Units, 2% OC formula to act fast at 5.3 million Scoville Heat Units along with identifying ultraviolet dye.

The active ingredient in this spray is 'capsaicin' which is a chemical derived from the fruit of the plant in the Capsicum genus, including chilies. Pepper spray is a non volatile substance and does not emit a lot of fumes.

Use of pepper spray

Some think that the higher the percentage the better the spray works. This is not so. It is seen that often the best pepper spray formulas have percentages between 2% to 10%. The lighter the fluid of the formula, the faster it can penetrate the attacker's mucous membranes. Pepper spray can be said to be simply the strongest OC formula permitted for use by law.

The eyes shut automatically causing temporary blindness. The mucus membranes of the mouth, nose, eyes and respiratory airways react defensively to the capsicum burn, producing tears, running nose, saliva and coughing. If the sprayed person tries to rub the eyes, the pepper spray spreads further and makes the burning worse.

It is very important to know how pepper spray is to be carried. If located in a poor place, then it is unlikely that it will be dug out during an emergency unless the purse is kept in an open pocket. Wherever it may be kept, one should be able to draw it out quickly at the time of crisis.

In this composition, OC pepper spray is combined with tear gas or CS gas, along with a UV Marking dye. Because of the strength, only a small amount is required to incapacitate the attacker. The triple action pepper spray comes as a full cone fogger and eliminates the need for pinpoint accuracy as it is effective on multiple attackers.

Both mace and pepper spray are used in individual self defense strategies. They both temporarily incapacitate the attacker. Both are restricted substances. Mace is popular name for orthochlorobenzalmalononitrile abbreviated as CN. Mace does not cause inflammation of the capillaries of the eyes and skin nor does it cause nausea, breathing difficulties and intense burning sensations. Mace has no affect on assailants under the influence of drugs or alcohol, while pepper spray can cause temporary pain even to those under the drug and alcohol influence. While in most States in the US using pepper spray is legal, use of mace and tear gas is not.

Sometimes the spray can get blown back on the sprayer or it can accidentally spray on someone else. Such circumstances warrant knowledge of antidotes that work. Since pepper spray is oil based it cannot be simply washed off using water.

Pepper spray key chain is a safe and stylish way to transport this protective weapon. A survey indicates that 75% of sexual assaults are made by strangers near the entrance of the victim's home or automobile. It is common for the victim to have her key chain out at the time of the attack. The pepper spray key chain model comes with a finger grip dispenser that can easily fit on a key chain to be held comfortably in a woman's hand. This aim makes this model ideal for emergency use. The feature of glow-in-the-dark locking safety cap in the key ring is also available. The key chain model also comes with UV ultraviolet dye for easy police identification.

The Lipstick pepper spray for women helps women to protect themselves from eve teasing or even when they are attacked. This lipstick pepper spray looks like an ordinary lipstick but contains 10% concentrated pepper spray. The cap of the spray has to be removed and aimed at the face of the nasty guy. The advantage here is the user can even spray from a distance of six to ten meters.